Homecoming – The Statue of Liverpool

A prominent Liverpool architect has designed the city’s very own version of The Statue of Liberty.

‘Homecoming’ – The Statue of Liverpool, is a stunning new 23 storey building, perched in a five storey nest, and 100 metres in diameter is being planned to sit upon the River Mersey in the city centre.

David Backhouse, who designed the award-winning Cavern Walks and the Cavern Club in Liverpool, as well as The Gardens in Manchester has now turned his expertise into giving Liverpool that one, stand-out building that sets it apart from the rest of the world.

They have consulted tidal experts and engineers – whilst also being advised by local experienced river pilot John Curry – on the positioning of the island.

Design team members Peter Foo and Gary Morris said they wanted to help create something for the city that will be a source of pride ‘not only for residents, but Scousers all over the world. It will symbolise the tradition of the city but more importantly the essence of the new Liverpool in the 21st Century, exciting and self-sustaining’. 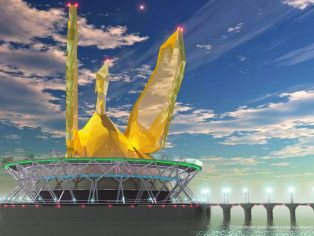