Passengers heading for Glasgow’s city centre will notice some big changes at St Enoch subway station following the completion of the first phase of its £5.3m renovation.

The major makeover to the flagship city centre station is part of a £288m modernisation programme across the network.

St Enoch’s, which serves almost two million residents and visitors per year, has a brand new station office combined with a travel centre.

The look is lighter and brighter in line with newly refurbished stations at Hillhead, Partick, Ibrox and Kelvinhall.

The revamp will eventually include new glass canopies inspired by Glasgow’s Kibble Palace, which will provide a striking feature in the heart of Glasgow’s stellar shopping district.

Lifts will also be installed – one to each platform, making the Subway more accessible than ever before. St Enoch will be the first of two stations to have lifts introduced, the second will be at Govan.

The more complex work to install the lift and new canopy will begin after the Commonwealth Games to minimise disruption to the station throughout the Games. All work at the station is due to be complete in 2015. 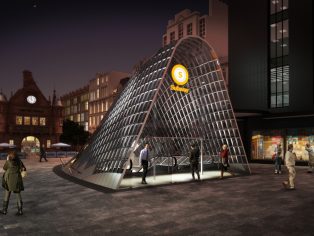