Work has started on site at the University of Huddersfield’s new Oastler Building.

Designed by AHR, the £27.5 million building will form part of the Queensgate campus and house the University’s Law School and part of the School of Music, Humanities and Media.

The six-storey building will include four 300-seat lecture theatres, tutorial spaces, offices, language labs and a Law Court, which have all been designed to fit in a floor area of 7,500sq m. Various departments are visually and physically connected by an atrium space which provides new and dynamic social spaces for staff and students.

The external facade will become the new recognisable face of the University. The curvaceous three-dimensional form of the building is defined by 42 architectural fins rising over the upper storeys, defining the architectural language of the new academic facilities and allowing glimpses into the building.

The building is expected to be completed and occupied by the start of 2017. 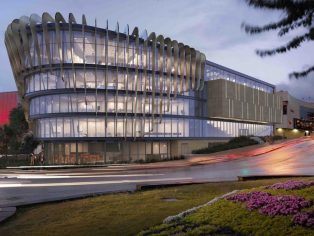