This application relates to a site of 0.69 hectares, which is roughly triangular in shape. The site is bounded by Phase 1 of the Milliners Wharf development and the the Ashton Canal to the north, Carruthers Street to the east, Pollard Street to the south and open land around the new Metrolink line to the west in Ancoats. The line of the new Metrolink runs through the site, and splits the red edge into two separate areas. The site is close to the city centre, being approximately 350m from Great Ancoats Street. The site is also close to the new Islington Wharf developments and the New Islington Millennium Community on the opposite side of the canal. To the south on the opposite side of Pollard Street there is also a mix of former mill buildings converted into residential accommodation, new build apartment blocks and low-rise housing.

The site was formerly occupied by two mill buildings forming Victoria Mill along the edge of the canal and Carruthers Mill on Carruthers Street. There were also a number of smaller outbuildings and a large servicing area to Pollard Street. Originally built as a textile complex, the buildings had been occupied by a variety of general industrial uses. Following a fire in April 2004, the Victoria Mill was demolished, and most of the site has been cleared, leaving only Carruthers Mill. Phase 1 of the Milliners Wharf development was constructed following planning consent for a mixed use development on this cleared site. The details of this are now outlined below. 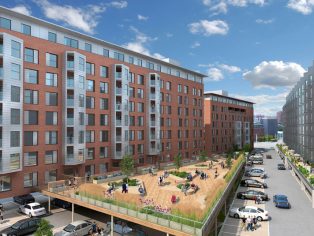