The 19th century Victorian façade will be retained with the 1980s office block behind demolished to make way for a new seven-storey, 298-bedroom hotel. The scaffold forms part of the work to enable demolition at the rear, and in order to maintain pedestrian access along Cross Street and the existing retail units contained within the development.

Controlled demolition has recently commenced and construction of the new superstructure is due to begin in the autumn. The project is scheduled to complete autumn 2017 when it will be handed over to Motel One, the budget design hotel chain, for final furnishings and staff training ahead of operational completion.

Designed jointly by Architects stephenson:ISA Studio and Leach Rhodes Walker (LRW), the new hotel will also include a restaurant and ground floor retail unit, plus a 25-space basement car park. 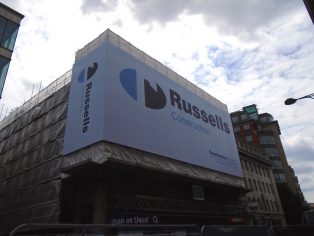