Designed by Mouchel, the new bridge will replace the old structure on the same site and will provide a footpath and cycleway on a single symmetrical cable-stayed deck structure, which will be supported on the existing abutments.

The project is expected to begin on site in summer and EWCE will commence the scheme with demolition of the existing Greystone Footbridge, which has carried a footpath across the M62 between J4 and J5 at the Knowsley/Liverpool border since it was opened in 1973. 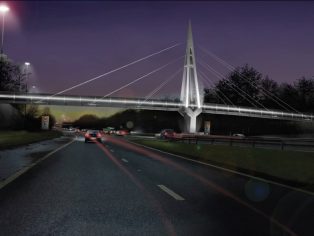