LJMU acquired the Copperas Hill site in 2011 and announced plans to redevelop the site as part of a vision to develop a connected campus by locating all students and staff in the city centre in 2013. The Copperas Hill project is part of a masterplan that covers the university’s entire portfolio of properties and it is anticipated that the whole estate will benefit from improved facilities as a result.

BDP has won the commission to design the £80 million scheme to remodel the former Royal Mail Centre on Copperas Hill in Liverpool city centre for Liverpool John Moores University (LJMU). The project was won against tough competition including Sheppard Robson, ADP and Aedas. BDP had previously worked on an initial feasibility study for the university.

A full planning application is programmed for the summer of 2015 with a view to starting work on site early in 2016. Full completion is expected in 2018.

Christal Management will be project manager for the scheme and Sweett Group is quantity surveyor. Civil & Structural Engineer is Curtins and Building Services Engineer is Arup. 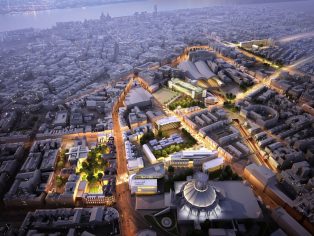