Will brick facades slip up?

Arup’s Alexis Harrison says that while the bricks sector has responded to increased demand from architects seeking to use the material in highly crafted exteriors, they still have questions about the long-term performance of brick slips.

When I joined the brick industry in 2001, it was almost on its knees. Sales had plummeted year on year in a commodity market where manufacturers fought to make and sell the cheapest red bricks to volume housebuilders and builders’ merchants.

Brick wasn’t cool, and couldn’t have been further from the palette of avant-garde architects. As product innovation manager for a major brick maker, my attention was focused on the then-Government’s Construction Task Force (led by ex-Jaguar boss Sir John Egan), which told us that the future of construction lay in modular off-site manufacturing.

Fast-forward 16 years, and brick couldn’t be more popular. Brick buildings have won the Stirling Prize for three of the last five years, and have dominated other materials in every shortlist. Whether it’s one-off houses or concert halls, elegantly crafted brick buildings feature in every edition of the architectural news sites and publications, and as you enter almost any UK city you will be greeted by shiny new high-rise brick-clad apartments.

Demand is huge. In the late 2000s the brick industry was hard hit by recession and took time to catch up with that demand, but this is now being met after mothballed kilns were relit and state of the art factories opened. Brickwork contractors are busy, but the skilled labour is out there, despite reports to the contrary.

Nevertheless, there is a strong driver for offsite fabrication of brickwork. While the systems cost more, there can be major programme advantages from using a unitised system of brick cladding – delivered ‘just in time’ to tight city sites and installed within hours to create a finished facade. The pros and cons of conventional hand-set brickwork versus offsite manufactured panels are different for every project, and are not always the right answer, but high demand for offsite solutions sees many opportunities in the market place.

The solution to offsite fabricated brickwork usually meant one thing: brick-faced precast panels, where bricks are cut in half with dovetailed slots in their backs and set into reinforced concrete to create storey-height cladding panels. This approach has provided robust and durable cladding to many buildings, and despite many architects’ concerns about the visual disruption of wide panel-to-panel joints, precast can work beautifully if the system is considered from the beginning. Maccreanor Lavington and tp bennett’s Cartwright Gardens project in central London is an example of a finely crafted brick facade that looks nothing like a unitised system.

Another approach is the application of brick slip panel systems. They vary enormously, but typically consist of a brick slip (usually a 20 mm sliver of clay either cut from a standard brick or manufactured like a tile) which is adhesively bonded onto a backing panel. This allows lightweight panels of seemingly ‘real’ brickwork to be applied to facades in a matter of minutes. Aesthetics and material honesty aside (and you would be hard pushed to tell the difference from real bricks once installed), the appeal to contractors and developers under increasing time pressure is huge.

Brick slip systems are being installed in vast areas on high rise buildings across the land, to a height of over 20 stories. Many also feature large overhanging soffits. But are these systems safe, and should we be concerned about their long term robustness?

There are a dozen or so proprietary brick slip systems on the market in the UK, most of which have emerged in the last five to 15 years. The majority of systems began as a means of upgrading the insulation on existing low-rise housing stock – insulation could be applied to the outside of say, a terrace of brick houses, and slips could be bonded to the insulation face to reinstate the neighbourhood characteristic. More recently, as new-build high rise brick buildings have become increasingly popular, the system manufacturers are keen to get in on the action, even though such systems may never have been designed for use on tall buildings, with their increased exposure and serious hazards if slips should fall.

Almost all brick slip systems rely on the adhesive bond of bricks slips onto a rigid substrate – these vary from plastic sheets, insulation boards, cement particle boards and steel sheets. Some provide a robust mechanical interlock which retains the slip should the adhesive bond ever fail, via either metal fixings or by casting dovetailed slots into thin, high performance concretes. The majority of systems however, rely entirely on adhesives.

Manufacturers and their agents are quick to point out the proven performance of adhesives, backed up with data sheets and independent tests showing huge bond strengths which only ever fail with a cohesive failure of the slip (whereby the adhesive is stronger than the slip). Likewise, our attention is often drawn to adhesive technology in automotive and aeronautical applications. But the lifespan of performance cars, planes and spacecraft is relatively short, and rigorous and regular inspections are undertaken. Buildings (especially towers) are often neglected for years due to difficult access, and frequently exceed their design life by decades.

Recent research by Arup has identified the potential for failure modes in adhesively bonded brick slip systems due to deterioration of the adhesive and/or its interfaces. For example, many adhesives are known to lose their ductility over time, meaning that they become brittle with age and have less capacity to accommodate movement of the system components. Most bricks are porous, allowing moisture and air to the interface between the adhesive and the slip. Hydrolysis and oxidation are just two of the mechanisms that can deteriorate adhesive bonds over time.

Accommodation of movement is an essential consideration in any facade system as the materials will be subject to thermal and moisture expansion through endless cycles of day and night, summer and winter. Each material has a different rate of expansion, some considerably so, and the adhesives have to take up the difference, leading to the potential of long-term fatigue. Additionally, a facade is subjected to long-term cyclical loads, such as positive and negative wind load deflections, and deflections in the primary structure under live loads.

Considering the high risk of serious injury if failure occurs, there is little evidence of adhesive-only brick slip systems being tested to verify that they avoid these known failure mechanisms. Most come with certificates from independent authorities, detailing multiple tests that have been undertaken, but there is no product standard that ensures a system will be durable. These certificates are accepted by building control officers, government departments and insurers, leading to the assumption that the systems are suitable for their application, and so adhesively-fixed brick slip systems have crept into the common language of building facades.

These concerns need to be seriously considered when specifying a brick slip system which relies entirely on adhesives, where falling slips could be hazardous. It is too soon to judge from track record alone how such systems will perform in the long term, and we are yet to see sufficient evidence from testing. Until such time, my approach is to specify brick slip systems with robust mechanical connections.

Alexis Harrison is a designer at Arup specialising in clay and ceramic materials – alexis.harrison(Replace this parenthesis with the @ sign)arup.com 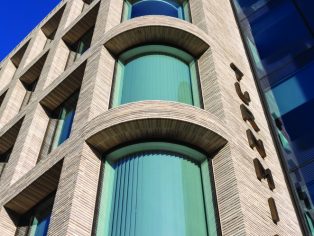