The Crown Estate’s first coworking venture, off London’s Regent Street, offers a nurturing environment for small businesses in a refurbished building which is also the first Well-accredited project of its kind. James Parker reports

A new coworking space completed in London’s West End is the fifth dedicated flexible office project that architects Barr Gazetas have designed. It is also the first coworking space in the country to be certified under the Well Standard, increasingly popular for rating office employee wellness, the project receiving Gold certification. Situated on the edge of Mayfair, the refurbished office building sits in the U-shaped side street that graced the cover of David Bowie’s ‘Ziggy Stardust,’ and which is now Regent Street’s food and drink quarter, populated by bars and restaurants. The Grade II listed building once housed a historic cinema (the ‘New Gallery Kinema’, before being adapted for various use including most recently, offices, and it has now been fully refurbished as a hotspot for the ‘megatrend’ that is coworking.

The project sees client The Crown Estate moving from its traditional role of landlord of a wide range accommodation across London and the UK, to providing fully fitted-out flexible office space which ‘members’ – i.e. people seeking office space – subscribe to, rather than lease. It enters a busy and powerfully-marketed field, with the likes of WeWork, The Office Group and LABS all providing competitively desirable coworking space. Particularly suitable to small start-ups wanting absolute flexibility as they grow, coworking offices are increasingly being adopted by larger firms (a 30-strong company now occupies space at One Heddon Street). The project offers some distinct USPs in this space however. The whole emphasis within this well-appointed new scheme is on a more relaxed, hospitality-oriented approach to workspace, where kitchens, planting and ping-pong tables are as common a sight as desks.

Managing director at Barr Gazetas Jon Eaglesham told ADF that this fed into the refurbishment’s success on the IWBI (International Well Building Institute’s) criteria, but he was somewhat shocked to find it was the only UK coworking project yet to be registered under the Well Standard, given the promises of wellness-oriented, worker-friendly environments inherent to coworking’s ethos. “It’s sort of outrageous really – you’d think the story behind coworking is all about the occupier – it’s the best space for you, it’s flexible, but actually until now, none of it has been reviewed for how good being inside the workspace is.” The Crown Estate had already plunged fully into the world of Well certification, with its HQ at nearby St James’s Market in London becoming the first office in Europe to receive Well Platinum, in 2018. According to Eaglesham, this illustrates how the client avoids a “bolt-on” approach to sustainability and wellness: “They’re not decided late, they’re always part of the brief, and actually it makes it much easier for the design team, and is cost effective.”

Eaglesham says that the brief from the Crown Estate was “non-prescriptive.” Barr Gazetas, who have worked for them on several other schemes, spent three months optioneering ways the outdated office building could be made more flexible. Eaglesham praises the client for how they “gave us enough time to actually look at it properly.” The refurbishment needed to be light-touch in terms of the structural building fabric, due to the building’s listed nature. Eaglesham says that the architects’ substantial experience in working with listed buildings has taught them that the restrictions are not now likely to be as stringent as in the past: “We try to be aspirational. It’s not about saying ‘no’ to everything any more.”

However, beyond restoring the ceilings and applying new light-coloured wall finishes throughout, the emphasis was on retaining what was useful from the building’s previous interventions, such as the timber-covered metal staircases. Eaglesham: “We retained as much of the previous fit-out as we could. Upcycling and retaining in office buildings is the right thing to do, including from a budget point of view. It also helps towards the scheme’s BREEAM credits.” Despite the relative lack of external interventions (bar a new roof terrace), the interior layout was completely changed. “We opened up the plan as much as possible,” says Eaglesham. The building would also be open to the public, via a new cafe on ground and first floor, breaking the corporate mould. This was a high-profile scheme: “All eyes were on this project, hence why we hopefully nailed the interior design,” adds the architect.

Rather than have a “giant corporate reception,” the ground and first floors are occupied by a coffee shop and bar run by Australian chain Daisy Green (here in its Little Green incarnation), Eaglesham says the client’s idea of having public lower levels is a “great use of a building.” The space is enhanced by a double-height void containing the staircase, which features palm trees. Six trees in total were planted in the office refurbishment, as well as substantial planting on all floors. The ground floor “repurposes what was an under-used office reception as a public amenity,” says Barr Gazetas, Eaglesham confirming that the new coffee shop gives the building a “real buzz.” This is slightly moderated on the second floor – the ‘arrival’ floor for visitors as well as subscribing coworking members, which has been designed as a “tranquil green oasis,” to offset the hubbub of Regent Street. In the centre of the floor is a large planted area surrounded by tan leather-covered seating, introducing an informal feel. There is also a large green wall, a technology-enhanced boardroom, and flexible venue space, the design being “all about people,” says Eaglesham.

The venue space is designed to rotate between wellbeing classes, coworking space, presentations, and entertainment, as required by members or the client. Floors three to five are the ‘core office floors,’ supporting “a multitude of agile working styles,” and each providing the same range of features and a broadly similar basic layout. Eaglesham explains: “The client liked the idea that every floor offers the full suite of working styles, rather than – as you would have in a traditional office or some coworking spaces – one floor of meeting rooms, one with amenity and kitchen, and offices on another one. The top (sixth) floor is the exception, providing a hybrid of breakout space, open plan desks, private spaces and a multi-purpose media/screening room. Each floor has a small social kitchen area (called a ‘tea point’), facing the lift. This aids “natural wayfinding,” says Eaglesham, and each floor has coworking spaces located to the left, with office and desk space on the right. Between them is a further amenity space, which on some floors house ping-pong tables, or flexible working spaces. Although each floor has a similar layout, the flexibility for users is wide-ranging.

“As a member, you can choose whether you have a fixed desk or an office, and you can specify whether that is a two, three, six or eight person office etc,” explains Eaglesham. They also get to use the amenities such as games rooms, hot desking and venue space. The architects regularly use the British Council of Offices (BCO) ‘Guide to Specification’ to “set the principles for any scheme,” and, combining the BCO’s standards with HSE guidelines, their space plan created denser areas of private office space that are offset by open, breakout spaces. Also, WC cores were introduced, providing showers and locker facilities on each floor, as well as accessible WCs. For the private offices, a “logical, cellular office layout” which follows a grid pattern to enable glass partitions be removed easily, say the architects. These also maximise natural light into the space. Eaglesham comments: “Office interior design is about trying to let as much as natural light through as possible, so there are lots of transparent partitions and glazing.”

Rooflights have been included – both flush within the floor of the terrace, and to the roof of the sixth floor above it. Curved glass sections at circulation nodes help to bring a further informality to the spaces. “At the heart of the design is a vital sense of community and wellbeing,” says Eaglesham, “interactions are encouraged throughout, with spaces for collaboration, discussion and even relaxation.” There are no artificial plants, but instead a cornucopia of growing ones, meaning plants are visible from every desk. What are said to be “relatively low maintenance” irrigation systems are hidden within the planters as well as in the green wall structure and seating in the second floor welcome area. In order to help the scheme meet the requirements of the Well Institute (which grants the certificate), the designers needed to raise the bar from BCO requirements when it came to elements such as fresh air supply (achieved using an MVHR system).

Reaching Well requirements means 14 litres per second, compared with 12 litres per second for BCO. A further constraint from the targeting the Well standard was actually a “nice limitation,” says Eaglesham, namely that materials needed to be as natural as possible, and certified. “It makes it harder to find the (natural, durable and sustainable) materials, there’s less available to you, but what there is is very nice.” Mayfair’s “rich past” was used for inspiration, with classic materials such as marble and brass complemented by more modern counterparts like chevron carpet, ash and Douglas fir for flooring and bespoke joinery, and black aluminium for frames to partitions and doors.

The repainting of the brick facade on Heddon Street (the Regent Street facade is Portland stone) was the only element where the heritage element posed a challenge, reports Jon Eaglesham. “We wanted to take the paint off and restore the brick, but it had deteriorated too much. So we repainted, but it took a very long time to agree the colour.” In the end, a lively red was chosen, contrasting with pale stone window surrounds. The spacious new terrace, accessed from the fifth floor, creates a “rare outdoor amenity in Mayfair,” say the architects.

It required removing the roof slab, extending the mansard roof up by a metre and a half to protect the space, and rebuilding the party wall. Phase 2 of the project, which is about to begin, will see a pavilion created here to add to the planting and furniture, enable more year-round use for work or socialising, so it “becomes an extension of the building rather than just an outdoor space.”

The litmus test of a project like this, in terms of success for its client – located as it is in an expensive part of town – is occupancy, and the rate since completion has been “brilliant,” attests the project architect. The spaces have “a real buzz and vibe,” says Eaglesham, now seeing a wide range of businesses, from one-man startups to bigger firms, flourishing in its relaxed but professional interiors. As well as winning the Hubble Awards’ Health & Wellness Award, the project has been shortlisted in several awards schemes.

These are the 2019 BCO Awards (London Region), two categories in the NLA (New London Architecture) Awards – Workplace, and the Wellbeing Prize – and the AJ Retrofit Awards (Office 2000-5000 ft2 category). The scheme is on the way to receiving its Well Platinum certification, which will confirm it as truly world-class in terms of wellness among coworking offerings. One Heddon Street certainly represents a big shift for The Crown Estate, which as Eaglesham says, could previously have been seen as “a very traditional landlord client.” He concludes that while this arguably remains true, this project shows they are also “establishing themselves as a leader in providing best in class flexible office space.” 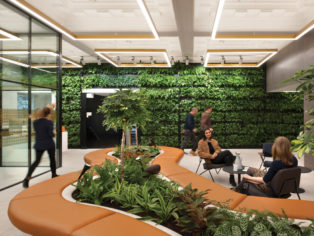 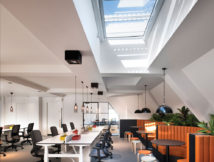 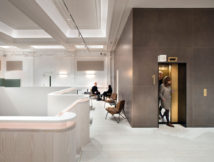 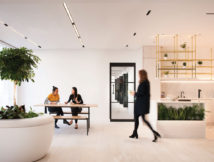 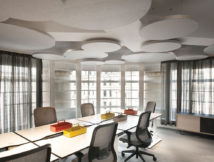