Nigel Ostime of Hawkins\Brown Architects discusses how practices can research and adopt aspects of AI and automation, and thereby stay one step ahead of the robots

About five years ago, two academics from Oxford, Carl Frey and Michael Osborne, produced a seminal report called ‘The Future of Employment: How Susceptible are Jobs to Computerisation?’ They examined how machines and digital tech might replace humans, covering 702 occupations, including many construction-based ones, ranging from the design team to the site workers. Architects were actually reckoned to have a less than 2 per cent chance of redundancy, but many site-based workers, like brick-laying and dry-lining, were about 80 per cent likely to be redundant, largely due to the dreaded and increasingly ubiquitous robots. However, before we architects got too complacent, a couple of years later father and son duo Susskind and Susskind published ‘The Future of the Professions’, which predicts the decline of pretty much all professions and describes the people and systems that will replace them. In an “internet society,” the authors tell us, we will neither need nor want doctors, teachers, accountants, lawyers – and architects (among many others) to work as they did in the 20th century. The book explains how “increasingly capable systems” – from telepresence to artificial intelligence – will bring fundamental change in the way that the “practical expertise” of specialists is made available in society. So other than sit back and start to see how much we’ve squirrelled away in our pensions, or hope the Government introduces a universal basic income, what should we architects do? One of my colleagues at Hawkins\Brown, Jack Stewart, has moved from performing a traditional architect’s role, designing and managing projects, to one developing software and writing scripts that can be used in designing buildings and coordinating the digital efforts of the practice as a whole. Tied in with our efforts to raise our skills and experience in design for manufacture and assembly (DfMA) and modern methods of construction (MMC), we hope this will keep us ahead of the curve. So what sort of things is Jack up to?

Like many practices, Hawkins\Brown has invested heavily in BIM. The benefits of it are now pretty well understood in the industry, and we are looking for new ways of using it that reach beyond the parametric capabilities and the ability to automate scheduling, costing, programming and so on. So for example we are looking at how data can generate the form. Through coding, not only can we manipulate the data that constitutes our design, but through APIs (Application Programming Interface) and built-in coding interfaces we can also manipulate the capabilities of the software we are using. An API is a software intermediary that allows two applications to talk to each other. As Hawkins\Brown’s Jack Stewart says, “We are no longer at the mercy of the buttons that Autodesk give us – we can build our own!” We are already seeing several projects in the office benefit from this, including the Olympic legacy project Here East in Stratford, east London (pictured above) where we developed a code that allowed us to rapidly ‘optioneer’ unique designs of glass frit patterns for the building facade, whilst fixing the solar control performance. Once a pattern was chosen, the code was then used to automate the setting out of every single dot that made up the frit. (There were about 8 million of them.) Jack’s work at Here East also includes 23 artist’s studios built using the Wikihouse toolkit. The studios are arranged as objects – we call it a ‘cabinet of curiosities’ – on what was a huge steel gantry for plant when the building was originally used as a media centre for the Olympics. The Wikihouse toolkit enables the delivery of modular plywood buildings, precision manufactured using CNC milling machines. To do this we collaborated with Wikihouse to develop a flexible design tool with which users can alter the design parameters such as roof type, footprint, height and so on – and watch the 3D model regenerate itself live. The construction detail of the Wikihouse system was embedded into the software at the concept design stage and formed the production information that could then be automatically regenerated with each design change. Once it had been checked, the data was sent in the form of cutting files, directly to the CNC machine for fabrication. More recently, we have been working on a facade colour pattern code dubbed the ‘spandrel-iser’. This script was used for the East Village project (also in Stratford, in this case a 525 unit residential tower) and enabled the design team to rapidly test different colour palettes and percentage mixes of colour for over 3000 spandrel panels. A manual process, that would have taken one person weeks to develop a single iteration, became live. The design team could tweak the mixes and watch the 3D model instantly update. Jack is not alone in his digital endeavours – another colleague, architect Harriet Redman has developed a digital briefing toolkit. There is huge benefit in learning from previous projects and passing it on to their successors and this is something clients are increasingly alert to. It can be difficult to extract the right information from a project to allow comparison though. Harriet’s briefing tool allows us to rapidly evaluate past projects by automatically extracting data directly from BIM models. This data is then critically analysed to help learn lessons, providing benchmarks from best-in-class buildings that inform area requirements, adjacencies and so on, in our new projects. Having an optimised brief that has been assessed in this way makes it all the more reliable, and reduces the risk of needing to adjust it further down the line.

We have developed the briefing toolkit predominantly for further education projects. In the residential sector, my colleague Michael Judd has been developing a family of standard flat types as BIM families that are adaptable across a number of different offsite manufacturing processes. Their design has derived from the same data-driven approach as the education tool, with over 1500 flat types analysed. We are producing this work collaboratively with two other architectural practices for a large housing provider client. This work will revolutionise the ability of clients to implement design for manufacture and assembly (DfMA) processes whilst delaying commitment to a single supplier. The tool will be transformative and streamline the design process in a way that has been unimaginable until recently.

The prospect of robots taking over our jobs in all spheres of commerce, white collar as much as blue, is becoming an ever more prominent topic in our daily conversations and media debates. But the technology also brings the promise of opening new avenues to explore for those willing to invest. Those who accept the challenge and adapt will thrive, while those who don’t may find the forthcoming disruption an existential threat. We can’t stop the march of technology – architects need to be leading it to ensure our social, aesthetic and professional values are embedded into the new programs. Hopefully, we can stay one step ahead of the robots. 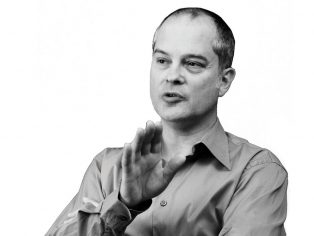