Is ventilation being overlooked in the drive for improved home energy efficiency?

Using high performance insulation within the fabric of a building is key to meeting increased energy efficiency demands. But as designers look to enhance the air-tightness of new properties, are they paying enough attention to ventilation? As Rob Warren, head of technical at Celotex explains, it appears UK house builders are becoming increasingly hot and bothered on the issue of overheating in homes.

Changes to Part L for the Conservation of Fuel and Power have been in place since April 2014 and require new dwellings to further reduce CO2 emissions by 6 per cent over the previous standard set in 2010. However, Approved Document F, covering ventilation, was last amended in 2010 and not updated in line with Part L so are the current regulations adequate for modern houses?

Overheating due to solar and internal heat gains has seen wide and often simplistic coverage in the press including even suggestions of deaths caused by overheating this has led some to erroneously put the blame on insulation. However, despite the fact that overheating can be a problem, particularly in loft spaces, it is a more complex issue than insulation alone, and well-installed insulation could even help reduce overheating if a whole-house approach to building design is employed.

The Green Deal, for all its flaws in terms of the delivery mechanism, was a valiant attempt to try and encourage homeowners to invest in much-needed energy efficiency improvements. However, it had many issues with implementation and sensationalist headlines in the media highlighting a supposed link between the Green Deal and overheating such as ‘OAPs could die in Green Deal Homes’ were very unhelpful. Again while airtightness does have a bearing on overheating, the causes of the problem are far more complex than simple measures taken to increase the efficiency of the building fabric.

In fact, building experts understand the dangers of a simplistic look at the issue which might suggest that higher levels of thermal efficiency as are implicit in new standards such as the Fabric Energy Efficiency Standard (FEES) or Passivhaus automatically lead to overheating. In reality a well insulated building can make it easier for occupants to maintain a comfortable temperature whatever the season, but only if that shell is well designed in the context of its site, and properly constructed to include an appropriate ventilation strategy. Insulation is important for keeping a building cool as well as keeping it warm. As an example overheating can also be seen in top floors and attics of older buildings without insulation where hot roofs radiate heat into a dwelling. While modern blocks of flats do not suffer from this, they can have poorly designed communal heating which proves to be the main cause of overheating.

There are potentially more problems in flats than houses; a study by the Good Homes Alliance of 1000 housing professionals early in 2014 found that most respondents had identified problems of overheating in either new build or converted flats. Increasing accommodation density by cramming a lot of small residences into one building can lead to design issues causing overheating which are hard to resolve once a building is constructed, including single aspect and lack of cross ventilation.

The fundamentals over whether a building will overheat in summer or when the sun is strong; are to do with key design factors including how many windows a house has, whether they are all openable and whether they are largely south facing. It is a given that a building with a single aspect facing south will be more susceptible to overheating than a triple-aspect building.

As well as several examples of poorly designed apartments, the study identified two housing projects one of which was suffering from overheating due to problems caused by heating systems for which the solution of passive ventilation was proposed. Another project had a large southern aspect, insufficient roof insulation and only the lower half of windows were openable, and as well as installing new windows, a solution proposed included adding external shading, glazing film and insulation to sloping ceilings.

If a design does not properly integrate thermal mass, i.e. the ability of the fabric to retain heat and emit it over time, with adequate ventilation it may contribute to overheating. In many homes the thermal mass properties of dense building materials are limited due to not being directly exposed to the interior, however heat absorbed can still be re-emitted during summer months causing uncomfortable temperatures. This is particularly the case if a building is a single aspect and lacks cross ventilation or several openable windows, and some form of solar shading will be required. Another solution is night purge ventilation to cool thermally heavy materials and therefore the building, and enable them to absorb heat as temperatures rise the following day.

Particularly in the case of south and west elevations, reflective and ‘smart’ glass and solar shading can make a dramatic contribution to reducing overheating, and a lack of it can be a major cause. However, if windows aren’t able to be opened because of issues of noise, pollution or security, then this can practically work against a designer’s intentions, so choice of site has to be paramount.

In its 2012 report Understanding Overheating, the NHBC Foundation admitted that passive solar design strategies which attempted to capture solar heat and reduce space heating load in winter could, once thermal standards increased, see increased overheating. However, it added that appropriate measures could be considered by designers to mitigate this on new builds, or retrofits were easy and practical to achieve. The NHBC highlighted design measures including recesses, overhangs and balconies integrated into elevations to provide shading, as well as the increased urgency of looking at such measures in urban sites with space constraints with urban development continuing at a fast pace.

“Designers should consider building orientation, glazing area and types of construction to avoid overheating. Design features and strategies such as purge ventilation and solar shading must also be explained to occupants to ensure that these are effective.”

These are straightforward building precepts which all good housing designers and developers should already be employing, but the issue has thrown them into the spotlight.

There are many issues beyond the fabric of the building to consider when it comes to tackling overheating in housing, including its ventilation strategy, orientation and initial choice of location. While the issue remains a challenge for the industry, the problems are not insurmountable and are down to simple building physics. If we want more thermally efficient building envelopes as well as comfortable buildings then we need to aim for a fabric first approach which includes insulation such as high-performance PIR, however, at the same time, we need to design and build in a way that takes into account the effect of both external and internal heat gains that can lead to overheating. 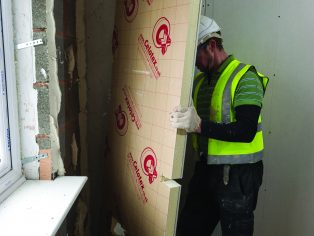