Lizzy and Rupert Atkins hadn’t intended to do a self-build, but when faced with moving out of the area they loved, they decided to embark on a major renovation project to transform an ‘ugly duckling’

Atkins had been living and working in New Zealand before they decided it was time to move back to the UK. Rupert was originally from North Devon and they were keen to live somewhere near the coast. In 2005 Rupert was offered a job in Plymouth, and so the couple relocated.

They rented for a year until a house came up for sale in an area they liked called Mannamead. Mannamead is known for its grand Victorian villas but Rupert and Lizzy wanted something more modern. In 2006 they bought a three-bed, 1930s semi-detached property. Their two sons were born there and the house became the family home for almost 10 years. The house was within walking distance of the boys’ school and the couple’s friends lived nearby.

Rupert and Lizzy love to entertain and the house was often full. Despite converting the roof into a fourth bedroom, it was downstairs where the family needed more space.

They were faced with a dilemma: “Round here if you want to move to a bigger property you only have two choices,” explains Rupert. “Either a huge, six bed Victorian house but with a small living area, or the 1930s style which we were already living in.”

Land didn’t come up for sale very often, and so when a large plot came on the market just around the corner from their home, Lizzy and Rupert went to take a look. The house was unusual in that it was a detached, 1980s self- build that had been designed by a local roofer. It was very spacious with four bedrooms, a drive and separate garage. The house itself needed a lot of work: “Inside it was a total disaster,” says Rupert. As well as having to install a new kitchen, bathrooms, electrics, and plumbing, there were lots of outdated features including a huge, 80s-style, inglenook chimney which extended up through the entire house. “We thought we would probably have to knock the whole thing down and start from scratch,” says Lizzy.

The house attracted a lot of interest from other homeowners in the area but most people, including Rupert and Lizzy, were put off by the amount of work that needed doing. The house was still on the market a year later – in 2014. The couple were having dinner with friends who had expressed an interest in the house, and drew up sketches of what it could look like. Rupert and Lizzy began to see its potential. As luck would have it, their friends bought a different property and were out of the running. Rupert got in touch with a friend at Bailey Partnership, a construction consultancy in Plymouth that specialises in larger, commercial properties. They sent a junior architect to look at the house. “Our project was relatively small fry for them, but I think they liked it,” says Lizzy.

When the couple saw the architects’ drawings, they were sold: “It was beautiful,” says Rupert. “The biggest risk was that we spent a lot of money but still ended up with an ugly house.” The architect had come up with a design featuring an extension to the left of the house, a new roof and more proportionally-sized bedrooms upstairs.

Rupert and Lizzy made an offer in January 2015 which was accepted, and surveys were carried out the following month. Things then went relatively smoothly; there was only one stipulation in the planning permission, which was that the building’s roofline couldn’t be raised. Two large trees at the front and back of the house were protected, however one of these, an oak, was so rotten that it was knocked down before the groundwork began.

Initially the couple struggled to find an enthusiastic builder – most were put off by the size and complexity of the job. Eventually it was Rupert’s hairdresser who suggested they contact a local builder, Paul Edwards, who had done a similar renovation project in the area.

Building work began in July 2015. The couple were busy at work and Lizzy was juggling exams at the same time. “Paul was fundamental to the project,” says Rupert.

“We had complete trust in him and his ideas, which meant we were able to make decisions as we went along rather than working to a fixed schedule.”

This rather organic process had both advantages and disadvantages. With no quantity surveyor the couple had to trust that Paul was keeping track of the costs: “On the plus side it meant that we had people on the ground who could make last minute changes at a better
price than if we had negotiated in advance,” says Rupert.

All of the original walls were knocked down along with the 1980s-style chimney, to create a large open plan kitchen, living area and entrance hall. A new slate roof was installed, which took around three months to complete.

Rupert admits he was alarmed when, almost halfway through the project – around Christmas 2015 – all the money he had budgeted had been spent. “I remember looking around this shell, thinking ‘Crikey we’ve still got a long way to go.’”

Upstairs the builders knocked through two of the four smaller bedrooms to create a master bedroom and ensuite. The extension on the left side of the house includes a large study/spare bedroom, utility room, shower room, larder and boot room.

The family were still living in their old house which was on the market; by the beginning of 2016 they had a buyer and moved in with friends for a few weeks until the electrics were fitted.

In April 2016 the family moved into what resembled a building site; “In hindsight it was far too soon,” says Lizzy, remembering the look of horror on the faces of the removal men. The first couple of weeks were tough, “That was the most stressful time for me, living there with two young children and working at the same time.”

It was a big job – teams of builders, carpenters and plumbers arrived every morning: “The weekly wage bill was obscene,” says Rupert.

With Rupert and Lizzy working long hours, their builder Paul’s constant enthusiasm and passion for the project was vital: “In the darkest moments he was always there keeping us calm.” He was such a big influence on the project that many of the features in the house are a result of his vision. “A lot of people have a clear idea of what they want, but we get enthused by others, so it suited us,” says Rupert.

The couple had a rough idea of how the inside of the house should look; a large open kitchen diner, a central wood burner, bi-fold doors opening on to a patio, a downstairs toilet, utility room, and larder, were all essential.

The family’s previous home had lacked warmth and so internal insulation was another important factor in the renovation. Each wall is internally padded with 50 ml of Celotex while a central wood burner provides most of the heating and circuits controlling other areas of the house.

The couple also spent time installing an efficient plumbing system that avoids wasted water – the boiler is set up to have a solar panel on it which they are considering for the future. Other energy efficient features include a gas tumble dryer, which saves on electricity.

Through the interiors Lizzy was able to make her stamp on the house. Her love of bright colours has been incorporated into every room, including a bright green floor in the kitchen, which she says is “something I’ve always wanted” – and blinds instead of curtains create a light and airy feel.

A large chunk of the couple’s budget went on aluminium framed windows and doors, which were sourced from a local, family run company called Green Circle. “You get so involved that making decisions, even about small things, becomes incredibly hard – you can have a beautiful version of something or a cheap one – it’s hard to work out where to compromise,” says Lizzy.

The downstairs living area is the real showstopper – configured around a central, double-sided wood fire, separating the kitchen, dining area and main lounge. There is a large breakfast bar for Rupert’s coffee machine which turns into a cocktail making area in the evening when the family have friends round. “It’s a great party house – if we ever had the time!”

The kitchen was made in Exeter by Intoto, and features a seven-metre long white marble worktop, which was made by a friend. A Kartell Bookworm bookshelf by Ron Arad features on the main wall in the living area.

Parts of the house have been designed for the couple’s two sons; there is a mini snooker table, a football table in the entrance hall and table tennis in the garage. The large study-cum-spare bedroom converts to a snug and play room. There is also a boot room for the countless pairs of football boots. There are four bathrooms, including a downstairs shower room, two ensuites, and one main bathroom. “It’s a fabulous house to live in and brings us a lot of joy. We are pretty lucky,” says Rupert.

From the front, the house is incredibly striking and stands out against the surrounding Victorian terraces. The neighbours were behind the project from the get-go: “We did cause some waves,” says Rupert. “But ultimately we took an ugly property and made a beautiful property which is something people supported.”

He adds: “We still get people standing at the bottom of the drive staring up at it.”

Four years on and the couple are now ready to start work on the second stage of the renovation. The large terraced area at the front of the house is mostly driveway space with a garage. At the back of the house is a smaller, L-shaped lawn with a summer house. The couple plan to renovate this into an airbnb, or a place for the boys to live when they get older, and are hoping that Paul will take on the project later this year. “If we can finish the garden, I don’t know where else I would want to live,” says Lizzy. 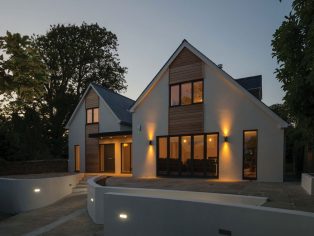 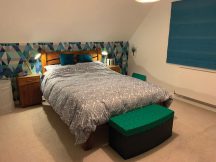 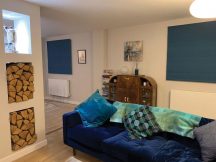 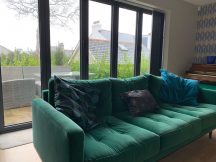