The case for third party certification

Helen Hewitt of the British Woodworking Federation (BWF) explores the intricacies of third-party fire door certification and its benefits.

The purpose of a fire door in everyday use is just like any other door. However, since the break-out of fire is never predictable, a fire door, unlike any other door, must perform to its prime purpose: to delay the spread of fire and smoke, protecting lives and property.

Since the Grenfell Tower tragedy, the ability of fire doors to perform has been at the top of the construction industry’s agenda – but at the time of writing this, the results of the Ministry of Housing, Communities and Local Government (MHCLG) investigation into fire door burn times are yet to be published. The BWF’s Fire Door Alliance believes that only third- party certification of fire doors and doorsets can provide true confidence in fire safety.

The performance of a fire door assembly, commonly referred to as a fire door, depends on a number of factors including design, manufacture, installation and ongoing maintenance.

A fire door assembly is a system of components which not only includes the door, but also the frame, ironmongery, seals, and its glazing. These components must all work as one unit and perform as they’re designed, otherwise the door may not be fit for purpose.

A fire door’s effectiveness is determined by its ability to resist fire and cold smoke. The two main classifications are FD30 and FD60, which means a door can provide resistance to fire for 30 minutes and 60 minutes respectively according to British Standards. Similarly, a door that can also resist the passage of smoke is referred to as FD30S for 30 minutes, and for 60 minutes FD60S. It’s important to note that smoke control is not classified for a particular period of time.

Fire doors that are manufactured in isolation without independent scrutiny are unlikely to be subject to a retest programme when the design is changed, or there is a change in the supply chain for raw materials and/or components. This is why third-party certification is so important, as it ensures that there is a robust and ongoing testing programme.

The certification process relies on three stages: passing the British Standard tests, a strict production control systems audit and, crucially, repeated and regular retesting. This provides specifiers and building owners with reassurance and confidence that the fire door will achieve the performance criteria that its accompanying documentation outlines.

Supporters of the Fire Door Safety Week campaign, since its inception seven years ago, will know that the BWF Fire Door Alliance has long called for improvements to fire door safety and the mandatory requirement for third-party certificated fire doors. The process of independent third-party testing will only grow in importance following the current investigation into fire doors by MHCLG.

While certified components are essential, the performance of a fire door is also dependent on the quality of its installation and its ongoing maintenance once in situ. The installation should be completed by a competent installer in exact accordance with the specification and third-party certification scope as detailed on the manufacturer’s instructions.

It’s important that this documentation is retained and adhered to throughout the fire door’s service life, because unless there is clear evidence that the components are compatible, the building owner may not be able to demonstrate compliance under the Building Regulations or the Regulatory Reform (Fire Safety) Order (RRO).

Raising awareness of the correct specification, installation and maintenance of fire doors has never been more important in the wake of the Grenfell Tower atrocity and the MHCLG investigation. Although awareness of fire safety has certainly grown since Grenfell, there is still a long way to go, and this precisely why industry-led campaigns such as the Fire Door Safety Week – organised by the British Woodworking Federation – are so vitally important.

The BWF is currently planning for the eighth Fire Door Safety Week campaign to help increase understanding of the vital role that fire doors play in protecting both lives and properties. Taking place from 23-29 September, the campaign will highlight bad practices while providing technical support and guidance to the construction industry, as well as raising awareness of the importance of fire doors.

By selecting a door that is third-party certificated, correctly installed and supported by an ongoing maintenance programme, building owners and occupants can be confident that in the unfortunate event of a fire, their fire door will prevent the spread of fire and smoke, and save lives.

Helen Hewitt is CEO of the British Woodworking Federation (BWF) 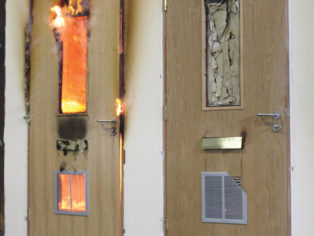