Tata Steel has supplied its leading steel standing seam wall cladding system, Urban Seam® Facade to a new award-winning development in Portsmouth. The Goldsmith Avenue project is among the first in the UK to benefit from the A1 fire rating of the system, as well as its modern aesthetic and long-term durability.

The Goldsmith Avenue development, which won Regeneration Project of the Year at the South Coast Property Awards 2019, provides a total of 70 high quality flats, with 56 for affordable rent and 14 for shared ownership. The two, six-storey buildings, built by PMC Construction for VIVID, provide a much-needed mix of 1-, 2- and 3-bedroom flats, with two designed specifically for wheelchair users.

The exterior of the two buildings features a mix of red brick alongside Tata Steel’s Urban Seam® Facade in Merlin Grey, which was selected for its aesthetics, increased fire performance and longevity.

“We were looking to create a pair of buildings that offered something architecturally different but still reflected the local area. We looked at a range of options, but the standing seam was the one that best suited the surroundings of former industrial and railway buildings. The grey steel cladding provides an excellent contrast with the classic red brick and creates the sharp lines that give the buildings their character.”

The Goldsmith Avenue development was in the planning and design phases during late 2017 and therefore the design and specification of the facade was influenced by the increased focus on fire safety that followed the Grenfell tower fire.

“The importance of maximising safety has been underlined in the most horrifying way and with regulations likely to change, we adapted the specification to ensure it surpassed current standards. Following a discussion with the team at Tata Steel, they devised a solution that would satisfy the client by minimising the use of combustible materials in the cladding systems.”

The Urban Seam® Facade system consists of a high-quality steel standing seam mounted on a profiled steel deck. This steel deck replaces the continuous plywood or OSB backing board usually used in fully supported standing seam cladding. This means the new system has an improved reaction to fire rating of A1 and provides an ideal solution for use on residential apartment blocks such as the Goldsmith Avenue development. Tata Steel’s technical team also provided installation guidance and assistance in designing site-specific details such as those around the window and door openings.

“A standing seam system that features a metal deck was already in development. When we learnt what was required for this project, it became obvious that the new system would be ideally suited. Because of how new this installation method was it required close collaboration from everyone involved but it has been a real success and is now being used on a range of new projects.”

Durability and the proximity to the coast were also factors in the selection of materials. Located on Portsea island and just over one mile from the Solent, the buildings’ facades had to be resistant to harsh weather and the coastal environment. Urban Seam® Facade is manufactured from high-quality Colorcoat Prisma® pre-finished steel and features a Galvalloy® metallic coating for exceptional corrosion resistance. Furthermore, the complete Urban Seam® Facade system has been independently tested to Centre for Window & Cladding Technology (CWCT) standards. The large-scale test assessed the system’s performance in relation to wind resistance, impact resistance and water tightness, including dynamic pressure tests.

“We are delighted with the quality of the build at Goldsmith Avenue.”

Director of New Business and Development at VIVID.

“The look and feel of the external fabric is key to the building’s success. It has made a significant improvement to the street scene and will act as an excellent catalyst for future regeneration.”

To find out more about Urban Seam® Facade visit www.tatasteelconstruction.com. 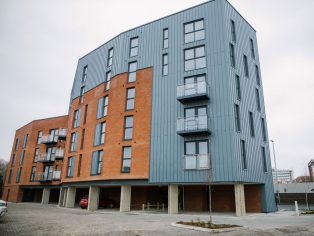