Damp and mould is a common problem in many rented homes and flats across the UK. Poor ventilation, lack of insulation, cracked render, rising damp and leaks are some of the main causes and often it’s simple to find the route cause, but it’s the treatment and who the responsibility lies with to get it fixed which can leave landlords stumped.

Given that damp and mould can trigger respiratory problems like asthma and lung infections, its important that reports of this kind are tackled quickly and efficiently to avoid reoccurring issues. Broadly speaking, landlords are responsible for providing a safe, comfortable environment for their tenants to live in. If it’s obvious where the source of the problem lies (for example, cracked render or a leak) it is up to the landlord to fix it, but when there is no obvious cause, things get a little more complicated. In this case, tenants are responsible for looking after the property they’re living in, which includes heating and ventilating the rooms to regulate air flow and release excess moisture. If these steps haven’t been taken and condensation is left to build up on walls, it can be a little more subjective as to who is responsible for fixing the problem.

Particularly in areas which are moisture prone like bathrooms and kitchens, windows should be left open for 5-10 minutes whenever possible and it’s important to use the central heating to keep the property warm, as this means less cold surfaces which draw moisture in. It’s recommended that homes are heated to at least 15°C.

If tenants have been taking prevention measures and conditions are not improving, it then falls to the landlord to provide a solution. Fixing the problem will avoid unhappy tenants, legal implications and will demonstrate that you are a responsible landlord.

Firstly, you should look to fix any issues with heating and ventilation. Make sure extraction fans are working in the kitchen and bathroom, and ensure all rooms have a working radiator.

In most cases, you’ll also need to treat the affected walls and make it as difficult as possible for moisture to gather. A sprayed cork coating can do exactly that, providing a thin but powerful layer that is completely moisture resistant. Corksol’s sprayed cork treatment has worked wonders for countless landlords and housing authorities, eliminating damp, improving insulation and providing a comfortable living environment. This solution was used to great effect when a flat in Shearsmith House, South London suffered from a major damp problem.

A 26-storey, 107-flat tower block, Shearsmith House is a solid concrete superstructure with a partial brick skin, a build which is particularly prone to problems of this kind. The block has suffered from a worrying level of damp, mould and condensation and least 80% of residents were believed to have been struggling with mould and condensation at one point.

There are several factors which may have contributed to the damp problems increasing over the years, including poorly conceived plastic double glazed windows and unreliable fans in the four central building extract ducts.

One of the worst affected flats was used as a trial, before deciding whether to roll the project out to the rest of the block.

First off, new fans were installed in all the kitchen and bathroom and the central ventilation system was cleaned out and the air duct valve was replaced. Trickle vents were added to all windows as a means of regulating condensation. Following these steps, an air movement survey confirmed that ventilation should have been more than adequate, but the damp was present and the extent of the black mould continued to increase.

Next on the agenda was to look for suitable thermal wall treatments to increase the temperature of the internal walls. There is the risk of increased air bridges with traditional internal wall insulation at the seams and fixing points, but with SprayCork from Corksol, the product is spray applied in one seamless layer.

A SprayCork base with a plaster overskim seemed to have the potential to resolve the reoccurring damp issue. At only 8mm thick in total, this solution was considerably more space-effective than 100mm internal wall insulation. Once the surface has set, the material is highly porous, meaning that any residual dampness in the walls can transpire away harmlessly over time, allowing the building to ‘breathe’.

Corksol’s local approved applicator in East London, Pete Lydon of The Good Plastering Company carried out the work. First, clean down the mouldy walls with a specialist bleach wash. Second, spray apply two coats of fine granule Corksol, each coat 3mm deep, ensuring an even and continuous coverage. Finally, the wall was given a standard 2mm skim of plaster.

In the 12 months since the project was completed, the tenant is very happy with the outcome and the regular complaints are long gone. The flat has remained clear of damp, condensation and mould; internal temperature is warmer and more stable; heating bills have reduced by around 15% and the overall comfort of the flat has significantly improved.

Now with the upmost confidence in SprayCork, East End Homes are planning to fit the same system in many of the other flats in Shearsmith House.

To find out more about Corksol and its sustainable coatings, please visit www.corksoluk.com 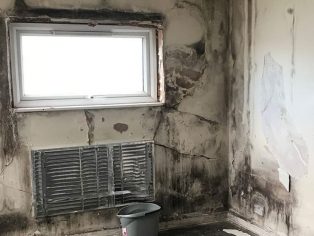 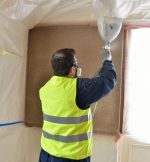