The StoSilent Distance acoustic ceiling and wall system from Sto was specified for the world’s leading museum of art, design and performance and it now creates the perfect acoustic environment for a high-profile display of Renaissance art treasures. The V&A in London recently completed a landmark refurbishment of its Raphael Court where the StoSilent Distance system is now installed.

“This was a very detailed and complex project to create a new acoustic environment which suited the function of the gallery. Effective acoustic attenuation in the large gallery space was an essential requirement for future visitors to enjoy the artworks on display. The solution was to install a bespoke framework system which would hold 42 curved StoSilent Distance acoustic attenuation panels, each one over 5m in length.”

When it came to specifying the acoustic system, project architects Feilden Clegg Bradley Studios were looking for a solution which was lightweight, as they would be adding extra weight to the existing building. It also had to be able to accommodate the different angles and curves of the vaulted ceiling.

“The StoSilent Distance system had recently been used on a successful project at V&A Dundee, so that set a positive precedent. Sto worked very closely with us to identify the most effective solution from an acoustic point of view. They also provided large-scale samples which we could view on site to test the colour and finish alongside other materials used in the gallery.”

“Improving the gallery acoustics was a complex and challenging project. The priceless artworks measure some 5m x 3.5m, so rather than move them, the decision was made to construct protective shields around them. That allowed them to remain in place during the installation work, but added an extra dimension to the project. The solution had to be adapted as the work progressed and new considerations arose, but the Sto system was sufficiently flexible to accommodate all the necessary changes.”

The StoSilent Distance system provides outstanding acoustic attenuation, and is ideal for use in large public spaces such as this. Flexibility is a key characteristic as the system allows the creation of large, sound-absorbent and seamless surfaces on walls and ceilings, but it can also be used to achieve sharp and consistent joints where required. It provides very high levels of crack resistance, ensuring that the finished surfaces will retain their attractive appearance – an especially important consideration on a prestigious project such as this.

The StoSilent Distance acoustic boards were finished with StoSilent Décor M. This spray-applied surface coating created a classic fine-stippled finish which perfectly matched the aesthetic of the gallery. It is easy to refurbish, environmentally friendly, inert and natureplus® approved, and can also be tinted to match a wide range of shades from the StoColor system.

The Raphael Court is one of the V&A’s largest and most dramatic galleries and is home to the Raphael Cartoons, which are among the greatest treasures of the Renaissance in the UK, lent to the V&A from the Royal Collection by Her Majesty The Queen. Shortly after his election in 1513, Pope Leo X commissioned Raphael to create a set of ten full-scale designs for a series of tapestries for the Sistine Chapel in the Vatican Palace, illustrating scenes from the lives of Saint Peter and Saint Paul. Once complete, the Cartoons were sent to a workshop in Brussels, which transformed the monumental designs into tapestries. Seven of the Cartoons survive to this day. The official opening of the refurbished gallery was scheduled to coincide with the 500th anniversary of Raphael’s death. 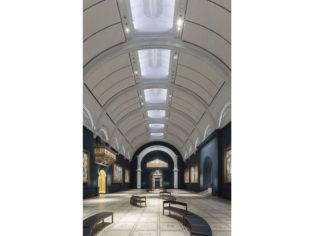 View of refurbished Raphael Court at the V&A, 2021 © Victoria and Albert Museum, London