Never has public opinion been more interested in how we dispose of the things we produce – from a ban on plastic straws to the feeling of remorse when buying a disposable carrier bag at the local supermarket. The spotlight has been shined on many industries and it will not be long before this mindset positively infiltrates the built environment. Once an agenda pushed only by the most vehement of eco-warriors, we have now realised that our short-sighted attitude to the built environment is no longer congruent with our civil obligation as designers to reduce our industry’s impact on the environment.

As the world becomes more urbanised and the pace of development accelerates, questions need to be raised about how we use the finite resources we have available, not just to package our food, but also to build our houses. The ability to efficiently deconstruct a building back to its component parts is of central importance to material reuse. Whilst the growing market of mass-produced modular construction reduces the bespoke nature of the built environment, it arguably serves only to reduce the cost of construction and does little to truly improve sustainability and promote material reuse.

The values that underpin design for reuse are complemented by the application of natural, or more precisely biogenic materials. Both seek to minimise the negative impact our industry has on the environment and, when interwoven, they can often create more exciting and tactile dwellings. The Cork House, secluded by the Thames in Berkshire, was an idea born out of a desire to simplify modern construction methods – to remove the barriers to deconstruction and to push the boundaries of what can be achieved with plant-based materials. The research began in 2014 by architects Matthew Barnett Howland, Dido Milne and Oliver Wilton and after an initial exploratory phase, they found potential in expanded cork. Primarily marketed as a natural alternative to petroleum-based insulation materials, expanded cork showed promise in performing the role of structure, insulation, weather barrier and finishes.

Further detailed research part funded by Innovate UK and EPSRC grants was undertaken by MPH Architects, The Bartlett, University of Bath, Amorim UK and Ty-Mawr, with subcontractors BRE and our team at Arup. Expanded cork is made from a by-product of the wine stopper industry and cork oak forestry, normally sent to waste, formed by heating and compressing cork granules within an autoclave to create a block that is amalgamated and bound by its own natural resins. The blocks can then be CNC machined offsite to produce a kit of building blocks that form a dry-jointed interlocking construction system. Weighing less than 13 kg each and installed with little more than a rubber mallet to an ‘interference fit’, the assembly process has more similarities to Lego than modern house construction.

Cork House contains 1268 cork blocks assembled upon a cross-laminated timber (CLT) floorplate and founded on removable screw piles. The roof is formed from five corbelling truncated pyramids supported on timber edge members and valley lintels to span window and door openings and allow an open plan interior. Meticulous detailing of block interfaces by Matthew, Dido and Oliver, developed through experimentation on smaller test buildings and rigorously tested by BRE culminated in the weather-tight yet completely dry form of construction used on Cork House.

While traditional methods of dry jointed roof construction have existed for millennia, often designed through trial and error and utilising the high self-weight compression for stability, the low density of the material led to interesting challenges for Arup such as relying on the ballast of the rooflights to prevent uplift under high winds. Utilising the same material for both structure and insulation was also not without its challenges.

Rather predictably, the denser the blocks, the stiffer they became – however, equally predictably, the thermal insulation performance suffered. It was therefore always going to be a careful balance between the different performance requirements demanded of the material. We also had to think about the creep behaviour under sustained loading, a long-term affect that cannot be easily replicated in short-term lab experiments.

We applied our knowledge gained from other plant-based materials such as timber and bamboo to best predict the future compression of this inherently soft material. There are many ways to present the sustainability credentials of a building. The Cork House was carbon-negative at completion – not a bad starting point. In numerical terms, the building is predicted to emit only 619 kg of carbon dioxide equivalent per square meter over its lifetime.

An impressive figure, which will be evaluated though, a post-occupancy study. However, taking a step back, it is clear that a dwelling formed almost exclusively from a waste biogenic material that can be effortlessly deconstructed to its constituent parts and repurposed, must have a minimal footprint on the environment. The purpose of Cork House was more than achieving metrics and credentials.

It’s a perfect example of how structural testing and experimentation with new materials can help inform the environmental debate. It is not trying to provide the definitive solution for every project. Rather, it serves to inspire the innovators of our industry, and allay the naysayers, at a time when society is demanding that we all play our part in finding answers to climate change.

Gavin Maloney is a structural engineer at Arup 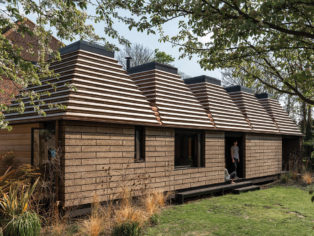 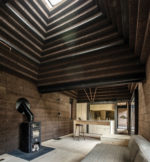