Secure in the knowledge

Specifying fencing for safety and security purposes requires careful consideration of key components that will ultimately determine whether the chosen solution will stand the test of time, and serve the purpose it was designed for.

The type of fence that should be specified depends on the application. For perimeter security, look for steel fencing that has been designed to British Standards and is galvanised or zinc alloy coated for long- lasting protection. The main types of perimeter security fencing are welded mesh panels and vertical bar railings, and there are many variations of each. Both can offer good visibility and do not impede surveillance, are aesthetically pleasing, and offer excellent security against climbing and attempted breaches.

For welded mesh panels, wire thickness is a key indicator of quality and compliance with the various British Standards. Welded mesh fence panels are almost always sold with a protective coating covering the wire. Some manufacturers measure their wire diameters after the coating is applied. A smaller diameter wire with a heavier layer of coating will not provide the same structural strength and resistance to cutting as a product made from heavier diameter wire, even though both will be shown as being the same diameter.

When choosing vertical bar railings, look for fencing with welded pale-through-rail construction (the pale being the upright itself). Pales that are affixed on the front of rails can be easily removed to create a gap in the perimeter, while pales which are inserted through rails and welded have no visible fixings, and create an extremely secure fence.

For areas where children are present, such as play areas, the safety of the fencing is just as important as the play equipment within. Look for RoSPA-approved designs, and fencing designed to BS EN 1176 with anti-trap properties. Fencing that can’t be easily vandalised is essential to avoid creating an unsafe scenario of broken fencing and hazardous nails sticking out.

Where noise reduction is required in addition to security, look for tested acoustic barriers with an anti-climb flat profile, no gaps that would allow sound to escape or which would provide a foothold, and a solid construction to increase privacy. There are also LPS 1175 rated versions available; these are an ideal choice for data centres.

The height of the fencing specified will depend on the type of property it is securing. School perimeters should ideally have fences of between 1.8 metres and 2.4 metres, while high security sites such as data centres and utilities generally require fencing of at least 3 metres, and prisons may have at least 5 metre high fencing. Playgrounds will require much shorter fences at a minimum height of 1 metre to allow for independent play, without creating an intimidating environment.

With any type of fencing, the most vulnerable areas are the fixings and panel connectors. Screws, bolts and rivets should be tamper-proof to prevent them from coming loose and compromising security, or being removed manually to gain access. Similarly, panel-to-post connectors should be concealed to ensure that whole panels cannot be removed from the posts. All fixings should be galvanised or stainless steel for added protection against corrosion.

With all of us trying to make more responsible, sustainable choices, it’s important to choose fencing that has a traceable supply chain, and offers a long guarantee. A 25 year guarantee demonstrates the manufacturer’s confidence in its products, and their dedication to providing reliable, long-lasting products that reduce their carbon footprint.

Where visible deterrents are necessary, or where there is a risk of climbing – e.g. buildings, trees, or lamp posts could be used to gain purchase – security toppings can be added to the fence. Barbed wire is a cost- efficient option with a suitably menacing appearance, while rotating spikes ensure that even the most prepared would find it impossible to gain access by climbing.

Warning signs must be visible where fence toppings are in place, and these act as an additional deterrent by themselves.

Gates should always be considered at the same time as fencing, and should match the type of fencing to guarantee consistency of security, as well as providing a polished appearance. There are many types of gates available, from swing gates, to tracked or cantilever sliding gates, or bi-folding gates that offer rapid access. Access control devices should be chosen to suit the type of gate and security level of the site, such as card readers, key fobs, digital pads, and key locks. To increase safety, separate gates should be installed for vehicles and pedestrians. This will also increase security – having smaller entrances for pedestrians reduces the need to open vehicular gates to allow them access, and avoids leaving large gaps in the perimeter. When specifying automated gates, it is essential that they are CE marked, and all Door Hardware Federation safety standards and guidelines should be strictly applied to ensure full safety compliance. 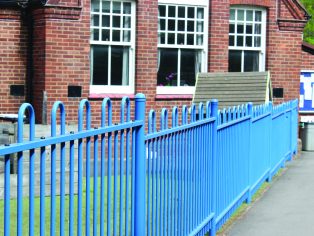