“Repetition and recollection are the same movement, only in opposite directions; for what is recollected, has been, is repeated backwards, while repetition proper is recollection in a forward direction.”
Søren Kierkegaard (Danish philosopher, 1813-1855 A.D.)

It is said that we are creatures of habit. We struggle when things change because it makes us feel vulnerable and insecure. The familiarity and clarity provided by rituals and repetitions offer a sense of stability.

Depending on the individual concerned and the amount of repetition, its importance varies: some people become bored quickly; others prefer suspense and expectation to build up slowly and gradually. One person thinks the world spins far too quickly, another feels it is too slow. Few people would choose to wake up to a different life every day, bereft of any past experience. And few would want to experience exactly the same thing every day. So, the optimal amount of repetition is bounded by a very tight temporal and spatial corset. According to Kierkegaard, as repetition always has a direction, it is therefore in motion and always influenced by the individual.

This is such a reassuring notion. It means everyone is free to funnel memory, thinking and actions into repetition and, based on learning, to influence the world for the better. This applies to the future and maybe also to the past, because memories can be revisited and amended. The length of time and the number of repetitions are crucial in this process. Over millions of years, tiny organisms have developed into diverse forms of life on earth, just by repetition and optimization.

Repetition opens up a massive scope for activity and requires an equally powerful creative drive. Our architects illustrate this creativity on the following pages. Incidentally, their work is based on terrestrial elements which, as it were, have evolved into the ALUCOBOND® naturAL series. 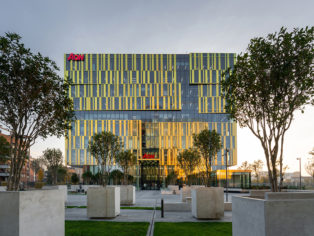