When Sally and John Medforth bought a hillside farm in Yorkshire it came with a series of dilapidated 18th century outbuildings.

The whole lot needed renovating, but first they wanted to update the farmhouse so the family could move in there before renovating the rest of the buildings at leisure.

“We had renovated before so we knew what to expect,” says Sally, who runs a holiday letting and property development business. “It was always going to be a challenge but you accept the fact that you will be living on a building site for as long as it takes.”

Once the farmhouse was completed Sally and John took their time to work out what they wanted to achieve with the rest of the site – particularly an 18th century pig shed which had loads of natural character.

Before they could do anything, however, they had to get planning permission to change the use of the building from agricultural to domestic.

“There were a lot of restrictions all based around the fact that we had to keep the character of the original building in tact,” says Sally. “We also wanted to do most of the work ourselves. We had a fairly tight budget and we knew we could save a small fortune by minimising the amount of trades people we used.”

They began by knocking out the ceiling to open up the pitch roof, using a mini digger and wheelbarrows to get rid of 120 tons of earth and rubble.

The stone walls were all sandblasted by a contractor using specialist machinery to get them clean, both inside and out, and then Sally spent weeks climbing up and down ladders, wire brushing the walls and oiling them to prevent any remnant dust from shedding into the rooms.

By the time everything was cleared inside they were left with three stone walls defining the internal space, which they wanted to turn into a three bedroom home. The long building leant itself to a simple linear room layout, with bedrooms at either end and the main open plan living space in the middle.

To achieve the three bedrooms and two bathrooms they wanted, Sally and John agreed to create an upper floor at one end of the building to house a main en suite bedroom.

They brought in builder Graham Smith to build the extra internal stud walls, and then lower the floor at one end of the building to create space for a two-storey section.

At the same time the roof height was raised in this part of the building to create enough head room for a utility and staircase on the ground floor, leading to a third bedroom and en suite above.

The building was also re-roofed to replace rotting timbers and cracked tiles, and then fully insulated.

“We took guidance from a number of Building Regs officers during the renovation,” says Sally. “We particularly needed their advice on the roof joists and insulation, because they wanted us to have four inches of Kingspan. If we were to keep the necessary gap we could only fit three inches of insulation, supplemented by a very thin additional thermal layer, to meet Regulations.”

They also discovered, after skimming all the internal walls, that they would have to knock out some of the newly skimmed plaster to accommodate lights over every door – a requirement if they were to eventually let the property as a holiday destination.

They also had to compensate for a window that was positioned too high off the ground for a fire escape by fitting an escape ladder – which they turned into a feature using disused fencing.

When it came to this kind of detail Sally was determined to keep the budget in check by using reclaimed timbers, furniture and finishes to create a natural, rustic look, including rejected scaffold boards for cupboards, fence posts for window headers and banister rails, and tiles discovered on the farm for the fireplace.

“Our builder was brilliant at finding things most people would throw away and creating something new from them,” says Sally. Even the bathroom fittings were ex showroom display and a basin found on an old workbench was scrubbed up to look like new.

“We had to buy new wide floorboards for the ground floor so I spent hours hammering them, gouging bits out with a screwdriver and using a small kitchen blow torch to make them look old and worn,” says Sally. “Then I waxed them three times, by hand. It was a tedious job but well worth it – it looks fantastic.”

Stone flags taken from another outbuilding that was demolished were re-used to add to the lived in, industrial/agricultural style of the interior.

Sally spent hours hunting around to find things that other people were throwing away and scoured the internet for bargains to create a luxurious bathroom, which became her favourite room in the property.

Throughout the converted pig shed, Sally and John have created feature walls to reflect the history of the building by leaving original stone exposed. “The natural stone is much more attractive than plaster, but it would have looked too much if we had left it everywhere,” says Sally.

The remaining walls and ceiling were skimmed with fresh plaster and then joiner Jason High fitted doors and skirting boards.

“I wanted to keep the character of the building, with its deep set windows and lovely beams, but I also wanted it to look quite modern,” Sally says. “There’s not a lot of natural light in here so I wanted to keep the decor as light as possible and to complement the warm tones of the exposed stone.”

Sally spent hours on the internet looking for bargains. She wanted the floors to be practical, hard wearing and easy to clean, so she used up left over tiles given to her by family, which she pressure washed to make them look like new. She also salvaged anything she could from the farm – building materials which were just lying around waiting to be reinvented.

“I didn’t buy anything that wasn’t a bargain,” she says. “I kept an open mind and bought things in sales, through eBay, and by asking around to see if anyone was throwing anything out that could come in useful. It’s amazing what people throw away.”

Sally asked the joiner to fit scaffold boards on the walls in one of the bathrooms to define the bath area and also create the sink stand – which is a reclaimed table found in a farm outbuilding. A wooden ‘splashback’ door was screwed securely to the stone wall and the copper taps, which were bought on eBay, were fixed to pipes fed through the door.

“You have to think outside the box to save yourself lots of money,’ says Sally. Sometimes it’s a case of finding something and wondering how you can use it. It’s amazing what people throw away. We also relied on help from friends and family to keep costs to a minimum,” says Sally.

“I wanted to make is as homely as possible but keep it practical at the same time,” she adds. “Carpets are not much use when you live in the country, especially when, like us, you have family in and out all the time and dogs roaming around with muddy paws. The stone floors are ideal and the whole house can withstand a lot of wear and tear. That’s the great thing about using reclaimed materials – they continue to look better with age.”

Sally has added the finishing touches gradually, layering up with soft furnishings and adding items of vintage kitchenware on the open shelves which are practical and stylish.

“It’s a really cosy place,” says Sally. “It stands on a hilltop so when the autumn winds are blowing across the hills and whipping round the house, we just close the door, baton down the hatches and we are as warm as toast.” 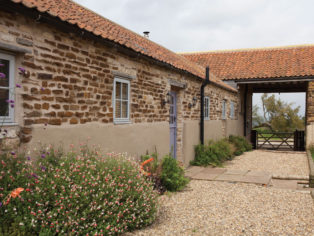