The last thing students off to university will be thinking of is fire safety. Shared accommodation such as university halls of residence and privately-owned student accommodation is however considered vulnerable and much more likely to see a fire occurring, mainly due to unattended cooking, cigarettes or candles.

Or course halls of residence these days tend to be designed and built to a high standard and must comply with the latest Building Regulations, in addition to having all the relevant fire precautions including:

The greatest fire risk generally arises from unattended cooking. An unattended pan on a stove is an accident waiting to happen, and it can happen very quickly. Ironically, if not accompanied by correct training, the provision of fire extinguishers can make matters worse. A fast jet of water aimed into a pan fire is likely to spread the fat and the flames very quickly onto surrounding surfaces, or even people.

A hob needs watching carefully, especially when preparing anything with fats and should never be left unattended when switched on – but with students’ habit of late-night cooking, this is easier said than done!

Full blown fires in student accommodation are quite rare – the more usual event is smoke from a toaster or perhaps food burning while cooking. In many circumstances this would only cause, at worst, a small localised fire that could be dealt with by the student opening windows and wafting a tea towel around. However, it’s inevitable that some kitchen doors will be left open while cooking.

While kitchen doors will most certainly have automatic door closers and intumescent strips edging the door, students could wedge the door open to be sociable and for their convenience. Doing this allows the smoke generated to escape into common areas such as corridors where the smoke detectors are sited. This can at best be an annoyance to other students in the block and at worst, trigger the main smoke alarm, potentially causing evacuation.

If a fire alarm has been triggered, automatically calling the fire brigade, there will also be further cost implications such as call out charges. Whether the cost should fall on the university, the students or the public purse is an ongoing debate. However, the risk of fires occurring and students being injured far outweighs the potential inconvenience of false alarms.

It is not just the safety of the students at stake but also the cost of refurbishment, loss of valuable books, computers and lecture notes.

Technology can come to the rescue here. Rather than relying on the student to switch the hob off or repeated checks ensuring that kitchen doors aren’t wedged open, there are devices that can do the job automatically. For example, count down timers can switch the hob off after a predetermined period of time, and kitchen door alarms can be installed that once triggered will only silence by closing the door.

Although practical, these technologically advance solutions are available, they are not immune to the efforts of students seeking to tamper with them. The universities take a dim view of students who tamper with this type of equipment.

It is important that measures such as protective cages and anti-tamper fixings are used to prevent students from seeking to compromise the alarm, either deliberately, or perhaps in ignorance of its potential lifesaving function. Technically speaking, these are preventable alarms rather than false alarms, but are still part of the debate.

Fire alarms are for the many not the few, and it’s important to take measures to prevent a fire starting in the first place. 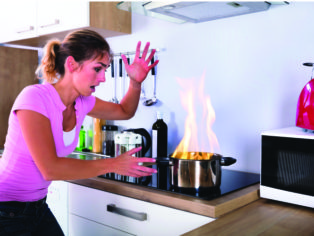