Joe Haire, co-founder and director of White Red Architects tells Roseanne Field how the ambitious practice has built on a foundation of a friendship between two undergraduates to place collaboration at the heart of its work

Becoming friends while attending Manchester School of Architecture, Joe Haire and Dicky Lewis had always talked about starting their own practice together. “We were competitive, but worked well together,” Haire says. “It would be accurate to say the practice was originally started out of friendship.”

Despite graduating and finding jobs at other practices (Hawkins\Brown and AHMM in Haire’s case, and Foster + Partners in Lewis’), the idea of co-founding a practice endured.

In 2014, they began working together as White Red Architects (WRA), but only in their spare time. For the first year they worked evenings and weekends on “a handful of projects – largely domestic extensions,” explains Haire. “We built and tested systems, and started to learn about business development and running a company.”

The name came from a competition entry Haire and Lewis were working on late one night. “We were frantically sketching with a box of red pens Dicky had borrowed from Fosters’ office,” Haire explains (stressing that they were later returned!). “The entry needed a team name and we saw the answer in the white and red drawings that surrounded us.” They liked its “simplicity and boldness,” he continues.

To avoid it being a barrier to their goal of collaboration, they were reluctant to use their own names for the firm’s moniker. This decision was quickly vindicated as they met soon-to-be fellow director Jesus Jimenez shortly afterwards.

Once they had saved enough money, Lewis handed in his notice and started working full time at WRA, closely followed by Jimenez and Haire. Initially, he says, their primary goal was to “build a platform that would give us the freedom to test and develop our ideas,” including designing in new sectors. He continues: “We liked the idea that the practice could be a vehicle for working with different people to do the work we wanted to do.” A period of tireless networking and cold calling followed, to build up not only a client list, but also market knowledge. “Having started relatively early in our careers we were not bringing established lists of clients with us,” says Haire.

Expanding
Since the practice’s inception, it’s grown to a team of 12 working in their Shoreditch office – including Haire, Lewis, and Jimenez – and four in an office in Mumbai, run by director Bhushan Kapase.

“We wanted to build a studio capable of undertaking international work from the start, and we were interested in the contrast in culture and climate that India offered,” Haire explains. Dicky and Jesus had met Bhusan when working on projects for Fosters together in Mumbai and had stayed in touch. “It didn’t take long to decide to work together,” the architect adds.

Sharing the workload across the two distant studios, the teams rely on Zoom, virtual reality (VR) and 3D printing “to make the dialogue as effective as possible!”.

Despite being a relatively small practice in terms of employee numbers, the studios take on high profile projects; Haire believes the firm’s still modest scale is in fact an advantage. “We’re nimble and able to adapt quickly,” he says. “Being younger, we are all digital natives and have always embraced technology to improve our workflow.” Since the practice’s inception they’ve used BIM but also ‘rapid prototyping’ of physical models using 3D printing, which Haire says has enabled both offices to grow by allowing them to be “more efficient and targeted with our time.”

The practice’s core values are that they’re ‘recognisable, disruptive, memorable, and powerful’ – though he stresses they are “never disruptive for the sake of being different. We know we can offer viable solutions that push conventional boundaries,” he explains. “We offer something unexpected that will push the conversation on.” These are principles that he says also apply to how they work together – and how they look for new work. “We’ve had to be innovative in order to get in front of decision makers,” he says.

Projects
The practice has expanded its reach across various sectors. To date most work has been in commercial offices, although currently in the pipeline are housing towers in Mumbai, a headquarters and workshop for a bus manufacturer, and high end offices in Mayfair.

Haire picks a Covent Garden office refurbishment for Royal London Asset Management as a project that showcases their strengths, with design’s power to attract workers back to offices particularly salient at the moment. “It’s more relevant than ever that these spaces have their own character, inspired by their unique locations,” he says. They used Racing Green to introduce a “bold twist of colour” and included arches referencing the nearby London Transport Museum; “From the outset we were determined this would not be the typical spec fit out in white and grey,” he says.

Currently the firm are working on the M-Sport Hotel – a 120 bed hotel forming part of the M-Sport Rally complex in the Lake District, featuring a timber lined entrance hub and a pitched roof emulating the surrounding landscape. It will be reached via a dramatic road bridge reaching across a lake, “snaking like a race track across the water’s surface,” Haire explains. He says that this building is “an opportunity to test our developing process as we move towards carbon negative buildings, experimenting with cradle to cradle design and onsite renewable energy generation.”

Recently, the practice was the only UK firm to make the top six in RIBA’s Ancient Tree Civilisation and Residence Future International Architecture Design competition, which was “exhilarating,” says Haire, “the whole studio was involved.”

Their design, for an ancient forest in China, featured a new platform between the forest floor and tree canopy which would leave both areas untouched. “Arguably any development on the site would be inappropriate,” Haire explains. The buildings would be accessed from the ground via glass bulbs hanging from the platform. “Our ambition has always been to test ourselves by designing in different cultures and climates,” he says. “This competition was a fantastic opportunity to do this and taught us a lot.”

Coping with Covid
Over the last 18 months, real time rendering software has allowed the team to share ideas as they develop, from their homes. “It’s immersive and engaging and can easily be paired with VR,” says Haire.

The practice took on a new studio space in August, and while Haire says it’s been frustrating not being able to fully use it, it has given them an opportunity to figure out how best to use the space more collaboratively. It occupies a glazed shopfront on the ground floor of a Victorian brick warehouse, and Haire explains how they have put their ‘model workshop’ at the front, showing their ongoing projects to the public. “We’ve focused on prioritising an area for equipment for collaboration,” he adds. “When we need more space in the future, the plan is to take additional shopfront space, with perhaps different equipment to allow the team to work flexibly between offices.”

Haire says the key takeaway from the pandemic is the need for flexibility. “For architects the design process is best done in person, but it may be that we can organise this time into focused design ‘sprints,’ allowing us to work more flexibly the rest of the time,” he says. “Working remotely has also got us thinking further ahead about a virtual studio in which we might be able to log in and work together in an online world. Technology is rapidly making ideas like this possible.”

Overall, Haire describes the studio’s feelings towards the future as “very optimistic”, saying they will continue to seek opportunities to work with people they believe share their outlook, both in the UK and internationally. “We recognise there are huge challenges ahead and big changes in the way we construct and use buildings, but we also realise that we are uniquely placed to make a positive impact.” 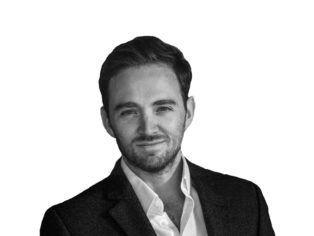 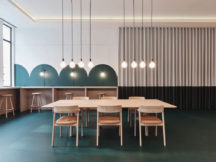 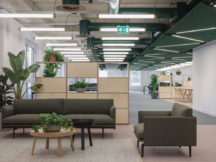 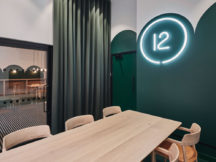