After recently turning 35, well-established practice Maber decided to reinvent and ‘reboot’ itself, James Parker spoke to managing director Ian Harris to find out why

Maber Architects was founded by keen cricketer Colin Maber in Nottingham in 1983, and as MD Ian Harris tells ADF, specialisation was not the watchword ‘off the bat.’ “Like most fledgling practices, work was initially a mixed bag,” but over the next 15 years, a “steady backbone of commercial and industrial projects” saw the business grow to around 20 staff. Maber initially imbued the practice with a “sportsman’s approach,” says Harris, stressing both the “importance of the team and the ethics of business.”

The founder (who left the firm in 2005 to pursue a career as a developer) had an ethos combining “fair play, training, attention to performance, and competitive drive” – this characterised the firm’s first two decades, but “remains in the DNA of long-term employees,” says Harris. He adds that in recent times the emphasis has shifted, the firm “turning its attention more deliberately to promoting and enabling design excellence, and the active pursuit of behaviours that encourage this.” Now a large practice consisting of five offices and 72 staff, the challenge is to ensure the benefits of that ethos are understood and pursued across the piece. “As a much bigger business we have had to capture and record our ethos in a way that 20 years ago would have just been intuitively understood by everyone in our one office.” One key attempt has been a concise, easy to read document produced for staff called ‘A Common Purpose,’ setting out Maber’s vision, mission and practical goals.

The firm’s fast growth was sustained by the mid-90s residential boom, with multi-storey schemes followed by sports and industrial projects for clients including Trent Bridge and Rolls-Royce. The founder drove diversification in the firm’s offerings, and this was continued following a management buy out in the year of his departure. Landscape architects and interior designers were among the additions to a growing workforce; a sister company Maber Project Planning (offering QS as well as project management) was formed. In the past two decades the firm has seen a lot of activity in the education sector, across schools, colleges and universities, together with more work in historic and cultural buildings.

Although it has strengths in particular sectors, Harris says Maber has “always and quite deliberately been a general practice,” working with “as many different clients as possible.” He says the business’ resilience is proof of the success of this strategy: “This has enabled the practice to follow rising fortunes of different sectors, and avoiding the worst effects of downturns.” He cites the fact that despite the fact there have been several recessions in the last 35 years, only two redundancies have been made (in the early 90s). The Nottingham HQ now has three teams – the Derby, Leicester and Birmingham counterparts each having one. The London branch is a ‘touchdown’ office, with “only a few staff regularly in and out of the workspace.” While teams are led by senior staff, “job title is much less important than the job they do looking after their team, and the projects and clients they are working with.”

A flexible, collaborative approach characterised by staff often working across teams – is evident, feeding into the company maxim of ‘One practice, multiple locations.’ If a new specialism is required on a particular project, says Harris, it tends to be provided by an experienced colleague, deployed alongside a team, and temporarily working in another office. While Nottingham has “the most noticeable sector split,” – industrial and commercial, residential and higher education projects – these are all delivered by staff at other offices too. The founder Colin Maber initially wanted the firm to work as a co-operative, but, says Harris, a limited liability company turned out to be the order of the day, “to give employees more security of income.” The collaborative aspect persists throughout the work itself though, embodied in the six ‘values’ set in stone by the directors. These include “promoting challenge and accountability,” “expressing appreciation and valuing each other’s work,” “doing what we say we will, when we say,” and “treating each other respectfully and looking for the best in each other.” Harris sums up the management approach to nurturing positive team working: “Focusing on the relationships as key to good working practice is sometimes hard to explain, but to keep on track we invite 360 degree reviews for the management team on how well we individually deliver against these values.” Systems and software are of course fundamental to supporting this collaboration. “By making communication easier, more versatile and more useful, we promote more interaction, knowledge sharing and involvement,” says Harris. The firm employs Slack (“a kind of Facebook for business”), as well as Zoom video and voice conferencing, Trello (“project post-its on steroids”) and project knowledge hub Salesforce, as well as a custom-built technical info resource Knowledge Base. There is a full time BIM manager, looking after “workflows, processes and standards – not just software, but the real meaning of BIM!”

Despite the firm’s successes, with tough trading conditions as well as what Harris describes as a combination of “increasing competition, stop/start projects and decreasing profitability,” a reassessment of the business was called for. “We knew we had to dig deep into the habits and assumptions we had grown up with.” He even admits that “pockets of people were in a rut; not as engaged as they could be,” so the firm decided to emulate start-ups, and “try to harness the infectious energy and investment that they are defined by.” He enthuses about the merits of such firms, where “everyone is focused on a common goal, they jump between roles, and try out different things – they look for innovation, change and growth.” An away day last year helped gauge staff views on how teams could “challenge each other to do better.” Working groups – introduced to be a “creative engine room” now produce ideas presented bi-monthly to the whole management team. The most noticeable practical change to the way the ‘rebooted’ firm works is its move to “agile working,” i.e. staff members being freed to work as flexibly as possible. Harris admits however that “this requires some cultural shift – people can be concerned they are disadvantaged when away from ‘their’ desk, and team leaders can be suspicious work isn’t getting done when people are not in the office.” The new Leicester office, in a former Victorian shopping arcade, is a test bed for how Maber intends to run things in future – “moving past the anchors that hold you to a desk,” says Harris. “The ‘big’ monitors are scattered around, , there are a variety of spaces to collaborate, withdraw and be quiet, or be noisy, or prepare food together.” Feedback is “universally positive,” he says. Challenges remain, from the more practical (“too many people have their attention diluted by tasks that could be better distributed to a more specialist support team”), to the macro: “We face an uncertain period politically and economically.” However, with growing amounts of work in the PRS and student residential markets in the Midlands, and busy BIM and landscape architecture teams, the firm remains on a strong footing, the MD asserts. “There is always more to do in the refinement how we work,” says Harris, “but we remain committed to challenging ourselves to stay fresh, hungry and creative.” 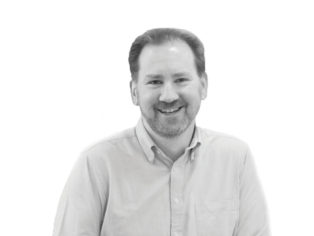 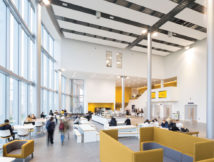 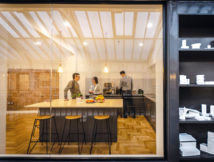 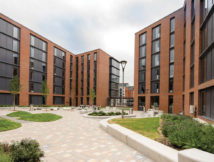