James Parker spoke to Tim Burgess, one of the founders of a young practice which has quickly evolved from a two-man set up to a firm making its name in London and beyond.

CoveBurgess Architects has been in existence for less than six years, but it has gained a strong reputation in the commercial and residential sector, particularly for its varied portfolio of refurbishments. The London Bridge-based firm puts the emphasis not on esoteric architectural indulgences, but on helping clients on finding ways to maximise asset value in a simple, clear way, and provide “more with less”.

Tim Burgess hit it off with his future co-director Dan Cove on the train to Bath where they were both visiting architecture tutors at the University. Tim was at MacCormac Jamieson Pritchard but was looking to set up on his own in the residential sector, and engaged Dan, a director at EPR Architects, as a “sounding board.” Dan put a few clients his way, and, says Tim, “it was a natural step for us to start a partnership.”

Dan brought with him “a great black book of commercial clients, which is now the bread and butter of our work”. Tim’s background is “more complex buildings – heritage, residential, challenging refurbs and education projects, with difficult stakeholder work.” He says by contrast, Dan is “an architect with a capital ‘A’, who does the sketches and has the vision, I’m more the people person who does the collaborative thing, trying to draw things out and get everyone to that comfortable place.”

They founded the practice in September 2012, with Tim’s architect assistant and a former colleague of Dan’s manning the phones while he sought new business. Tim tells ADF: “It was very ad hoc and low key, working all hours, and as soon as we started getting projects in we started employing people.” The firm now has nine key staff including the two partners, including associate Katharina Breuer (who Dan had worked with for a decade at EPR).

A search for clarity

Tim and Dan’s teaching careers have helped bolster the practice, with graduates from Bath now featuring among its ranks. Tom Radenz was taught by Tim eight years ago, and Oliver Bawden another qualified architect now running projects. Tim comments: “The link to teaching is fantastic because it forces you to clarify your thinking and speak in plain English. Often, you use shorthand and might say to a student ‘we need to do that in a much more Miesian kind of way’, and they say ‘what are you talking about?’”

With the majority of the firm’s clients investment/pension funds and charities, Tim says that this focus on clarity and simplicity has paid dividends when it comes to providing effective advice. “It has become a touchstone – how much can we make things simple, clear and direct.” He adds: “You need to understand your clients’ world and address them in the most explicit terms. This comes through in all of our work now, particularly when we write documents for planning – short sentences, no fluff, or adjectives, simply statements of fact.”

Tim is acutely focused on the importance of giving the right advice to clients, and this has stood the practice in good stead by gaining trust from risk-averse firms. He paraphrases the famous sceptical quote of architect Cedric Price – “ask an architect what the problem is, and he’ll tell you the answer is a building”. However, says Burgess, “In a way the higher state of being from a client’s point of view is to become a trusted advisor, where you understand what their actual problem is, and try and help them solve it – which may or may not be a piece of architecture.”

Burgess says that the firm benefits from clients’ long-term approach to projects: “For investors, value has a different meaning, it’s not about cost cutting, it’s trying to make sure they have the right product for the right market.” He adds that the firm also “prides itself on how it works hand in hand with contractors,” for example on getting interfaces between packages right, but does counsel that “you can get too caught up in the detail.”

Tim Burgess says that the big design driver for the firm is “to make things elegant, simple and apparently effortless”. He uses the analogy of “arriving with your granny, does the building announce itself and make itself readable so she can find her way without someone explaining its architectural meaning?”

One example is a refurbishment of the entrance to a substantial office building in South Quay in Docklands (Harbour Exchange), where CoveBurgess moved the entrance, added a large canopy, and “made the reception visible from the street so you could see where you were going.” He continues: “It took a bit to get the client’s head around the idea that when the building is of a certain scale, the entrance needs to be of a commensurate scale to even register on your perception.” Burgess adds that in terms of central London, “A building’s address is one of the most fundamentally underrated aspects of commercial building. By simply moving the front door, you can increase your rental value.”

An office fit out in the upper floors of the 1930s Heal’s Building on Tottenham Court Road in central London faced the challenge of a workforce expanding from 35 to 80 people. The client, the government agency rolling out smart energy meters Smart Energy GB, were “writing a brief for an imagined future,” so there was an element of crystal-ball gazing for this “characterful” building.

In addition to “using the funny layout to naturally subdivide spaces,” the architects designed a bespoke desk with a kink in it that could tessellate in various ways, so could be clustered to suit the client’s needs, and would “always provide a space where someone could stop and talk to you,” assisting collaboration. Bolstered by the trust placed in them by the client, CoveBurgess “completely recalibrated the cost plan” to around a third allocated to furniture. Burgess says: “we cut to the chase of what was the actual problem, and the simplest solution.”

The firm has been busy upgrading underperforming out of town business parks too, notably refurbishment schemes at Voyager Place in Maidenhead and Valiant House in Crawley. He says the brief is often tightly focused around the expected rental income, “it means you don’t waste time doing things.”He says it’s a case of “putting the ego away for a moment away and asking ‘what’s the client’s driver here.”

He says that in such commercial schemes, the firm focuses on “addressing perceived value – areas that need to look and feel a certain way. We apply a centre-of-town benchmark then find a way of doing it without spending a great deal of money”. In the case of Kingsmead Business Park in High Wycombe, adding a small cafe was all that was needed to give a sorely-needed “sense of presence or destination”. The site went from 50 per cent let to 95 per cent let over the next 18 months.

Voyager Place was a good example of how the firm created value and added an individual look for a client using lighting design including careful product specification. Says Tim Burgess: “We tend to use Belgian manufacturer Delta Light – they’re not the most expensive, and they’ve nailed making it as simple as they can be. Our architect Tom Radenz spent a great deal of time organising LED strips in patterns, which became a sort of branding.”

One of the firm’s most recent projects outside London to get underway, and which is sucking in a large portion of its staff, is a 70-unit residential scheme on the main Gloucester Place thorough-fare in Brighton. Replacing the derelict Astoria theatre, Brighton Rox is “a reference back to the 1930s idea of urban living, where everything is on your doorstep,” says Tim, adding, “that only comes with density.”

Tim puts a recent slowdown in commercial work to the effect of Brexit uncertainty, which extends to international investor clients holding back on that investment. However the residential sector is continuing to motor in London, and Tim is ambitious to grow the practice and work on “more urban, and complicated” jobs involving “real architectural expertise.”

However one of the firm’s key strengths is its agility, as a small, but growing practice full of talent. “We have a really great, flexible unit at the moment, we all sit down every Monday morning and regroup, we can absorb a lot of stuff.” 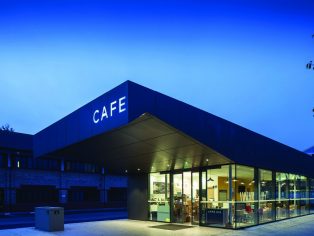