When two generations of the Wilson family found neither could afford a self build, they did what families do – they pulled together to create a stunning home. By Mark Williams

Marion Wilson has abiding memories of looking after her elderly mother in her final years, so when her daughter suggested combining their homes it made perfect sense. Marion and her husband Keith had lived in the same bungalow, in a sleepy Hertfordshire village, for 40 years. It was their second home in the same village, the first having been built by Keith – a telephone engineer by trade – in the mid-1960s. “I used plans from Practical Householder,” Keith told us. “It was a three-bedroomed detached home, which I managed and built from the foundations upwards. It wasn’t completely straightforward; I had wanted a Yorkstone chimney but the planners weren’t keen. Even when I chose the bricks, I discovered just before we were about to start the build that there would be a two-year waiting list to get them, so we ended up using a more common brick.”

Sadly, the Wilson’s country idyll didn’t work out as planned. The house abutted the local recreation ground, and the local youths on motorbikes caused so much noise and trouble, they eventually forced the Wilsons to start looking for somewhere else to live. When the bungalow, just around the corner, came up for sale, they grabbed the chance to move.

Built in 1948, the bungalow was of its time, with 20cm thick walls and not the most attractive building. But it had the position and outlook the Wilsons wanted, so they stayed and raised two daughters. Both now have children and homes of their own.

“It was my daughter’s idea,” says Marion. “She said ‘I want to look after you in old age, and it would make sense to pool resources and build a house for us all to share. But I don’t like your bungalow.’ Having cared for my mum, I knew what she meant.”

And so a plan was hatched in which her daughter’s family, including husband and two children, would sell their home and, together with Keith and Marion’s savings, replace the bungalow with a self build. A legal agreement would ensure joint ownership of the entire family.

“We had wanted to build a Potton home way back, when we built our first house,” says Keith. “But back then, we couldn’t afford it. This time, we went off to see the show homes and decided on the Gransden as the basis for our build.”

The first step in the build was to get an Ordnance Survey site plan, and get drawings done to assess the street scene. This work was done by MS Ford Associates in Cambridge. Keith and Marion also ensured the neighbours saw and were happy with the plans as they progressed; as a policy, this not only defrayed the chances of objections but actually generated one letter of support to the planners.

Getting the plans through was actually very straightforward, says Keith. His past experience was that constant communication throughout usually pays off, as it did this time, but the ‘fit’ of the design with the row of older homes in the village was a great help.

Like all Potton homes, the Gransden is a timber-framed building. It is a traditional style with a great deal of exposed timber, both outside and in. The Wilsons decided – with the assistance of Potton’s recommended architect – to go for a double-fronted design with two gables, the first floor rooms contained within the roofspace.

“One of the great things about a timber-framed house is that the interior walls are all stud, so you can adapt the interior to suit,” says Keith. In the event, the Wilsons made nine revisions as the design process progressed, including some changes made during the build.

The majority of the contractors were those recommended by Potton in the hefty self-build manual Potton supplies to customers: “I did shop around for other suppliers but Potton’s seemed to be no more expensive,” admits Keith. “In fact, 90 per cent of our suppliers were brilliant and couldn’t have been more helpful.”

Of course, once the bungalow had been removed, Keith and Marion would need somewhere to live. They decided to put an ageing two-berth touring caravan in the garden and Keith, ever resourceful, built a makeshift outside loo plumbed into the existing sewer to improve the comfort levels; in fact, says Marion, the loo was something the contractors were particularly pleased to share! The two families stored furniture both in a marquee they erected and in the garage when the build was underway.

Marion says she remembers the final day of the demolition, washing the dishes in the remaining part of the kitchen and looking down her garden at the spring scene while behind her was just open space: “It was really quite surreal,” she says.

“It was a reasonable summer,” says Keith. “We did have a few showers – in fact, we planned the kitchen with the kitchen fitters while standing under umbrellas where the kitchen was going to be!”

The Wilsons lived in their caravan for seven months, their daughter and family renting a cottage locally. But they got in before winter and the wait was worthwhile.

The Wilsons’ home has a traditional feel about it, half-brick with exposed timber on the gables and extensive use of unpainted wood for the door frames and windows. It has a traditional tiled roof. Double-fronted, the west side is the living rooms and the east houses a double garage, which the Wilsons say could easily be converted into additional living space in the future.

Inside, the impressive entrance hall has a feature ‘gallery’ first floor hallway overhead, the living room off to the left, the kitchen diner straight ahead and a corridor to the right leading to a study which, if required, can be converted into a bedroom and a large bathroom. The kitchen diner is the home’s main space and has accommodated 30 people for Christmas. The dining area is very bright, with a lot of windows in a ‘sunroom’ arrangement, and a light Travertine tile floor. The kitchen has doors leading into the utility room and a small bathroom.

The gas-fired boiler system – which feeds underfloor heating on both floors, is in a separate room with access from an outside door. The Wilsons say the high-grade insulation and relatively airtight construction ensures this is very efficient.

Upstairs, the central hallway leads to five bedrooms, two of which are en suite. It’s very spacious, with the gable edges used for storage and large walk-in wardrobes in four of the bedrooms. The Wilson’s opted for an aged appearance for the interior timbers, with scalloped edges and a dark stain. Apart from one bedroom, the house is floored throughout in either tile or laminate flooring to help reduce dust.

The two living rooms both sport brick fireplaces, the front room having a feature open fireplace, the family room a neat woodburning stove – which Keith says rarely needs to be pressed into action – and an attractive log store inset into the brick wall. A door between this room and the kitchen has a glazed panel, illustrated with butterflies by a local artist.

Keith says he managed to take the whole process of supervising the build in his stride, using his experience but also paying credit to his contractors which he says were, with few exceptions, helpful and flexible. Potton’s guidance was excellent, though Keith says he belatedly discovered that, as he developed the property, VAT could be reclaimed on all of the elements of the permanent structure.

But the Wilsons’ home is first and foremost an illustration of how a family, working together, can achieve self build dreams which would be beyond the reach of a single generation. “I don’t think this would work for all families,” warns Marion. “You have to be very accommodating. But it works very well for us.” 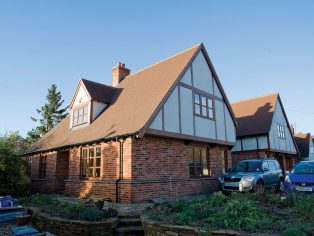