With state secondary schools in the London Borough of Sutton (LBS) experiencing an upturn in subscriptions through recent years, the council were pushed to find a way to accommodate the growing local student population. LBS’ need neatly coincided with plans for Sutton to host the London Cancer Hub (LHC), a masterplan with the goal of creating “a global centre for cancer innovation.” The centre which, when complete, will offer more than 280,000 m² of integrated life-science buildings, is envisioned not only to attract a swathe of skilled scientists and leading clinicians; careful thought was also given to those already inhabiting its immediate surroundings.

As the first ‘One Planet Living’ council – a framework adopted by Sutton in 2009 to encourage sustainable development – it was important that the building had exceptional green performance. Architype was appointed in 2016, having been selected from Sutton’s consultant framework, after successfully completing designs on the nearby Hackbridge Primary School, a ‘Passivhaus Plus’ zero carbon school. LBS made Passivhaus compliance a key requirement for Harris Academy.

“The vision is that the school becomes an integrated component of the LCH campus,” explains Christian Dimbleby, associate at the firm and lead architect on the project. Significant potential was seen in “a science academy that develops local talent and maximises its close association with the wider campus,” says the architect. Harris Academy Sutton not only provides the first building blocks of the lives of many young Londoners set to walk its corridors, but also of the LCH masterplan.

Form & function
In creating a substantial new building in a quiet suburban borough of London, the architects sought to ensure that the surrounding properties were considered throughout the project. Initial designs positioned the mass of the building along the south-west perimeter of the site in a single curved block reaching five storeys in parts, however after public consultation, the architects were forced to rethink the school’s plan.

The resulting design is made up of one central four-storey block with a series of alternating wings which step down to two and three storeys, ameliorating the passage of light to neighbouring properties. The site also had several important large specimen trees that the rethought design accommodates more successfully.

As well as the reduction in the scale of various elevations, the building also maximises usable outdoor space for terraced seating and social courtyards. Care was taken in minimising the surface area of the building to achieve high levels of solar gain, while the north-south orientated design facilitates Passivhaus by further optimising gains in winter to minimise heating demand.

In section, the building adapts to the 6 metre north-to-south slope of the site – noted by Christian Dimbleby as one of the key challenges of the plot – with its ground floor built into the relief. “The layout is cruciform,” explains Dimbleby, “with a central spine encouraging the flow of users around the building; the students navigating primarily east-west from the school entrance into the secure playgrounds.” Communal access runs from north to south with the main entrance at the north for visitors, and the south side looking out to the London Cancer Hub. Community access to facilities was anticipated around the sports and hall spaces, located on the lower and upper ground levels at the south end of the site.

Materials matter
In line with Passivhaus standards, the architects carefully considered their choice of materials, Dimbleby explains: “We employed a natural colour and material palette, including copper and timber, so the large form would sit sensitively in its suburban environment.”

According to Andrew Thornhill, of landscape architects Churchman Thornhill Finch, the key to balancing the building with its surroundings “was ensuring the mass of the school was central to the site and that the storey height dropped to the edges to meet the suburban context.” Brick is used on the ground floor plinth, adjoining external retaining and blade walls, speaking to the predominantly brick houses surrounding the site. Thornhill continues: “Planted terraces to the north further softened the elevation where overlooking was most direct.”

Materials also play an active role in communicating the function of the scheme and its parts, with copper signalling the community access spaces such as the sports hall and assembly hall, but also nodding to the building’s scientific roots.

Timber cladding was used for its low carbon properties, in addition to the aesthetic that it would provide; lighting up the large mass, without imposing on students or neighbouring properties. “We used robust triple glazed timber-aluminium composite windows and included timber extensively internally, bringing the outside inside,” says Dimbleby.

He continues: “We used a concrete ground floor with Cross Laminated Timber (CLT) panels above, and a flexible glulam frame.” With circular economy principles in mind, the structure was designed so that, at the end of the school’s minimum 60-year life span, the frame can be dismantled and reused. CLT floor and roof slabs support the upper levels and roof while endowing the classrooms with greater flexibility; none of the internal walls are supporting, so classrooms can be expanded and contracted as needed.

A labour of learning
Architype worked with educational experts Lloyd Wilson Partnership to develop designs for the site, integrating pedagogical theory to inform the school layout as well as meeting the Department for Education’s requirements pertaining to space and function. Passivhaus standards also provide the foundation for internal environments optimised for educating the school’s 1,275 pupils, as Dimbleby explains: “This means plenty of natural light, low CO2 levels, and stable internal conditions with no draughts or hot spots.” Sensors monitor CO2 throughout the building and teachers are notified when to open windows by means of a light (going against the received wisdom that you are unable to open windows in Passivhaus buildings).

The architects designed large class spaces, including a double art room and double laboratory; the school expects the laboratories to be used in community demonstrations and extra-curricular activities, such as British Science Week. Considering Harris Academy’s strong community ethos, the areas most frequently used by the public such as the all-weather sports hall and the drama studio all offer secure public access.

For the interiors more generally, the architects made sure to retain views out of the end of most corridors. This was done to provide users with a visual connection to the suburban homes and state-of-the-art London Cancer Hub development outside, helping embed orientation for users. Ceiling heights exceed 3.5 metres throughout the school, with the ground floors benefitting from up to 3.9 metres, providing a spaciousness conducive to thinking and learning.

“Natural, high-quality materials command respect from students with minimal signs to disrupt the flow and peace of the space,” says Dimbleby. They also contribute to the building’s high internal air quality.

The 715 m² sports hall is internally finished with exposed timber. Staircases throughout the academy are open, modern and colour coded for subtle wayfinding. Linoleum and rubber flooring has been used in the shared spaces, and ceilings in the corridors are clad with timber battens. Externally, spaces were configured by the landscape architects to offer usable study spaces away from the main active sports area to the east of the site.

Consciously mimicking aspects of a typical university campus, circulation around the building is “celebrated,” says the architect, with “key nodes offering space for students and staff to dwell, exchange ideas and discuss studies.” The design also allows users to occupy the roof terraces on the northern wings with all structural capacity built into the school for future use. “The design exemplifies civic pride, with the study and circulation demonstrated in the school’s grounds continued inside,” asserts Dimbleby.

Green goals
“We maintained some of the BREEAM principles of the design, including water savings, but Passivhaus allowed us to guarantee energy savings,” remarks Dimbleby. The 10,625 m² school is heated by just one modestly-sized boiler feeding the small radiators in the classrooms. The architect received word from Harris Academy’s headteacher that, during the school’s first active term, from September to December 2019, the boiler was active for just one hour.

The outdoor areas were configured to minimise off-site material disposal and to make use of the existing car parking areas where possible. “We also wanted to promote biodiversity across the site,” says Thornhill. Photovoltaics were fitted on the roof, bat and bird boxes installed in surrounding trees, and a sustainable urban drainage system was used. Green walls and rain gardens are other additions that boost the building’s green appeal.

While incorporating these eco-friendly features into the design does come at an elevated cost, with the building exceeding £3,750 per square metre, energy spend is estimated to be only 10-20 per cent of that of a regular school. From running costs through materials to massing, the school leaves only a light footprint. With this added to the pupils’ wellbeing as key drivers, it is clear that Architype has designed a school for the future. 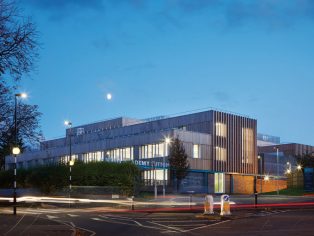 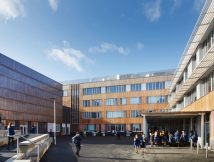 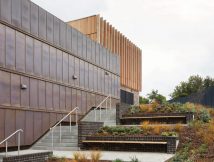 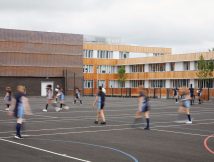 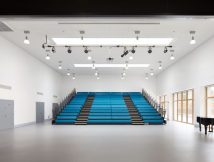 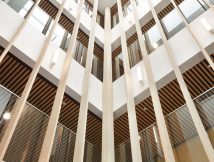