A sensitive restoration of a dilapidated but listed ‘Mission Hall’ in west London posed a series of challenges, not least ensuring that external fixtures such as rainwater goods met strict authenticity criteria. Neil Davies Architects report on the project

The task of transforming a Grade II listed hall with a varied past in Hammersmith to an open-plan co-working office space, included maintaining the distinctive original exterior fabric of the building. This was a key part of giving the building a long-term future, together with a reimagined interior. The design approach taken enhanced the entire building whilst preserving its special historic interest and character.

Situated in Liffey Road in the Bradmore Conservation Area of Hammersmith, the building was completed in 1883-4 and designed by noted 19th century architect Hugh Gough. While originally built as a church hall, it was also used as a working men’s club, a kitchen feeding the poor, and since the 1960s a studio workspace of a scenic artist specialising in backcloths for stage and film. When the studio closed in 2014, the building was used temporarily as a workshop and for storage, as well as a boxing gym prior to the recent category A redevelopment into 7000 ft2 of office space.

The building had suffered from years of neglect and disrepair prior to its renovation. The roof and guttering leaked and there had been some rooflights installed that were not compliant with its Grade II status. Furthermore, with this historically significant building in a poor state of repair, the highly decorative east and west facing Venetian Gothic facades required sensitive and accurate restoration in order to retain their heritage value. Similar in appearance, these two elevations are detailed with crenulations and sculpted finials, and ogee-shaped drip mouldings with detailed finials and stops. Three striking lancet windows are made up of individual trefoil lights (some with coloured glass) and there are cusped door arches.

One of the challenges was the fact the hall was landlocked with four domestic residences sharing a party wall. The changes to the elevations included repairs to brickwork, stonework, external joinery and various glazing to the existing fenestration.

The building’s (non-original) asbestos roof was also replaced with traditional natural slate tiles, which would likely have been the original material treatment. Conservation style rooflights were installed to the central area of both pitches of the roof to draw light into the main space and to minimise visual impact on the original and decorative iron roof structure. Internally, new mezzanine floor plates increased the workspace provision to 7,000 ft2 and were naturally lit via the new rooflights and the existing clerestory lantern overhead.

The existing rainwater hopper and downpipe system on each facade was of a poor quality and featured painted plastic with no detailing. A porcelain white cast iron style hopper in the Gothic design was specified from Brett Martin to provide period authenticity and detailing, replicating the five arched windows on the front of the facade. A 105 mm round downpipe in Porcelain White was also installed to match the white painted cement render of these distinctive facades. This rainwater solution remained architecturally true to the original features of the building.

With this redevelopment and restoration now complete and the future of the former Mission Hall now secured, the use of modern materials has fitted seamlessly with this listed building, and ensured an architecturally sympathetic appearance was achieved. 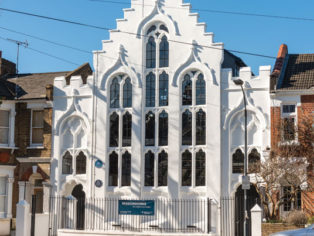 A hopper and downpipe were installed in Porcelain White to coordinate with the exterior, and provide an authentic cast iron-style look that befitted the Grade II listed building