Self and custom build homes make up around 40 per cent of new homes throughout the developed World, yet in England, they make up just 5. Jack Wooler speaks to Andrew Baddeley-Chappell, CEO of the National Custom and Self Build Association (NaCSBA), on why this is, why it’s an issue, and what can be done.

England’s housing market has been long-suffering in many regards, but one that goes little-noticed or understood is the lack of custom and self build homes.

With shows like Grand Designs dominating the field for the uninitiated, many are led to believe that self and custom building is nothing more than expensive, often life-consuming tasks of architectural grandeur.

While of course this is true in many cases, the industry offers a whole range of options – which don’t always come at a premium.

A fact that is usually overlooked in this country is that around 40 per cent of new homes throughout the developed World are self and custom built, with the number being even higher in countries like Germany. In England, however, this number is just 5 per cent.

Andrew Baddeley-Chappell, CEO of the National Custom and Self Build Association (NaCSBA), has been fighting to educate and support people in their journey into the sector, and explains to me how we got here as a country, what we can do about it, and that, at its heart, self and custom build is nothing more than giving buyers the agency they get in any other purchase.

What is self and custom build

There can be a lot of confusion about the difference between self and custom builds, and what each method actually entails.

“It’s not usually about the customer building the homes themselves, though of course some do,” explains Andrew. “It’s really just having a home that’s tailored to their own individual needs and specification.”

As such, self and custom build homes can range from working with a developer to configure  a home on the internet from a  range of designs, layouts or materials, right to creating an extremely individual house that is architecturally unique to them.

“Broadly,” he explains, “self build is about a home on an individual plot, and custom build is building on a site where there are many different plots available, and typically where there’s a ‘custom build enabler’ who lays out the site, prepares the roads, gets services installed to the plot and sets out how the house must be built – but still leaving the customer with the choice of house that will reside in their plot.”

Detailing custom build further, he describes a home park in Frankfurt, Germany, as what he terms a “kind of house supermarket,” with over 70 different homes in one place. There, he says, you can park up, have a meal, and wander around the 70 basic options of homes, all of which you can discuss with the manufacturer about how they can be varied and changed for your individual needs.

“At its heart,” says Andrew, “this customer choice is what custom and self build is really all about.”

He reports that trying to get people to understand this is one of the biggest challenges for the sector currently.

“It’s a problem that just doesn’t exist in every other developed country in the world, where this is just a normal part of how houses are built.”

In any other consumer market, customers are given choice and agency. Andrew uses cars as an analogy here: “In many ways, building a home is like how buying a car used to be; you’d go along to a garage and choose a car that’s already there – but around 20 years ago manufacturers realised they could sell so much more by letting the customers tell them them what they wanted, and then build the exact car they need.”

“That’s what happened in the car market,” he says, “and it’s what needs to happen in the housing market.”

Andrew argues that in the housebuilding sector currently, there are a small number of major suppliers who generally have a monopoly over new homes in their area and “only attract a limited number of people,” but enough for them to sell the homes “for the price they need to.”

“Even their own surveys show that many people do not want to buy new build houses, and somehow in the UK we think that’s normal,” he continues. “No one is surprised that most people don’t want to buy a new home.”

He compares this with most other products on the market; phones, clothes, computers, “everyone wants the latest of these with the best design and innovation.”

“If someone in this country wants to have an exciting home, they buy an old house and start again, or knock out the back of a house and build a modern glass and steel extension,” Andrew continues. “If new home builders were getting it right, buyers would say they want their old home to look like the new one they’ve seen being built up the road – and again, when you say that it sounds so bizarre, and everyone will think that’s funny, but really it’s not.”

“This isn’t something we should laugh at,” Andrew asserts. “We should think as a society how we got to this point, where we accepted that this was the way things are done.”

The Government well knows this, he notes.

Looking back at its 2017 White Paper, for example, the Government argued that the way we build homes hasn’t changed in 100 years, that the way in which we build them is inefficient, and that there is a lack of diversity, innovation and competition in the market.

The Conservative Party manifesto even included clear commitments to do more to help people to acquire land, and extend the Help to Buy scheme to the custom and self build sector.

So, what’s holding things up?

One of the most important barriers in this country is image, Andrew tells me.

When most people in the UK think of self building, one of their first connotations is the Grand Designs TV show which, according to Andrew, paints a very different picture to reality.

“Your typical Grand Design is on the one hand inspiring to the country, but it basically implies that if you are going to build your own home, then you have to be prepared to have a near breakdown in the middle of it and an extra baby by the time it’s finished.”

While he notes we “shouldn’t underestimate” the complexity of building a house – “there’s a reason why it’s done by professionals” – he says that, as Grand Designs is a TV show, it has a “very formulaic structure, and it’s nothing without the drama.”

Andrew continues: “I’ve met a number of Grand Designers, and many of them comment on the way in which they felt they came across in the programme.

“While it made for great TV, it didn’t chime with their views of the way the process worked or felt.”

This, he says, has led to both a generation of people that want to self build, “which is a wonderful thing,” but then given them some often “disingenuous” reasons as to why they shouldn’t.

“What we really need is normal, hard working every-day people to understand that this is an option that’s available to them, just like it is in every other country.”

Of course, when it comes down to it, it’s often up to policy to dictate change in the industry when the UK housing market isn’t serving customers in the way that most of the world’s markets are.

This is where NaCSBA comes in: “We are unique in being singularly focussed on growing the sector, and importantly, in driving the political and policy led changes that are needed to make this happen.”

Where architects have RIBA, and planners have the RTPI, NaCSBA intends to fight for the self and custom build sector, and, according to Andrew, it has already been instrumental in moving sector-benefiting policy forwards.

One of the most prominent of these policies, he tells me, was The Self-build and Custom Housebuilding Act 2015, which was then enforced by the Housing and Planning Act in 2016, and led to the creation of Right to Built registers – bringing a statutory duty on local authorities to maintain registers and then bring forward enough permissioned plots to match demands on the registers.

“NaCSBA was integral in working with Richard Bacon, the MP that introduced the first bill, and with the Government to deliver the second,” says Andrew. “We continue to argue strongly for greater Government support, lobbying and challenging those in power, and acting as the main driver of policy-led change to make it easier to custom and self build.”

“Just like your magazine,” he adds, “we also act as an interface with the public, the way through which people undertaking this journey can understand the best ways to go about it, how to join a register, how to complain if their local authority isn’t doing enough.”

Alongside this, NaCSBA also runs the Right to Build Taskforce. Funded by the Government, this is a consultancy service that offers free briefings to every local authority around the country to explain what they need to be doing to meet their duties under the legislation.

Andrew believes that many have now lost confidence in new build developments, with too many built “in the wrong place, for the wrong people, and with poor practices – especially among the mainstream housebuilders.”

This, he says, has led to “a huge imbalance of power between the housebuilder selling the home and an individual buying it.”

He believes of course that self and custom build is the answer to this. In order to make it work, however, Andrew makes it clear that there’s “a massive job” to simply educate people and make them think about it as the market matures, “which fortunately, it is.”

“When people begin to believe that this is an option for them, when they join the registers and look at the options that are available to them, options without massive premiums, they’ll realise that this isn’t about cost, it’s about choice – they don’t need to compromise,” he says.

“In the future, there needs to be all types of change, and apart from anything else, quite simply the major housebuilders will need to up their game to respond to the competition that self and custom build can bring.”

“All in all,” he concludes, “customers can only win in a market where they are given more choice.” 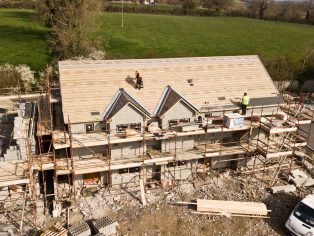