Newland Homes has started work on its inaugural scheme of zero carbon houses in North Somerset, laying the groundwork for industry-leading homes which far exceed the current building regulations and play a key role in meeting the UK’s climate goals.

Newland Homes has spent the last two years finessing the blueprint of its homes to achieve zero carbon. By jettisoning gas boilers in favour of air source heat pumps, increasing the quality and specification of solar panels, and upping the insulation levels, it has achieved a home which creates as much prime energy* as it needs at zero cost to the homeowner.

The 32 highly efficient, detached three, four and five bedroom homes in Tickenham, between the towns of Clevedon and Nailsea, will utilise Vaillant’s award winning air source heat pumps (ASHP), the aroTHERM. They are highly efficient and can extract thermal energy when outside air temperatures are as low as -25 degrees. The ASHPs supply heat to an underfloor heating system on the ground floor and radiators on the first floor, keeping the house at an optimised constant temperature by utilising the ground floor very much like a large radiator.

The zero carbon homes have been orientated to maximise solar gain and constructed with high levels of insulation to deliver significant energy savings. Depending on the orientation of the roof, between 12 and 20 high-performance solar panels by Viridian Solar will be installed to each property to generate electricity.

Jeremy Drew, Developments Director at Newland Homes, comments: “We are making a clear and tangible investment in the future by decarbonising our homes well ahead of the Government’s timeframe for lowering carbon emissions in new builds. We took the decision to accelerate the transition to zero-carbon and remove the barriers to adoption for our homeowners a number of years ago, as we feel that having a green mindset should mean more than simply doing what you’re obligated to do. As an industry we have a duty to be at the forefront of change and we’re committed to moving at pace to ensure our homes continue to have a positive impact.”

Gloucester-based Newland Homes celebrates its thirtieth year in operation this year, and Tickenham is one of two locations in the South West where the company intends to plant an ‘anniversary woodland’. These are created using dense, fast-growing native woodland which store carbon, improve air quality, provide a haven for wildlife and a place for people to connect with nature. Some of the larger trees, such as oak and lime, will offer homes to insects, birds and bats for the next four hundred years.

Newland Homes has always invested heavily in sustainable initiatives. Many of its recent development schemes include solar PV panels, water butts to harvest water, composter areas in the garden and integrated eco-bins; small initiatives which facilitate a change in consumer behaviour. At Tickenham, a large wildflower meadow with natural outdoor play equipment will be created along with the anniversary woodland, and hedgehog highways will be a feature of the landscaping. As with previous schemes, car charging points for hybrid or fully electric cars will also be pre-wired within the new homes at Tickenham.

Stuart Elmes, CEO of Viridian Solar, commented: “Viridian Solar have been working with Newland Homes since 2015, agreeing a national supply agreement in May 2020. We have been impressed by the company’s innovative approach to sustainability. With a focus on delivering homes that are both planet-friendly and desirable for house-buyers, Newland Homes already goes well beyond the minimum energy efficiency required by building regulations. We are extremely pleased that Clearline fusion roof integrated solar is part of this first carbon-neutral development.”

Steve Cipriano, Commercial Director at Vaillant, comments “We are delighted to be supporting Newland Homes with its ambitious plans to exceed current building standards, pushing for net zero homes on their Tickenham site. Newland Homes’ commitment to decarbonisation through tangible investment is a shining example of where the housing industry is heading in preparation for the legislation changes coming into effect in 2025. We are extremely proud to be able to deliver a low carbon solution with our award-winning heat pump, which has a global warming potential of just three, contributing to their carbon targets.”

According to energy assessments prepared by Briary Energy for Newland Homes, heating and powering a standard four-bed home constructed in 1995 creates 3.5 tonnes of carbon emissions per year. That’s the equivalent of nearly two hot air balloons of emissions evaporating into the atmosphere each year**, and it costs the homeowner around £785 a year for prime energy to heat and power. On this, and other forthcoming Newland zero carbon schemes, the corresponding carbon emission and cost is zero.

All new homes at Tickenham will be automatically enrolled on a zero carbon renewable energy tariff through British Gas. It is anticipated that the first homes will be ready for occupation in early 2022. 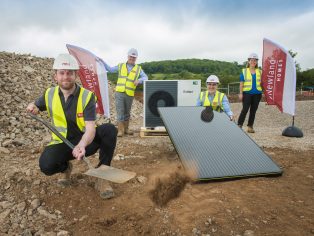