Construction of 500 new homes and 20,000 sq. ft. of amenity and commercial space is underway. The scheme forms part of the wider East Croydon masterplan which aims to regenerate East Croydon with new homes and improved public realm.

Leading housebuilder Redrow and regeneration specialist Menta, are pleased to announce that work is commencing on the second phase of Morello, an exciting mixed-use development next to East Croydon Station. Construction is due to commence in March and will form part of the wider East Croydon masterplan which aims to regenerate this exciting pocket of London with new housing and an improved public realm.

The dynamic Menta / Redrow joint venture successfully delivered more than 300 homes for local people with the first phase of the Morello project, and now plans to deliver the second phase, consisting of nearly 500 new homes.

Located adjacent to East Croydon station, the £200 million scheme will include 118 affordable homes, along with 20,000 sq. ft. of amenity and commercial space. The project will also bring improvements to the infrastructure surrounding the station, including a new station entrance connecting Addiscombe, through the Morello II development, into East Croydon station and beyond, as well as a landscaped public square

Mark Parker, Chief Executive of Redrow’s Greater London region, said: “We are thrilled to be working on the second phase of the Morello project. The first phase has already provided vital new homes for an emerging part of the Capital and has positively contributed to the local economy, and we feel confident that the second phase will do the same and much more.

“Croydon is undergoing an exciting transformation and is fast becoming somewhere Londoners want to live and work, and we are eager to be part of the process. Our shared vision is to provide better places to live through excellent placemaking, high-quality homes, improved public realm and local infrastructure, and we look forward to developing our relationship further.”

Menta has been a long-time promoter of the whole East Croydon masterplan, which underpins Croydon’s emergence as a major London destination to work and live.

Craig Marks, Chief Executive of Menta, said: “We have been involved in Croydon for a number of years, starting with the 6-acre Gateway site now being delivered as Ruskin square. Now working in joint venture with Redrow we have already delivered 300 new homes, including many affordable units, for Londoners. Menta are also in the process of considering other options to assist the Council deliver a new station and environment around the station with an implemented consent for over 100,000 sqft of offices and leisure uses on adjacent landholdings.

“We are of the philosophy that a regeneration story requires exceptional architecture, as this changes environments, and their perception as places to be. Whether living, working or passing through. We invited Make Architects to join the team and we now have wonderful public realm and landscaping framing our buildings from the railway, giving a perception of a less dense environment whilst delivering the all-important outputs of new homes and jobs.”

The long-term regeneration of Croydon town centre is being supported by a £23 million grant from the Mayor’s Regeneration Fund, plus over £26m from Croydon Council and others through the Connected Croydon Programme. The investment focuses on improvements to Croydon’s streets, squares and open spaces, and on supporting new and existing businesses, and builds on Croydon’s Opportunity Area Planning Framework which sets out a 20-year vision for Croydon’s future.

The hugely successful Boxpark drinking, dining and events space, next to East Croydon station, is attracting young Londoners to the area, while recently renovated Fairfield Halls entertainment and arts centre was reopened in September by London Mayor Sadiq Khan and Dame Judi Dench. 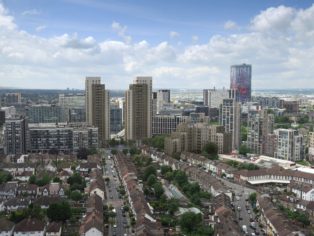