A Mapei Concrete Repair and Protection System has been specified for repair works at Shoreline Restaurant & Bar in Devon. The contemporary glass-fronted venue overhangs Paignton’s Eastern Esplanade and benefits from panoramic sea views. Over time, the building’s concrete columns, beams and soffits began showing signs of deterioration, with cracking and spalling caused by steel reinforcement corrosion brought on by the aggressive seaside environment.

Working for Main Contractor TDA Group, South West Concrete Repairs undertook site tests to identify defective areas. Once completed, South West Concrete developed a specification with Mapei in which all deteriorated and loose concrete was removed to form a sound, strong substrate with a rough surface. The exposed reinforcement rods were cleaned of all rust, then treated with two coats of one-component corrosion-inhibiting cement mortar, Mapefer 1K.

When completely dry, thixotropic cementitious mortar Planitop Smooth & Repair R4 was prepared by combining with clean water, with the addition of set-retarding admixture Mapetard ES to extend the workability of the mortar. As Planitop Smooth & Repair R4 can be used between 3mm and 40mm, it helps to reduce dust and noise during preparation and the same product can be used to repair and profile the concrete.

Due to the weather conditions, the repair works were completed as part of the first phase of works and Elastocolor Paint Anti-Carbonation Coating System was then applied later.

Mapei Elastocolor Paint is an elastic anti-carbonation coating which protects concrete and cement renders from the aggressive elements that can cause corrosion, making it an ideal choice in this instance for long-term coastal protection.

Elastocolor Paint is offered in a wide range of colours. For this particular project, Elastocolor was applied to an area of 500m²; the shade chosen from the extensive Mapei ColorMap colour range complemented the restaurant and its beachfront setting. 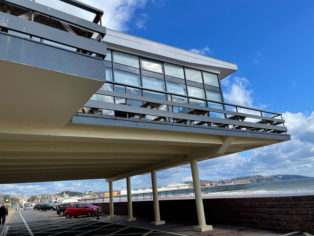 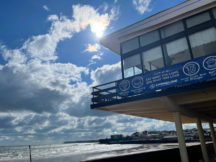