Luceco has recently supplied exterior amenity lighting to the famous village of Bournville. Over 90 Viva-City Pro street lanterns from Kingfisher Lighting, part of the Luceco PLC Group, were chosen to illuminate the streets and canal area of Bournville, some with the columns boasting the purple livery of the famous “glass and a half” chocolate bar that became the most popular chocolate consumed in Britain. The story of Bournville commenced in 1878 when the Famous Confectionary Manufacturer set up their manufacturing process in a meadow with a trout stream called the Bourn… and the rest is history.

Viva-City Pro is a modular, slimline, performance LED street lantern offering a choice of optics. Manufactured from high pressure die-cast aluminium, the luminaire is IP66 and IK10 rated and has an efficacy of up to 141 Llm/W and can produce up to 24,000 luminaire lumens at 4000K with a CRI >70.  The range offers 15W – 180W power options with 2,062–24,741 luminaire lumens respectively and an operational working life of 100,000 hours.

Viva-City Pro is at home in many amenity lighting applications such as urban environments and civic areas, car parks, streets and highways and offers a choice of optics with asymmetrical distribution. The optics include street and area options, as well as a 50° Flood Optic, 70° Street Optic and 70° Area Optic as used at Bournville, ensuring the light distribution pushed the illumination outward generating a rounded pattern with little light falling behind the luminaire mounting position. Mounting options include both 60mm post-top and side-entry and accessories include photocell and dimming options.

As early as 1875 this famous confectionary manufacturer produced their first Easter Egg, and the famous milk chocolates that “the lady loves” in 1915, and has been creating, inspiring and investing in a nation of chocolate lovers for nearly 200 years – a truly sweet success! 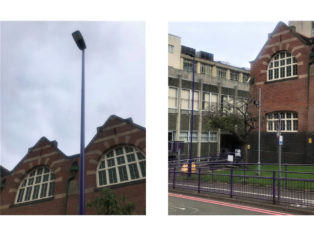