Demand for new build homes in rural areas is at an all-time high(1). For housing developers in off-grid locations which are ready to start projects in the near future, LPG still offers a cost-effective fuel choice, due to significantly lower build costs than other off-grid options such as Air Source Heat Pump or Electric Heating Systems.

The Calor LPG Metered Estate option is the closest alternative to a mains gas connection for housing developers in rural areas. Each property has its own LPG boiler in addition to a separate gas meter, which is individually read and billed by Calor – just the same as if the property was connected to the mains gas grid.

Depending on the size of the development, Calor can install between one and six  4,000 litre underground LPG tanks which are topped up automatically when needed, to ensure that all residents receive an uninterrupted supply of affordable, reliable, and secure LPG. And, as the LPG tanks are installed underground, site aesthetics can be maintained with limited visual impact on the site.

As LPG boilers are exactly the same size and have an identical flue clearance as mains gas boilers, this means they can be installed to the same housing layout designs that developers would use for a standard on-grid development. Unlike air source heat pumps (ASHP) or electric systems there is no requirement to install separate hot water storage. For smaller properties, up to 4 bedrooms, this also saves developers space, as the installation of an LPG combi boiler also removes the need for a hot water cylinder, nor is there a requirement to install larger radiators or underfloor heating. An LPG boiler also offers housing developers significant reductions in build costs, which, based on current building regulations, are as much as £5,000-£8,000 per plot against ASHP.(2)

Housing developers will also be able to offer new home purchasers all the benefits, comforts, and reliability of a full gas central heating system as well as optional gas cooking – despite the properties’ highly sought-after rural location – with many developers recognising this as a solid selling point.

Under current building regulations (SAP 2012), LPG has a lower fuel factor compared to oil and electricity, and therefore only small ‘bolt on’ energy saving measures are required to achieve building regulations compliance. Compared with electric or oil heating systems, there is no need to install solar PVs to compensate for the higher CO2 emissions of the fuel, and only low-cost modifications such as the addition of hi-therm lintels or wastewater heat recovery are needed alongside LPG technology to reach the required SAP ratings.

Under the current timeline for scheduled changes to Part L of the Building Regulations, which is linked to the proposed Future Homes Standard, it is outlined that to build a property to the current building regulations, the plot must have been started by June 2023. This is on the stipulation that it has been logged with the relevant body by June 2022, in order to qualify for the ‘transition arrangements’ part of the guidelines. This timetable has not been confirmed yet by the Ministry of Housing, Communities and Local Governments and therefore is subject to review. However, developers with projects in which each plot can be started by June 2023, should consider the many advantages that a development fuelled by LPG can offer.

In addition, Calor is committed to playing its part in the battle against climate change and are investing in a sustainable future. At Calor, we’re aiming to offer our customers 100% renewable energy solutions by 2040.

With this commitment to a low carbon future clear, Calor is hosting a series of webinars in October 2021 to offer advice and support to housing developers looking to build in an off-grid location. To register, simply contact contactcalor(Replace this parenthesis with the @ sign)calor.co.uk or enquire on www.calor.co.uk/business-energy/solution-for/developers 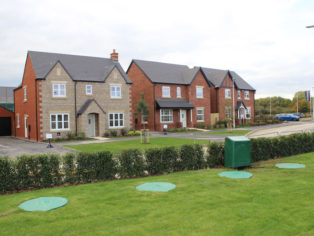