Alastair Stannah of Stannah Lift Distribution & Service (UK) answers some of the most frequently asked questions around the emergency use and upgrading of lifts in the housing sector.

Today, there are estimated to be more than 50,000 operational lifts in UK housing, and at least half of these lifts were installed more than 25 years ago.

Many tower blocks in the UK pre-date modern lift standards, which are in place to improve safety, so an appointed lift service provider should provide ongoing maintenance and give advice on upgrades.

How do passenger lifts typically work in the event of a fire or evacuation?

This behaviour of lifts in the event of a fire (BS 81-73) enables all lift passengers to evacuate the building and for fire-fighters to ensure there is no one trapped inside.

Can a lift be used as part of your building evacuation plans?

In general, no, it isn’t appropriate to use lifts when there is a fire. There’s the danger of people getting trapped in an immobilised lift, hence why a standard is in place.

It’s also true for platform lifts. Though they do not conform to the same standards, the concern remains of lift users becoming trapped between floors.

If the desire is to use a lift as part of an evacuation strategy, a thorough risk assessment and consultation with your lift service and insurance companies is required.

Are there any lifts you can use in the event of a fire? Or for evacuation?

There are certain types of passenger lift that can aid the fire and rescue service and emergency evacuation in the event of trouble.

These lifts operate as standard passenger lifts with the capability to switch into an emergency state if required.

As far back as the 1940s, the use of lifts with dedicated control features for firefighters was recognised in the UK and has been essential in high-rise buildings. We’ve had a standard for these lifts since the 1980s.

Modern fire-fighting lifts have additional protection, with controls that enable them to be used under the direct control of the fire and rescue service to contain and eventually quell a fire. British Standard EN81-72 compliant fire-fighting lifts feature:

In new housing, a fire-fighting lift is required if the building has a floor more than 18 metres above, or more than 10 metres below, the fire-service vehicle access level.

In some circumstances, a fire-fighting lift may be provided as part of a management plan for evacuating people. In such cases, the lift installation may need to be appropriately located and protected, e.g. refuge areas at landings.

Evacuation lifts can aid the fire and rescue service and emergency evacuation in the event of an emergency as part of an evacuation strategy.

They enable the use of the passenger lift by a designated warden to evacuate those less ambulant. Evacuation lifts comply with BS 81-76 lift regulations, with features requirements similar to fire-fighting, but excluding water protection.

Typically, they are larger capacity passenger lifts to evacuate disabled users, patients in beds or stretchers, e.g. in hospitals or large nursing homes.

Can an existing lift be upgraded to evacuation? Or fire-fighting?

For existing tower block lifts, where there is an emergency provision requirement, there is guidance on modernising in BS 8899: Improvement of fire-fighting and evacuation provisions in existing lifts.

Typically, the only way to tell if a lift upgrade is possible is with a site visit: to assess both the current lift specification and whether the building design will provide at least the level of protection and features necessary to protect the lift specified.

Due to the exacting requirements, there are often limitations that prevent full or even partial compliance. These can only be assessed on a case by case basis.

And other possible upgrade options?

Lift refurbishment can cover a range of improvements, from minor updates to significant repairs. Typical lift upgrades include:

As refurbishments and replacements are typically in occupied buildings, a lift company will work with property owners and tenants. Ensuring lift work is carried out safely, causes minimum disruption and providing a means of access for all building users – including temporary stairlifts to aid movement if required.

On average passenger lifts have a lifespan of 20-25 years so, eventually, the most economical solution will be complete removal and replacement. Again a site survey will establish what lift options are possible.

The proper maintenance, service and repair of existing lift stock plays an important role in enabling people to flow in apartment blocks. Not to mention that housing lifts are often in constant use! To prevent upset tenants, we’d always recommend regular and thorough lift inspections with 24hr service cover. 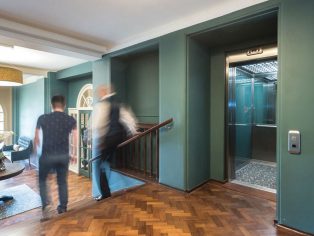