How can we protect communities from devastating floods while remaining connected to coasts, rivers and waterways?

Flooding is devastating. It destroys properties and can have a lasting impact on lives. Despite this risk, the majority of people enjoy being close to waterways. Access to rivers, canals and the coast is highly desirable, and can bring extra income to towns and cities through tourism. But with rising sea levels increasing the threat of flooding every year what can be done?

For too long we have relied on building giant physical barriers to protect our communities from flooding. But with sea levels forecast to rise by up to 10 inches by 2025, it’s increasingly being understood that we need to look beyond concrete to find inspiration.

At Arup, our experts are consulted upon for many major flood alleviation projects, and we are passionate about ensuring our designs and solutions help to shape a better world. By that we mean our projects always aim to truly consider the impact of the final project on all, and are not designed to suit just a few, or for ease of completion.

Architects and engineers are increasingly exploring natural flooding resilience. Natural management techniques are being considered to protect cities, towns and villages from flooding whilst preserving our important connection with rivers, estuaries and other waterways.

If flood risk assessments are done early, it is possible to shape the land and plan and design to minimise the risk, effectively ‘planning out’ flood risk at the start. Whether that be simply by planting more trees, or building low, naturalised dams across rivers to slow the flow, other options are there.

Our ancestors understood natural flooding resilience. During the 2007 floods, Tewkesbury Abbey famously found itself standing on an island. It was protected from the flood because the monks who built it more than 900 years ago had taken the time to study the local landscape carefully.

They had fully considered the natural environment and identified the best place to build the most valuable building in the community. It is a simple example of putting design first, sadly something which has too often been lost or not considered as our towns and cities have evolved.

Recently our team has completed a £50 million flood alleviation scheme in Leeds, West Yorkshire, to protect more than 3,000 homes and 500 businesses from the threat of flooding. During the design competition a number of groups advocated building large walls, creating a physical barrier between the river and city. Most likely this would have been effective in minimising the risk, but it would have severed the connection between the waterway and its community.

Our team of flood resilience engineers were committed to finding an alternative, sustainable solution. The result was the creation of moveable weirs, installed at points along the riverbed which can be lowered to reduce river levels when needed.

We also removed an island to improve the flow of water along this stretch of the river, lowering water levels in flood conditions by creating an additional area of flood water storage. Whilst some new walls have been required in areas alongside the riverside, these have included sections of glazed flood panels to ensure views haven’t been lost.

So, to answer the original question, with flood risk only set to increase as sea levels continue to rise, how do we protect the one in six properties identified as being at a risk of flooding in the UK whilst maintaining our access to the natural beauty of waterways?

Firstly, give people the time to think laterally, identify the flood protection systems which are required, and consider how they can be natural, and if possible, invisible.

It shows that with planning, feasibility studies, modelling and thorough research, long-term flood prevention methods can be found which don’t have a negative impact on our beautiful towns and cities, keep us connected to the water, and ultimately keep us safe.

When that happens it is true engineering and design success, but it is not something just those involved in flood alleviation schemes need to focus upon. That final result should be the first thought of architects when considering how to protect communities from that devastating impact of flooding. 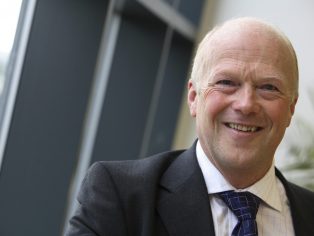 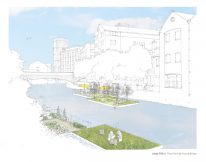 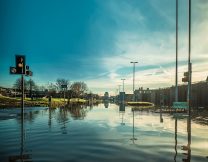