The former Acton Town Hall, in Ealing London Borough, has been partly converted to provide a public library and leisure facilities but the Grade II listed structure also now contains a range of apartments, some in a newly constructed infill site, but others occupying a carefully transformed original interior.

The prestigious building occupying a prominent corner site in the local town centre now provides more than 70 one, two, and three bedroom homes, many retaining period features from the original structure, including lofty 3.6 metre ceiling heights.

The building, which dates from 1909, was designed in an Italianate palazzo style, executed in locally made red bricks with Portland-stone dressings. It features tripartite sash windows on the ground and second floors and casement windows to the first floor. The ground and first-floor windows are set under heavy keystones and those on the first floor also have stone aprons. All the windows are set within stone surrounds.

For the refurbishment and conversion works the windows within the original building were replaced with Crittall Corporate W20 profiles. Timber subframes were installed with all these new windows as a planning requirement to ensure a like-for-like replacement. The subframe profiles were a bespoke item so as to match exactly the size and appearance of the original subframes. 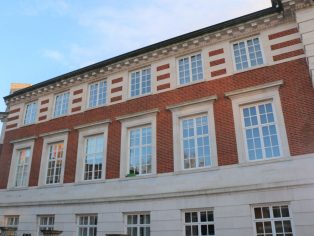