Increasingly, the human population is becoming more urbanised – and by the end of the century it is estimated that 7 billion will live in cities and towns. As cities become denser there is less space for ‘green infrastructure’ including parks, trees and other green spaces, which are vital for creating healthy cities and providing protection from climate change. So the need to explore new applications for green infrastructure within the built environment is imperative and our buildings provide a vast untapped potential.

The ‘building envelope’ refers to roof space, facades and any other areas that connect inside to outside, usually representing 20-25 per cent of a building’s total external area, so providing large underutilised surface areas within cities. Both new and existing buildings can be used to form green building envelopes and so provide significant space for green infrastructure which could be effective in limiting the depletion of green within cities.

The potential benefits that green envelopes can provide are compelling – reducing urban stress, mitigating noise, slowing down and storing stormwater, cooling down cities and decreasing energy consumption. By moving away from more traditional and inwardly focused performance considerations for buildings, and shifting our focus towards green envelopes, we can harness nature’s inherent ability to reduce the challenges of air and noise pollution and urban heat effects to create a positive, healthier and better quality of life for city residents, workers and visitors.

As we apply greater stress to our cities through increased urbanisation and climate change, we need to make our cities more liveable and resilient. Green building envelopes can help by providing space for horizontal and vertical green infrastructure that provides ‘softer’ benefits in terms of well-being, improved quality of life,  place-making, aesthetic enhancement and increased biodiversity.

Green infrastructure on roofs and walls that enhances the public realm has the potential to create new destinations where people congregate, turning harsh urban environments into something more natural without need for large open spaces.

They can also provide for urban agriculture and food production. Growing your own food has been shown to reduce obesity in adults by connecting people to healthy produce. Food miles are also a major contributor to pollution. Producing locally helps reduce pollution from food transport as well as connecting urbanites with their food.

When used appropriately, green facades and roofs can significantly improve the visual aesthetic of buildings and built infrastructure by helping them blend into the surroundings, or by giving the facade an uplift. Views and immersion in nature have been shown in studies to reduce stress in people. The symbolism of bringing nature into the built environment has many positive connotations making occupants think the environment is better.

Green roofs and walls help lower ambient temperatures. When placed below photovoltaic panels they can improve their running efficiency by helping to reduce their temperature. The lower ambient temperatures around green infrastructure can also be used as part of a free cooling strategy in summer. Capturing renewable energy using wind turbines and bio-reactive facades such as SolarLeaf in Hamburg, can drive sustainability in built-up environments.

Fine dust pollution generated by the traffic is now a major health issue in cities around the world. Green facades can result in local reduction in pollution of around 10-20 per cent as vegetation filters fine particles from the air. The principle concern are PM2.5 & PM10 levels which regularly exceed recommended levels by the World Health Organisation. Green infrastructure, when selected and placed appropriately, can reduce particulate matter levels by deposition on flora and subsequent precipitation and cleaning into drains.

Metropolitan hardscapes, such as concrete and glass, have a huge impact on the ambient temperature of the environment as solid surfaces radiate rather than absorb heat. This increased heat takes a toll on urban spaces, and can affect water quality, causing heat-related illnesses and an increase in mortality rates. The temperature in city centres is considerably warmer than surrounding suburbs and rural areas. This leads to overheating problems in summer, which will be further exacerbated by climate change.

Research shows that the quantity and quality of vegetation within a city can reduce temperatures and the Urban Heat Island effect. Green infrastructure used appropriately can reduce both surface and ambient temperatures. Retrofitting cityscapes with green infrastructure, such as moss walls and tree facades improves aesthetics, well-being, and the cooling potential of buildings. CapitaGreen in Singapore demonstrates how green building envelopes can reduce solar heat gain and lower surface temperatures. Even in the height of summer, interventions like vegetated roofs can help bring down the temperature to ambient levels, whereas a conventional roof can be up to 50 degrees hotter.

Residential developments are already showing how green facades can mitigate urban noise. While street canyons are typically made up of dense materials that reflect sound, green facades can absorb sound, reducing noise. In fact, our research finds that green building envelopes can reduce sound levels from emergent and traffic noise sources significantly. Green walls when selected and placed appropriately can reduce noise reverberation by up to 10 dB(A). Studies have also shown that people with views of nature have a lower perception of noise.

Surface runoff in cities is a major source of urban flooding. With climate change more intense, rain events are expected which will exacerbate this problem. Green roofs and walls used appropriately act as a buffer slowing down the speed that water travels into the drains from initial precipitation.

We call for architects, planners and the building industry not to consider green infrastructure as ‘green architectural decoration’ or ‘green fuzz’, but as an important and multifunctional aspect of our built environment, that can effectively be retrofitted to existing or integrated into the design of new buildings. This way, we can deliver significant improvements to the wellbeing of urban residents, workers, tenants and visitors now, and help cities build a legacy of resilience for the future.g

Cities Alive: Green Building Envelope, report produced by Arup shows how a collaborative team of Arup specialists from across the world, set out to tackle these issues head on. The report explores the application of green infrastructure to the surfaces of both new and existing inner-city buildings in five major global cities – Berlin, London, Los Angeles, Melbourne and Hong Kong – to create a positive future for inhabitants. The report is available as a free download from www.arup.com/greenbuildings. 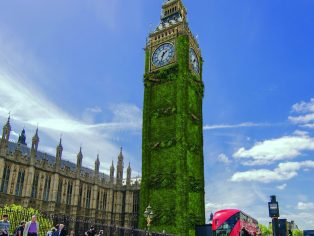