It took until he was retired for Ian Loader to be able to fully embrace his green ambitions. When he did, it was with the help and support of Graf UK.

For Graf UK’s Carat S rainwater harvesting system is a major element of the eco house Ian has created from a single-skin brick 1930s house that could not have been further from the green ethos.

The former sales director for a global commercial lighting manufacturer had been retired for six years when he and his wife Wendy downsized from a Grade II listed, five-bedroomed detached thatched house with outbuildings and extensive gardens in a village six miles outside Banbury to a four-bedroomed detached house 300 metres from Banbury Cross.

This much sought-after location was reflected in the purchase price so it would have been uneconomic to demolish and build a new house, so the two-year process of turning it into an exemplar eco house began under the stewardship of main contractor CJ Charles & Sons, whose MD Chris Charles had built his own new eco house. The challenge was to apply the same criteria to an old house.

As well as the Graf UK rainwater harvesting system, Ian’s low-energy design features include 120mm of internal wall and roof insulation, a bore hole ground source heat pump, 6.4kw photovoltaic panels on the roofs, triple glazing, a heat recovery ventilation system, LED lighting, a central vacuum system and a 13kw Tesla battery in the garage to store the PV generated energy. Electricity only is used for all services.

The Graf UK rainwater harvesting system was one of the first elements to be incorporated as it required a hole excavating in the front garden for the 4,800-litre Carat S ECO-Plus tank and then guttering on the house and garage to the tank, with ductwork from the tank to a small plant room which delivers the harvested rainwater to the washing machine, toilets and garden.

Ian had already found that Graf UK was coincidentally also based in Banbury and met company representatives in person at the BBC Countryfile Live show at Blenheim Palace in 2019.

“I did look at some other systems, but I wanted someone I could work with and the mix of German engineering with English standards of service impressed me. Graf’s prices were also very competitive.”

“We all have a responsibility to do something about the environment if we are able to, and luckily we were, because the Government can’t possibly provide all the incentives.”

The 2,280mm long Carat S ECO-Plus tank, which features patented filter technology and an in-house pump system with automatic switch-over to mains water supply, took two days to install into a prepared hole that was backfilled with gravel on a concrete base. The associated ductwork took a further two days, in the summer of 2019.

Ian and Wendy moved into their new eco house during a Covid lockdown in November 2020. Eight months later (July 2020) the tank is about half full.

“We don’t have enough data to measure its full effectiveness yet, but we are very pleased that the system appears to be working perfectly. I think the Graf tank is a fine example of what can be done in a modest urban environment.”

Preliminary consumption data from the water meter shows the household is using only 35 litres a day, which is substantially below the average for two people in a detached house.

They estimate they will be paying £550 a year for all their electricity and £300 for their water (which includes water disposal), which bears “no comparison” to their previous very energy-inefficient home. In addition, the heat pump installation qualifies for a Renewable Heat Incentive (RHI) payment over seven years that means the house will be more than cost neutral for the period of the payment.

Chris Charles said his company had installed many rainwater harvesting systems over the past 20 years and witnessed at first hand their evolution to being built off site and assembled on site.

“Graf’s system is much the same in a few easy kit form bits and is, in our opinion, now one of the best on the market. Graf staff are all pleasant and ready to help after a question is raised on site by the plumber or whoever needed guidance or could not follow the instructions due to circumstances on site. They were always ready to help.”

“At Ian’s house, it has been running for a year now, even before the clients moved in at the end of last year and has not given any problems.” 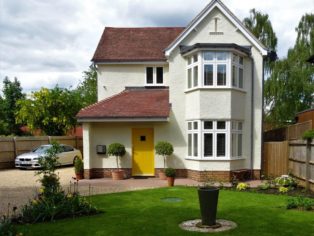 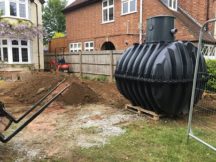 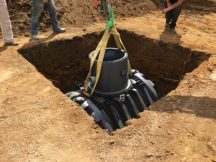