CaberDek is one of West Fraser’s flagship quality flooring products designed to ensure that, whatever weather befalls UK construction sites, work can continue cleanly and safely. This is especially important with today’s tighter than ever timelines. It is made from the same moisture-resistant particleboard as the standard CaberFloor P5 and features a protective non-slip film applied to its upper surface.

In most new-build projects, the upper floors of a residential property are installed before the roof goes on, with the inevitable result that the new floor is left open to the elements for days or even weeks. CaberDek’s protective film prevents rain and frost damage to the new floor surface as well as providing a safe non-slip working surface for the construction team. CaberDek can be left exposed, and remains BBA approved for up to 42 days without risk of damage, provided it is correctly installed with West Fraser’s CaberFix adhesives. Even after the building is weather-tight, the floor surface remains protected while following trades, such as plastering and painting, come onto site. When work has finished, the protective film is simply peeled off to reveal a pristine particleboard floor ready for covering.

CaberDek comes in easy-to-handle 2400mm x 600mm panels produced in thicknesses of 18mm and 22mm. Suitable for fixing to traditional sawn timber or engineered-timber joists, including metal-web joists, it can be fixed with nails, screws, and with West Fraser’s own specially-formulated adhesives.

West Fraser’s CaberFloor range is complemented by the CaberFix range of adhesives and tapes. The range consists of CaberFix T&G adhesive, CaberFix Joint&Joist adhesive and CaberFix Tape. CaberFix D3 is specially formulated to produce strong bonds between adjacent panels along the tongue-and-groove joint. CaberFix Joint&Joist is a high-strength polymer adhesive which remains flexible after curing and is designed to fix a CaberDek floor to the supporting joists.

Replacing mechanical fixings, CaberFix Joint&Joist speeds up installation and produces a floor which is guaranteed free of squeaks and creaks. Its flexibility also contributes to noise attenuation, thus aiding in the floor’s conformity with Part E of the Building Regulations governing the passage of noise.

CaberFix Tape seals the joints to prevent moisture degrading the T&G adhesives. For floors which are likely to be exposed to the elements during freezing conditions, West Fraser’s special CaberFix X-Treme tape is recommended. 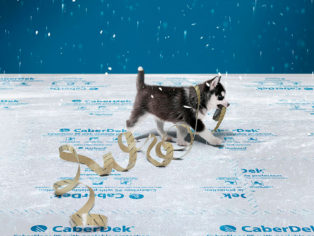 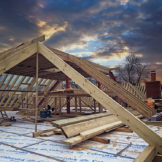