After extensive refurbishment The Salt House, a former Co-Op Hall, has now become the new home for worshipers of the Church of St Swithin’s, and Axis Mechanical & Electrical Consulting Engineers based in Nottingham, specified luminaires from Luceco. Located in Lincoln, St Swithin’s Church could no longer be used for services due to its state of repair, so an alternative building was sought. The Salt House is located directly opposite the church and has now been converted into a community church complete with a café and social hub for charities and social enterprises. The principal luminaires specified included suspended LuxFrame fittings, Ice Linear and recessed Platinum downlighters.

Dimmable 3000K suspended LuxFrame luminaires were used in the main area. LuxFrame is a minimalist LED luminaire designed for ceiling grid applications or suspended as a pendant luminaire as at Salt House, enabling the creation of imaginative and contemporary lighting designs. Office and administration areas were lit with Ice Linear. Contemporary and stylish, Ice Linear is a transparent optic pendant luminaire providing both upward and downward light distribution. Supplied complete with adjustable wire suspensions, Ice Linear delivers an enhanced lit effect, the sleek transparent design complements modern interiors even when turned off.

IP rated LuxPanels were installed in the Kitchen with Surface and Recessed Platinum 3000K luminaires fitted in the servery and reception areas. Platinum Mini along with Element downlighters were used in WCs. Platinum is a high performance 220mm diameter downlight with an efficacy up to 130 Llm/cW, featuring a unique swing tab design ensuring installation is quick and easy. The Surface Mount format provides an opportunity for creative lighting design using a high specification luminaire where a recessed ceiling void is not available. Platinum Surface Mount can be used as a pendant with suspension wires, or BESA fixed directly onto a solid surface. Recent enhancements to the recessed Platinum include a further optimised heatsink and a reduction in bezel thickness from 6mm to 2.5mm on a standard IP44 bezel as well as being magnetic.

As well as being a retail outlet for the Co-Op and a former nightclub, The Salt House is also referenced in the history of the immediate area of the city where salt was once warehoused for distribution. Now a contemporary Church and community hub, The Salt House will be the new home for over 450 members of Glorious St Swithin’s! 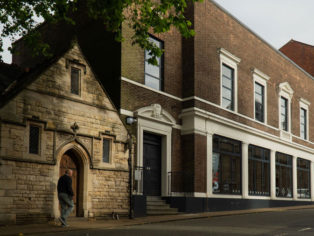