The ventilation strategy designed by Gilberts (Blackpool) has already proved its capability to deliver on massively-varying requirements for the ‘ground-breaking’ 143m high Manhattan Loft Gardens in the heart of London.

Within days of the 42-storey mixed use tower opening, temperatures outside reached 30°C in the shade, yet inside guests felt cool and fresh, whether in the restaurant, guest rooms, bar or the lofty mezzanine space.

“The engineers (Skidmore Owings & Merrill) describe the construction of the tower as a balancing act, with sections “cut out” and cantilever design keeping the whole concrete & steel structure supported. It’s a good description of the ventilation strategy too: we had to design a combination of grilles and diffusers that met the high aesthetics demands of the project, yet could deliver the performance required, and be fitted in sometimes very challenging locations.”

Gilberts was commissioned by Foreman Roberts building services consultant on behalf of ISG to develop a strategy for delivery of an energy-efficient air movement programme. Thus Gilberts provided the grilles and diffusers for the whole six-storey five star hotel – The Stratford – at the base of the tower, and the restaurant on the seventh floor.

The building has achieved a BREEAM ‘outstanding’ rating.

In developing the solution, Gilberts had to address, among other constraints:

The company’s in-house R&D capability and manufacturing expertise enabled bespoke variations to be quickly designed, developed, and tested to prove delivery and maintenance of the required indoor air temperatures and quality.

In the high level mezzanine, Gilberts Series GSJ thermally adjustable circular swirl diffusers were used. The stand-alone solution adjusts air flow across the ceiling depending on the internal temperature, giving an even spread of fresh, cool air within the space without cold spots or cold air ‘dumping’.

In the restaurant which occupies the entire seventh floor, the only area available to serve fresh air into the space was via the ceiling on one side of the building, yet that fresh air had to permeate the whole area, without draughts. Gilberts’ Series GSL linear slot diffuser in eight-slot variant delivered the air volumes required and met the aesthetic demands.

In the guest rooms, air supply and extract was through the bulkhead, the design of which gave no potential for face fixing. Gilberts developed a bespoke version of its Series L with a removable core and a new attachment method so the face of the grille would remain securely in place.

In the bar and open areas, Gilberts’ Series L linear bar grille was engineered with a narrow border and 15degree angle blade to fit discreetly into the shadow gap, and provide airflow around the lip in front of the grille.

“We were delighted with Gilberts’ performance throughout. They spend countless hours selecting the appropriate grilles, that delivered the high performance and aesthetics needed, and developed bespoke solutions where necessary. Even when external temperatures exceeded the norm, the grilles did their job.”

Founded 55 years ago, Gilberts Blackpool is Britain’s leading independent air movement specialist, and is unique in its ability to develop components, be it ‘mainstream’ or bespoke – entirely in-house, from initial design through tooling, production, testing and supply, at its 85,000 ft2 manufacturing facility. Its state of the art test centre, designed and built in-house, is one of the most technically advanced in the country. 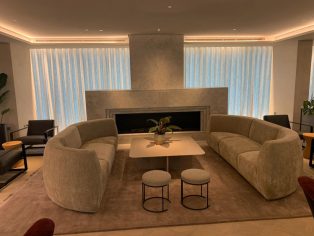