With cities’ night time economy being seen as increasingly important in the future, Tim Foster, partner at Foster Wilson Architects, reflects on how theatre design projects that put placemaking at their core can catalyse regeneration.

Following the debate around placemaking in recent years it is apparent that the term means many different things to differ- ent people. Local community activists believe it is about community participation and the making of places in which people have ownership, while property people believe it is about creating a congenial environment which will attract people to their develop- ments, making them easier to sell or rent for a good return: the reality probably lies somewhere in between.

As quoted in a recent article in The Guardian, the US academic Richard Florida – considered to be the guru of placemaking – told the mayors of major American cities in 2002 that attracting ‘hipsters’ to their towns was crucial. “Don’t waste money on stadi- ums and concert halls, or luring big companies with tax breaks. Instead, make your town a place where hipsters want to be, with a vibrant arts and music scene and a lively cafe culture. Embrace the ‘three T’s’ of technology, talent and tolerance, and the ‘creative class’ will come flocking.”

This is really the same cycle that Jane Jacobs described in her seminal work ‘The Death and Life of Great American Cities’, published in 1961, whereby districts fall into decay, the artists move in attracted by the cheap rents, the hipsters and coffee shops follow, the area regenerates, forcing the rents back up and the artists and original residents to move on. You only have to look at certain areas of London, like Shoreditch and Dalston, to see this gentrification process in action. There are obvious winners, mainly the early adopters, but there are also losers, particularly the low paid service workers who can no longer afford to live in the place where they have their roots.

So despite the casualties, placemaking as a catalyst for regenera- tion is here to stay, and most policymakers, now understand the benefits. There is also a growing consensus that cultural facilities, be they art galleries, music venues or theatres, have an important part to play in making places where people want to be. Generally, these facilities need to arise organically and are not imposed from outside. There are many examples of how small independent theatres, particularly in London, have contributed to the regenera- tion of their areas, such as The Tricycle in Kilburn, The Almeida in Islington and The Arcola in Dalston. They now occupy thriving high streets, which are almost unrecognisable from what they were 20 years ago.

It is worth considering the economic impact that theatres can have on the night-time economy. Take for example the data published by

The Society of London Theatres, who represent commercial theatre owners, which showed that in 2016, West End theatres had a gross revenue of £644m, VAT receipts of £107m, 14 million attendances and 76 per cent of seats filled. The London Theatre Report of 2014, which surveyed all theatres, both commercial and not-for- profit, found there were 241 theatres in London with 110,000 seats, 22 million attendances a year and nearly 20,000 people employed by theatres.

This is a lot of people generating a lot of footfall, who not only go to the theatre but also use transportation, restaurants and shops and visit other attractions. The West End of London is an extreme and unique example, but the same principles apply in any urban centre with a vibrant night-time economy, where cultural facilities are an important driver. In 2013 the Local Government Association published a report on how investment in arts and culture affects local economies, identifying five key impacts: attracting visitors, creating jobs, attracting businesses, revitalising places and develop- ing talent.

With such evidence, the role of cultural facilities in driving wellbeing, regeneration and local economies is undeniable, but how are the different players in the development cycle responding?

It is worth noting that The National Planning Policy Framework of 2012 requires local authorities to prepare local plans which support cultural wellbeing and deliver sufficient community and cultural facilities to meet local needs. This was not included in the original draft, and it was only because of a campaign led by the national advisory public body for theatres, the Theatres Trust, that any reference to culture was included at all. However it is there now and local authorities should be pressed to act on it. Some local authorities do understand the community and commercial benefits that a cultural plan can bring, but not all.

My practice, Foster Wilson Architects, is involved in two local authority-led projects for cultural buildings as part of larger regen- eration projects. The Ovalhouse in Brixton is part of a large housing development led by Lambeth Council to provide a new home for an established theatre, create much needed cultural facili- ties in central Brixton, and help boost the night time economy. In Taunton we are looking at the enlargement of the existing Brewhouse Theatre and Arts Centre, a council-led regeneration project to create a cultural quarter in the centre of the town, which has been designated by the Government as a Garden Town. Both these projects show how local authorities are prioritising support- ing their existing cultural organisations, while at the same time serving a wider regeneration agenda designed to add value and create places which people actually want to live in.

It is not just local authorities that are recognising the positive economic impact of theatres. There is a growing trend for develop- ers to provide new cultural facilities or support existing ones as part of their plans. This is happening for a variety of reasons, which may include a requirement to replace an existing theatre, a demand for community benefit under a Section 106 agreement, or a straightforward commercial judgement about the contribution theatres make to the vibrancy of a neighbourhood.

For example, The St James Theatre, now renamed The Other Palace, replaced the old Westminster Theatre, which was previously on the site, providing a new theatre with residential development above. The new Bridge Theatre at One Tower Bridge forms part of a large development by Berkeley Homes and occupies an area origi- nally designated as ‘cultural space’, although neither the local authority nor the developer knew quite what that meant when the original planning approval was granted. At the Regents Place devel- opment, British Land have lent their support to the existing New Diorama Theatre because they understand its importance in creat- ing a cohesive community.

At a time when funding for theatres is increasingly hard to come by, the financial support of developers is to be welcomed, but needs to be handled with care to make sure they meet their obligations – and planning authorities have an important role to play in ensuring this happens.

Another growing trend, which theatres are increasingly embracing, is the creation of open, welcoming democratic foyer spaces, which are open to all in the daytime, and engage with the public realm. The traditional model of theatres that open their doors an hour before the performance and close them again after it finishes is rapidly disappearing.

While many theatres have been open all day for many years, the transformative development is the digital economy, where increas- ing numbers of people work online and do not need to be in conventional offices. Theatre foyers can be an ideal place to hang out, to work and to have meetings, provided there is the all-impor- tant wi-fi connection and good food and drink available. Obviously the location needs to be convenient and the design of the frontage as open and permeable as possible, but these are characteristics most theatres have anyway.

The most obvious example of this trend is the use of the foyers at The National Theatre and Southbank Centre in London, which are so full of people with laptops they are starting to be overwhelmed. This is a nice problem to have. It brings people into the building, who might otherwise not come in, and can generate a valuable income stream from the sale of food and drinks, as a well as creat- ing a sense of place.

Most theatres do much more than putting on performances, and community engagement is an important part of what they do. This may include school visits, drama workshops, dance classes, yoga and pilates. An interesting recent project, The Storyhouse in Chester, combines a new theatre with a public library, which brings a whole extra level of community engagement to the building, ensuring it is full of life all day long.

I think it is worth highlighting that theatre people are remarkably good at creating theatre quickly and with very few resources. They are in the business of making performances, which are ephemeral – here today and gone tomorrow. This is the antithesis of conven- tional architecture, which is by definition permanent, so if you want a pop-up performance or an interesting ‘meanwhile’ use to help generate activity, then there is no one better to help you do it.

In conclusion, theatre buildings play a vital role in the economic and cultural wellbeing of communities and are key drivers of
the local economy, the impact of which is often far greater than their modest means – if that isn’t placemaking, I don’t know what is. 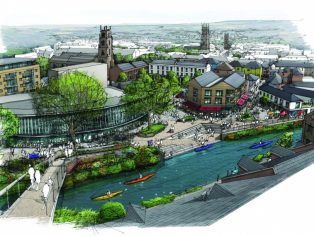 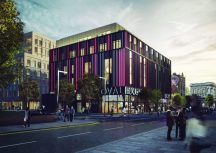