Wimshurst Pelleriti, the architects behind a renovation and extension of a historic office building in London, explain how the practice pushed for a modern addition, rather than a proposed ‘pastiche’. Jack Wooler speaks to Leo Pelleriti

In a compact site in central Richmond, London, a historic building has been revitalised and extended by architects Wimshurst Pelleriti (WP).

With the project being located in the heart of a conservation area and being surrounded by historic properties, many of which are listed, the project required a sensitive approach.

According to Leo Pelleriti, co-founder of WP, however, the practice wanted to avoid creating a “pastiche” of history, and instead intended to create something that – while still conscious of its surroundings – would provide a modern addition to the site.

In order to achieve this and meet the aims of the client, CBRE Global Investors, WP submitted plans for a “carefully detailed” glass extension on the ground floor where there was no impact on the conservation area, a “more sensitive” approach to the roof extension which overlooks and can be seen from surrounding properties, and a new second floor constructed in the place of an existing plant area.

Planning was approved within five months, and the building now stands completed, 15 months after the permission was granted.

Opportunities
Being based locally in west London, Leo and the practice were advising CBRE Global on their commercial properties in Richmond when Indigo House came into the picture.

Leo says: “They had been trying to redevelop this site in particular for a few years to upgrade its quality and spaces, but for some reason, they failed.

“After visiting the site, we started looking at potential opportunities for development, and we came up with a number of different options and extensions – which eventually led to the final design which stands today.”

The building was erected between 1960 and 1978. From 1909-1911 until then there were different buildings used as a stable yard and a motor garage, Holbrook Motor Works.

In 2015, the owners got planning for change of use to residential. This application was never implemented however, and in 2016 the owners decided to renovate the building and increase its value – with commercial use being the chosen route to take.

As such, after a few failed proposals from other practices, WP were brought in to create a new planning application that would make better use of the site – and achieve what others couldn’t.

Applications
Achieving planning was no easy task, largely due to the complexity generated by the building’s neighbours.

Leo describes the process: “We spent quite a bit of time in planning because of the location – being surrounded by Grade II listed buildings meant it was quite challenging in terms of matching the heritage and local design.

“We started engaging with the officers and held a couple of pre-application meetings to discuss the quality we were proposing, and how we wanted to improve the site – it’s a beautiful location in a sort of mews courtyard, but the hard landscaping was in a very poor condition.”

The architect believed the building “needed some love” – Leo says the previous architects’ design proposals were a “poor pastiche,” which would have resulted in a pseudo-historical building.

“We wanted to walk away from that principle,” he continues. “We want people to know it’s got a huge heritage value, but we didn’t want to propose imitation design.”

They submitted two new planning applications for the building – one for the ground floor extension to the rear of the building, which was reportedly “low-risk” in the architects’ view due to its simplicity and modernity – and then a separate application for the roof extension.

Through engagement with local consultees and Richmond’s conservation team, WP demonstrated that the plans for both the proposed extensions would not reduce privacy, block out light, or impact the historic nature of the surrounding properties – as such, the application was approved. Though achieved in a relatively short time frame, getting through planning was the “main challenge,” says Leo.

“After that,” he continues, “the whole construction process was really enjoyable – all the contractors, everyone, stuck to the programme, on time and on budget, which was amazing.”

Leo adds: “We had a very good team of consultants, as well as a very strong and detailed construction package. When we went into tender we interviewed three contractors with a strong cost plan – we didn’t just select the cheapest, we selected the one that was going to deliver what we wanted.”

Flexibility
When first entering the site, Leo was immediately struck by the main deficiencies of the project – each of which the architects planned to not just address, but future-proof as much as possible, so that it could be flexible enough to be used by single or multiple tenants.

“We started by seeing how we could integrate the main services and toilets so that it wouldn’t need to be changed for differing tenant types over the next 10, 15, even 20 years,” says Leo. “We created an open plan office space on the ground floor, with a reception area and a central entrance, and then moved the workspaces, services and toilets around so multiple tenants could be accommodated if necessary.”

Furthering this flexibility, they included two separate entrances into the ground floor – one by the reception, and one by the terrace off the other floors. The first floor was also entirely renovated, with an open plan office space installed.

The existing building terminated at these two floors, except for a volume above for plant. Leo explains the plans for this area: “We wanted to use that as an additional office space, and so we went with a very modern glass box extension to the roof to accommodate this. Throughout the negotiations with the planners, there was discussion about making it extremely modern, or trying to mitigate the impact to the conservation area.”

As such, this plant area was removed, and replaced with more efficient plant provision throughout the building – the roof space then being extended with an additional office space.

External improvements
With the building now completed, users can head through the mews into the central courtyard – shared by Indigo House, a residential building, and another office – and are greeted with a completely revitalised design inside and out.

In terms of the outside, one of the major improvements to the external envelope was the removal of all the old single glazed windows, to be replaced with double glazed timber sash windows. This allowed for the retention of the existing external brickwork, which was integral to the building’s heritage.

“Then, as a complement to what was already existing,” adds Leo, “we added the glass box.”

This frameless glass volume protrudes from the ground floor, resting underneath a green roof. The box was intended to bring far more natural light into the building, while avoiding obstruction of the ground floor plan – “providing a nice contrast between old and new.”

The new second floor features zinc cladding and dormer windows. According to Leo, this allows them to blend with the character of the surrounding properties – which at this height was particularly important, so as not to diminish neighbours’ views.

Alongside these elements, the team also improved the surrounding area – upgrading the soft and hard landscaping around the scheme, which, the architect tells ADF, made “a big contribution to its quality.”

Exposure
When users enter inside this completed building, they are now presented with a refurbished interior design in a “light-industrial” style, featuring what Leo describes as a “minimalist palette,” including an exposed structure, exposed brickwork, exposed services, and timber flooring throughout.

One of the main improvements the architects were able to make in the interior design, to add this industrial feel, was in using the space gained from removing the old suspended ceilings.

Such suspended ceilings are often reminiscent of mid-20th-century office spaces, and exposing the steel structure of the building and services provided part of the look the architects and client desired. But, it wasn’t all aesthetics; according to Leo, the raised ceiling heights also allowed for more daylighting inside, and of course gave a much greater feeling of spaciousness.

The architect explains the design intent further: “We wanted to keep this idea of a historic mews site, which was semi-industrial, and to bring in the feel of a warehouse.”

Performance
When it came to the finished building’s performance, the building achieved BREEAM Very Good, largely through the upgrades made to the external envelope such as windows, as well as through an efficient energy system installed on the roof, which provides hot and cool air into the building through mechanical ventilation.

“The BREEAM rating is great for this kind of building,” says Leo, “and the EPC was also vastly improved,” with the building’s ongoing CO2 emissions having been lowered as a result.

Transformed
The building, now transformed, has a vastly improved character and quality – which reportedly has added the strongest appeal to potential tenants – but also “considerable” additional floor space, all without compromising the conservation area that surrounds it.

“After the long journey through planning, we really got what us and the clients wanted – which in the end was largely to increase space.”

According to the architect, the reaction from those around it has also been “excellent.” He says: “Even the neighbours who share the courtyard, they’ve told me they ‘can’t believe what we’ve done here.’”

The architect tells me that one group was so impressed with the office’s finish, that they went looking for the practice behind it, and have recently contracted WP on a similar development.

“All in all, the project has been a real success,” Leo concludes. 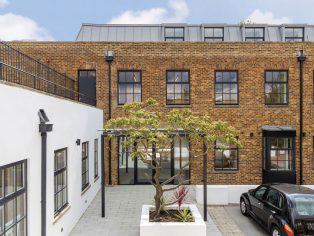 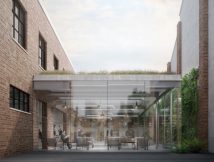 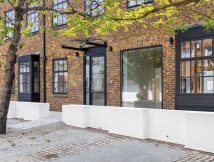 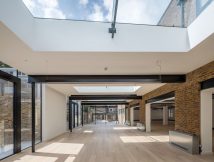 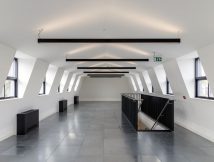 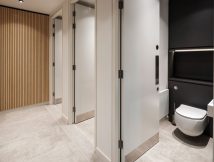