The increasing number of agencies involved in the flatshare market is pushing up rental prices, according to EasyRoommate.

The flatshare and roommate website used its data to determine rent prices had climbed by nearly 30% compared to the first quarter of 2015.

Other trend revealed flatmates had an increased rental budget of £575 – matching with rent prices demanded.

“Obviously UK flatsharers are savvy people. They have shown that they can adapt quickly to the whims of the market, meeting the rent price expectations as they go up.

“The higher rent expectations of UK flatmates might also be linked to their growing age and the fact that more and more are professionals, earning bigger incomes and able to spend more.

The rental market is getting increasingly unfavourable to vulnerable populations that are pushed out of big cities, and especially out of London.”

According to the research, UK roommates’ average age is now 28, a 0.5 years more compared to the first quarter of 2015. The share of flatmates over 40 has grown by 13% since 2012, proving that flatsharing has become a durable trend of British accommodation.

The majority of flatmates are professionals, climbing to 61% from 56% in the first quarter 2015. 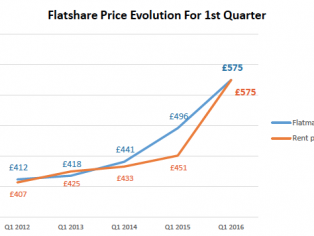