The announcement was made at an awards ceremony at The Brewery on Chiswell Street in London, on November 3 where more than 500 industry professionals gathered for the facilities management event of the year.

“We are absolutely delighted to have won this award which underlines our commitment to environmental and sustainability issues.”

Designer Contracts and Texfelt have an exclusive arrangement to sell a unique, fully recyclable underlay made from single use plastic bottles to the new build sector. To date Designer Contracts has diverted over 750,000 bottles from the environment through sales of Texfelt’s ground-breaking SpringBond underlay.

SpringBond has the potential to save the equivalent of 1,000 500ml PET plastic bottles from polluting the oceans and environment if used throughout an average three-bedroom house.

Judges said the partnership had proved extremely effective in having a highly positive effective on the environment through the reduction of plastic waste by re-purposing it.

“The award is a testament to the success of our partnership with Texfelt – and the efforts of the team at Designer Contracts in rolling out Springbond to the new build sector where home buyers are becoming increasingly aware of their impact on the environment.”

Managing director, Peter Kelsey, was himself was honoured in September with an Outstanding Achievement in the Flooring Industry award. It was made at the Contract Flooring Journal’s 2021 awards ceremony where he was described as a “giant of the UK flooring industry”.

Texfelt is a family run business, based in Bradford, with a 160 year history of working in the textiles industry. Today it upcycles fibres derived from single use plastics and textiles, to create innovative new products for the home that can be fully recycled. SpringBond is manufactured using Texfelt’s unique Kytech manufacturing process, serving the flooring, furniture and bedding markets. To date it has saved some 18 million plastic bottles from going into the oceans and polluting the environment. 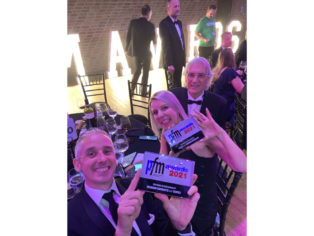