Challenged by steep topography, unspoilt alpine surroundings, and a devastating fire after its initial construction, the creation of a community sports and activity hall brought architect, client and locals together in the Swiss village of Le Vaud. Sébastien Reed speaks to architect Laurent Saurer

Situated just a stone’s throw away from Lake Léman on one side, hugging the French border, and the Swiss Jura on the other, the village of Le Vaud is shrouded in natural beauty. It was this setting that predicted the commune’s requirement for, above all, a sensitively packaged solution to its intensifying shortcomings in public amenity space. In 2013, the commune’s local government opened the project up to competitive tender, paving the way for Lausanne and Zurich-based practice LOCALARCHITECTURE’s first contact with the client. In addition to demands for additional space, the commune also wanted the design to make use of as many locally available materials as possible.

Beyond that, entries were relatively free to experiment, explains Saurer: “Because it was a competition, they gave us a very small brief. We were very free to create something new and feel free, so each of the six projects submitted were very different.” He continues: “The question of integration was key, though.” According to the architect, it was the studio’s sensitive design and placement of the project into site and surroundings that secured their selection to lead the design. What distinguishes Le Vaud’s new building from other villages is its unique story. Following initial completion in 2016 and one month before the building’s opening, Le Vaud’s Polyvalent Hall was entirely destroyed by a calamitous fire. While the event was a huge blow, it served to bring the architects, client – in particular Chantal Landeiro, president of the commune – and the local inhabitants, closer together. As a result of this, the architects gained a more profound understanding of the client’s needs; essential to further fine-tuning certain aspects of the design for the rebuild.

The plot is situated adjacent to a path which also provides access to the neighbouring village church and cemetery to the west and a school sports field to the north. A concrete forecourt acts as a visual marker for the hall’s entrance, and buffer to the road. Further removed are smaller residential units, largely in concord with the rural architectural language in that part of the world. In plan, the building takes on a near rectangular shape measuring roughly 36 metres by 40 metres, however the eastern side of the building is marginally longer at both ends, forming a trapezium.

The simple plan is balanced by the hall’s relatively complex form characterised by two pitched roofs of varying height and width made up of seven planes which, according to the architects, make the scale of the building appear “ambiguous and abstract”. A chimney structure also protrudes from the roof, nodding to the cottage typologies found in the region. “Questions of form were very important,” says Saurer. In terms of scale, the architects wanted the building to be “something within the measure of a child.” It was important that the building’s mass were restrained; firstly, to better integrate it into the village, which is made up of small buildings, and secondly, so it wouldn’t appear intimidating to the younger demographic that make up a significant portion of users. The team was also keen for the building to react to the nearby mountains, and decided to orient the rooflines in parallel with the topography. The result “looks, in a way, like part of the landscape,” remarks Saurer.

Drawing lines between the new hall and its context and as part of the client’s brief, the architects specified only local materials for Le Vaud’s new hall, with its exterior shrouded primarily in agricultural steel, like that used for farmhouses and agricultural buildings throughout the Swiss Jura. Triangular sections of slatted pine appear to sprout up from the building’s east and west elevations, providing a shading system to the triangular window beneath, while the same slatted timber frames expanses of glazing recessed into the mass of the building right across the north and south elevations. Here, far-reaching views of the Jura mountains to the north, and Mont Blanc to the south are captured for users.

“The interior works with the topography, too,” says Saurer, “with some rooms hidden underground.” The concrete forecourt doubles up as the roof slab of some of the accommodation on the lower ground floor of the building, housing numerous amenities such as lavatories, plant, small function rooms, a kitchen area, and storage areas for chairs, tables, and other equipment. Set adjacently to the south of these dug-out spaces, the multifunctional sports hall is situated on the same floor.

A stage is built into the body of the western wall to provide the necessary facilities for locals to enjoy live spectacles. An upper ground floor level acts as a balcony area spanning 18 metres by 16 metres which overlooks the hall from the northern side, as well as functioning as an entrance lobby for the entire building. Users can move easily between floors via a staircase on the north eastern side of the plan, providing access to the storage and plant rooms below. Structurally, the hall’s mass is supported by the load-bearing walls of the roof gables which allowed the architects to keep as much interior space as possible unobstructed. Aside from a minimal two-beam truss at the central ridge between the two pitched roofs, the interior is completely open plan. “You can walk 40 metres without encountering any pillars,” remarks Saurer. In order to accommodate the various sporting activities and events programmed for the hall, the form of the interior shell deliberately diverges from that of the external envelope. Saurer explains: “Whereas the exterior reacts to the natural and built context, we designed the interior to best fit the norms of many different sports and activities.”

The studio also worked in close collaboration with lighting designer Etienne Gillabert, who was particularly invested in minimising the clutter when it came to light fittings. “A traditional multipurpose hall would have a large light on the ceiling, but in this project,” says Saurer, “we gathered all the lights to the main beam to emphasise the structure and offer a kind of purity.” 80 spots, one every square metre, form a lighting grid which evenly illuminates the hall. Natural ventilation services the large spaces through hand-operable windows and openings on the north and south elevations which are situated to align with the prevailing winds in the region, while the smaller rooms on the lower ground floor benefit from mechanical ventilation.

With one of the client’s requests being to incorporate as much local material into the construction as possible, the architects had only to look to the nearby alpine region for inspiration. “White pine is a very well-known Jura wood,” explains Saurer, “it’s very resistant and often used by farmers, so it was very natural to use in this context.” Timber elements on the outside are treated with Lasure varnish, which will allow the wood’s hue to fade gradually as it ages. “Currently,” says Saurer, “the exterior timber is a light orange colour, but the wood will eventually fade to grey, which will compliment the grey and black steel plate material on the rest of the building. It’s the natural life of the wood.” White pine is used almost exclusively throughout the interior, constituting both the walls and ceilings. The wood is treated with a UV protective solution on the inside, helping maintain the wood’s bright colour and keeping the internal spaces light-filled naturally.

Also conscious of the noise expected from large swathes of children playing and the hosting of local functions, keeping acoustics under control was also a priority for the design team who, in response, specified a lightweight timber solution – Lignatur. The prefabricated Lignatur elements incorporate cavities and perforations which not only provide acoustic treatment for the hall, but structure and thermal insulation too, all the while cutting down on the amount of material required due to their hollow design. The result, in Saurer’s words: “You don’t get the impression of being in a sports hall. It’s more like a traditional stable, transformed into a contemporary object.” The primary sustainability benefit of using white pine comes from the reduced transportation costs that go hand in hand with specifying locally sourced materials. Naturally, the white pine also locks in significantly more carbon compared to some other choices, a contributing factor to the scheme’s Passivhaus certification. “We think that every building should be very well insulated and should correspond to certifications,” says Saurer.

Setting aside the fire that ravaged the first construction in July 2016 and the soul-searching that followed, Saurer says the most difficult part of the project “was the installation of the main beam over the sports hall.” The U-shaped ridge beam of the main hall incorporates all the technical equipment required for sports activities such as rings, movable basketball hoops, and lighting, which leaves the hall ceiling free from any visible technology. Between these main beams, secondary structures made of Lignatur panels support the roof. Because of the size of the main beam – measuring 2 metres thick and 40 metres long, it also had to be split in two for transportation purposes, then reassembled on site.

The completed project has been awarded the Swiss award Distinction Romande d’Architecture 2019 and the 2019 International Wood Prize, as well as receiving an honourable mention by Prix Lignum, a Swiss co-operative promoting innovation in timber design. Notwithstanding industry accolades, for the client and Le Vaud itself, its Polyvalent Hall will have a far greater impact as a place where the community gathers and innumerable beneficial experiences are had. When building the second time round, only minor changes to internal fixtures were made, making the end product and the original design submission very similar. When asked if he would change anything about the final design, Saurer responds with a resounding “no.” He expands: “In a way, we’ve had the luck to do this twice. I think the project is incredible.” 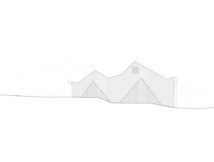 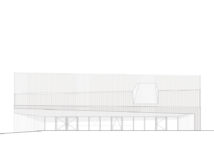 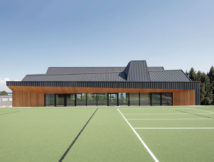 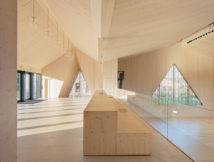 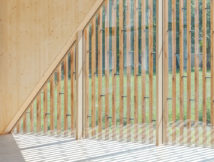 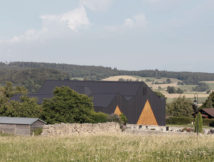