Buying into the concept

Wanting to be part of the self-build hotspot that is Graven Hill, Dheeraj and Taniya Malik found a building system that they liked so much, they set up a business based around it

Dheeraj Malik could be speaking for all self-builders when he explains why he and wife Taniya decided to take on the challenge of creating their new home from scratch: “We wanted to build a house that we could customise to suit our lifestyle, rather than settle for someone else’s idea of how a house should be and make our lives fit around that.”

Like so many before them, the couple were brave enough to take on and overcome the challenge of self-building with no previous experience – and now they and their two children are enjoying the rewards of living in a stunning three-storey, five-bedroom detached home in Oxfordshire.

To help them achieve their dream, they joined the growing number of people who have been drawn to the unique self-build experiment that is Graven Hill, near the town of Bicester.

The project began when Cherwell District Council bought 188 hectares of land from the Ministry of Defence with the aim of creating the UK’s first self-built and custom-built town. Up to 1,900 new homes will spring up there over the next 10 years, surrounded by open, green spaces including woodland, allotments and a network of cycle and footpaths.

So bold is the idea that the very first Graven Hill plots to be developed starred last year in a Channel 4 TV show (Grand Designs: The Street), fronted by Kevin McCloud. The Maliks had already decided in the summer of 2017 – long before that show hit the small screen – that they wanted to be part of the Graven Hill experiment. Dheeraj says: “We were living in Slough in a townhouse, but we wanted a home where we could easily entertain family and friends. We’d always wanted to self-build but to have what we wanted – open-plan space, high ceilings and a little more countryside on our doorstep – we knew we needed to get ‘more bang for our buck’ in the housing market. That’s part of the reason for moving along the M40 and further away from London. Graven Hill seemed a golden opportunity.”

Another key driver was the so-called ‘plot passport’ system that’s operated by Graven Hill Village Development Company Limited (owned by Cherwell District Council). In short, self-builders can design the home they want and get planning permission within just 28 days – so long as they abide by some agreed parameters for the plot they choose. This includes the total size of the plot, maximum gross internal area (or floorspace), maximum building height, a palette of building materials and how main services are provided.

Dheeraj says: “The beauty is there’s very little design restriction. There are some checks and balances – you still want a residential housing feel rather than something that looks like a Disney theme park – but otherwise the house can be any style or shape.”

The Maliks took a plot with a gross internal area of 291 m2 and a build volume of 400 m2. The maximum height allowed was 11.1 metres, but at its highest point the building is actually 10 metres tall. From the external materials palette for their street, the Maliks chose a mix of white render and a strikingly attractive manufactured stone veneer imported from California – a concrete mixture cast in flexible moulds and hand-coloured with iron oxide pigments.

Where the roof is pitched, they opted for Brazilian slate tiles and a reinforced elastomeric polymer-bitumen waterproofing membrane where it is flat. Double glazing features throughout with a thermal efficiency value of 0.9U, exceeding the minimum standard set in the Maliks’ ‘plot passport.’

Dheeraj wouldn’t reveal how much he paid for the plot except to say it was a “competitive” price, but adds that another attractive part of the deal was the ‘golden brick’ approach offered regarding the foundations. “Foundations can be a nightmare because you don’t know what you’re going to find until you dig. But the Graven Hill team will assess ground conditions and give you a fixed fee for the foundation work, regardless of what they might later find. After all, it is a former MOD site!”

The design of the house itself is mostly all Dheeraj’s own work. His job in the financial services sector doesn’t seem to be ideal preparation for such a challenge, but, he reveals, “Before I came to the UK I did start my working life as a graphic designer back in India, so maybe this house has been a way for me to channel my creative side.”

He continues: “I made a 3D polystyrene model of how I wanted the house to be designed. Of course, I didn’t know anything about making it structurally sound – I went to the professionals about that – but the finished house looks exactly the same as that model.”

One of those professionals was architectural designer David Paynter, recommended because of his experience of working with insulated concrete form (ICF), which was the building system that Dheeraj decided to use for the Maliks’ new home.

Dheeraj says: “We came across ICF when we were researching building technology. It was fine in terms of planning approval – at Graven Hill they’re open to a range of construction techniques. We talked to a contractor, viewed some properties built using ICF, and we quickly became convinced it suited our desire for open spaces and high ceilings.”

As well as being impressed by the high thermal insulation qualities of the 8m ICF blocks, being able to make use of offcuts ensured they kept site wastage to a minimum. Dheeraj also calculated the increased construction speed ICF allows would be better than a traditional brick and block method in delivering within his desired timescale. He was right. While the family rented nearby, building work began in September 2018 and the Maliks moved into their new home just seven months later in April 2019.

That was achieved despite the fact the ICF contractor went bust and Dheeraj had to hire the companies’ employees himself to finish the job. However, while his relationship with the contractor went sour, his enthusiasm for ICF is undimmed. So much so that he joined forces with a friend to set up his own business constructing ‘turnkey’ ICF houses, and at present has contracts to build four homes at Graven Hill.

He says: “Having worked with ICF, and living in an ICF house, I believe in this way of building and it’s important we share the knowledge we have. The insulation is great, the ease and speed of building is fantastic. It’s structurally strong and has design flexibility.”

That design flexibility helped the Maliks achieve the Indian-inspired higher ceilings that they wanted inside. While average UK ceiling height is 2.4 metres, their home has a 3.2 metre ceiling height on the ground floor, with the exception of two elevated areas of 6.2 metre height – one of which is the spectacular entrance hall. All the rooms on the first floor boast 3 metre-high ceilings. Those dimensions did mean extra was spent on doors that were taller than the usual 1.98 metre size: “As soon as you go above standard, it’s bespoke and that costs triple,” says Dheeraj.

Although his architectural designer was “brilliant” in advising him on costs, Dheeraj was comfortable with overspend where he decided he didn’t want to compromise on design and quality of finish. He says: “My experience in finance means I’m pretty hot at sticking to budgets, but we have gone overboard here and there. However, it was always calculated. I knew we could afford it and it didn’t happen by accident – it was a conscious decision.”

Topping the Maliks’ new home is a roof on two levels – one part is pitched, the other is flat. “I didn’t want a traditional full-pitched roof or something completely flat, which looks boxy, so I went with a hybrid,” Dheeraj explains. “The pitched roof allows a 6 metre-long bi-fold door on the third storey that gives views of the nearby hills. The space is essentially an attic now but could be converted for living space in the future.”

With the family renting nearby, Dheeraj was able to be onsite during construction before and after his working day. He also took one six-week period off work to focus on the build, and says that he “loved” project managing the building process himself – with occasional input from architectural designer David Paynter. “I was surprised to find that I was a natural,” Dheeraj adds.

Other features at the Maliks’ new home include underfloor heating on all floors and a mechanical ventilation heat recovery (MVHR) system. The MVHR, like so much of the house, is fully automated. Switches in each room, which in a traditional house might only control the light, can be programmed to perform eight different touch functions including heating, ventilation, light and music. Says Dheeraj: “The electrician said our house has got more cabling than a small factory, but I see it as future-proofing as much as I can in a world where technology is evolving so quickly.”

The plot, foundations and complete build, including professional fees, cost a little over £1m. It was funded from the sale of the Maliks’ house in Slough, another property and some savings. Dheeraj says: “We do have a residual mortgage – but that’s really down to the overspend. We could have finished the house for £200,000 less but then we wouldn’t have quite the house we wanted. We’ve already had a party for 60-odd people here and it didn’t feel overcrowded. That was our target all along, and we’re delighted with what we’ve achieved.” 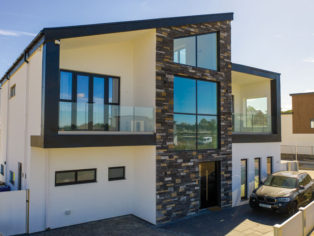