Increasingly used in modern railway station design, security glass is not only an aesthetically useful material, it helps to make these busy public spaces safer.

The UK’s railway stations are visibly benefiting from significant overall investment in the network. Forlorn and unloved buildings are being restored and modernised, reinvented and even completely replaced to meet today’s travel needs – and creating some striking architecture in the process.

London’s Kings Cross, St Pancras and London Bridge stations, along with Reading, Manchester Victoria and Birmingham New Street are among the high-profile symbols of this new era – with many more new and redeveloped stations in the pipeline over the next decade and beyond.

Glass features strongly in contemporary infrastructure architecture. Whether used structurally, for cladding, to provide natural light or for crowd control, it is a material prized both for its excellent, versatile functionality and visual appeal.

However, today’s station designers are having to take into account two different but equally critical safety-related issues. Firstly, the UK is under the most sustained security alert since World War Two. Amid fears that a major terrorist attack on our soil is looking increasingly likely, the country’s official international terrorist threat level was uprated from ‘substantial’ to ‘severe’ last year.

However, one potential drawback of glass is the way it behaves in an explosion, as Gary Bundy, Technical Director of Sto, a manufacturer of state-of-the-art explosion-resistant glass, explains:

“When a device is detonated in a built-up area, the majority of injuries sustained are not from the blast itself but from the debris – and particularly glass fragments – that fly around with devastating effect.

“An exploding bomb creates an instantaneous release of energy generating heat and a blast wave felt as positive pressure. The blast wave carries destructive power from the seat of the explosion and is deadly to anyone in its vicinity. In its wake though, comes negative pressure, causing debris to fly large distances with potentially catastrophic consequences.”

Clearly, increasing the safety of the building involves selecting the right glass and fixings to reduce blast debris.

“The Department for Transport’s 2012 Security in Design of Stations (SIDOS) Guide recognises the risk of terrorism and the potential for the station infrastruc- ture to ‘include proven and effective protective security meas- ures that will prevent, mitigate or deter attacks from terrorists.”

“Annealed (toughened) glass breaks into sharp shards which are potentially lethal, so glass has always been a focus for safety guidance. The design of doors, windows and shopfronts has been regulated for some years, but recently glass facade systems have been included in safety scrutiny.”

“For station designers there are three areas of concern: the type of glass and its behaviour under blast conditions; the stability of the attachment of the glass to its fixings; and the security of the mechanism used to fix the whole facade system to the building fabric.

“The relevant standard is ISO 16933 2007 – Glass in Building: Explosion-resistant security glazing. This is a procedure for establishing the air-blast resistance of glazing systems – remembering that most of the damage is caused by glass fragments pulled away from the building fabric by the negative force that follows an explosion.”

Reading station, one of busiest parts of the UK rail network, recently completed a four-year redesign and refurbishment that has delivered new platforms, a whole new entrance and a complete reworking of the passenger circulation areas.

“This means glass doesn’t have to be excluded from the range of materials used in public spaces at relatively high risk of attack.”

If this specialised security glass fractures, it breaks into small granules rather than the dagger-like shards created by conventional annealed (toughened) glass.

During manufacturing colour is applied to the surface of the glass, providing an attractive, enamel-like coating offering a permanent, high-quality colour finish. The glass is then bonded to a carrier board, creating a 30mm thick composite panel that can be fixed to the building’s structure with a secure stainless steel or aluminium fixing system.

Specified by Grimshaw, the glass was chosen to combine excellent aesthetic qualities with a robust, safe and easy to maintain surface that was straightforward to retrofit to Reading’s existing structure.

The visual appearance was the starting point.

“It was really important to get the colour absolutely right,” says Grimshaw’s project architect Nick Hawkes. “We specified the RAL colour, which the manufacturer was able to match precisely and consistently.”

In this case, the smoky grey finish provides a contemporary, monolithic colour that runs throughout the concourse areas, ticket halls and one facade. Typically this sort of glass is used as part of a ventilated facade where the system is open jointed. However, for Reading station, a solid face was required to prevent rubbish or cigarette ends being pushed down behind the panels. The solution was to apply colour matched silicon to fill the gaps to give the solid finish required.

The mechanical fixing required by the system was simple to accommodate, as Hawkes explains:

“The original structure was a mix of concrete blockwork and in situ concrete that was structurally sound.

“We wanted simply to clad over the top of it, which meant that we didn’t need to do any remedial work to the surface. The glass cladding is fixed to a metal frame which in turn is fixed to the concrete substrate. It’s a relatively easy system to work with.”

After decades as a gloomy subterranean cavern of a station, the roof is being opened to let light flood down through a gigantic 60m-wide atrium by concept architects AZPA, made from virtually clear lightweight ETFE cells.

“There’s a lot of security quality glass on the concourse level. The whole building – which includes the integrated former Pallisades Shopping Centre – is built on a perimeter of extra-strong, blast-resistant glazing. All glass has to be highly fire-resistant as the concourse and platforms are classed as ‘sub-surface’ and subject to stringent Section 12 underground station fire regulations.”

“Fundamentally this offers better security and wayfinding. The problem with the old station’s dark and cluttered layout meant people couldn’t see each other on the platforms or concourse.

“The new security glass balustrades give people views right across the station, offering visual connectivity, but at the same time, being 1.8m high, they prevent people entering platforms without a ticket.”

In the event of an incident there are much better means of escape now. Instead of the old difficult to find and small exits/entrances, there are three large, clearly defined routes to get out of the station, each combined with new larger exits/entrances.

“People can see the exits very easily through the glass walls and observe others moving towards them. They can choose a more appropriate exit if one looks too busy, which helps prevent everyone cramming into one exit. When people have wider, longer views and can clearly see where they need to go, they’re more comfortable, calmer and less likely to panic.”

Network Rail and Atkins architects, which are responsible for the concept development of the public realm with AZPA, and the ongoing detailed design, have also used security glass to form three ‘lounges’ on the concourse.

When an event – such as a broken escalator – disrupts natural movement on the concourse or platforms, the lounges can be used to hold passengers for a few minutes before they board their train.

“Through the atrium and use of glass on the concourse itself we’ve created safer, light-filled, open- plan space with places to eat and shop, somewhere people will actually want to spend time before catching their trains.”

In terms of station design, security glass is undoubtedly going from strength to strength. 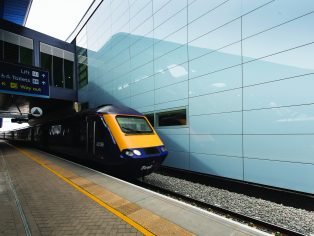