St. Bartholomew’s hospital (‘Barts’) in the City of London was founded in 1123 by Anglo-Norman priest and monk, Rahere, giving the site for Maggie’s Centres’ most recent architectural foray a deep as well as challenging historical dimension. Steven Holl Architects were approached by Maggie’s – a charity devoted to providing free practical, emotional and social support to people affected both directly and indirectly by cancer – to lead the design for a contrasting new extension to James Gibbs’ 1740 hospital building. “One of the reasons we were selected was that we’ve done a lot of new contemporary buildings as extensions to historic buildings,” says project architect Chris McVoy. Steven Holl Architects boast a rich portfolio featuring progressive yet highly sensitive additions to heritage buildings, such as Nelson Atkins Museum of Art in Kansas City, Higgins Hall Insertion for the Pratt Institute in New York City, and the Reid Building at the Glasgow School of Art. As with all Maggie’s Centres, the core aim was constructing a place of refuge where cancer patients can escape from the typical clinical and institutional atmosphere of a hospital. McVoy explains: “The idea is for you to be able to get up and make a cup of tea on your own without anyone’s help. It’s a kind of respite.” He adds: “It has much more to do with how it feels and performs, than technical requirements. It’s about how the building performs for the users. The architect’s role is to use the site as best as possible.” What has emerged from the collaboration is a brave and forward-thinking design which combines an innovative application of materials to house sector-leading facilities, all the while sensitively threading in thoughtful historical references to London’s medieval past.

Maggie’s Barts is more vertically organised than other Maggie’s Centres – and is spread over three floors. This was due to the denser urban location that the scheme was to occupy. It replaces a 1960s brick structure and sits adjacent to a 17th century stone building, housing the Great Hall and the historic Hogarth staircase. The scheme was first envisioned by the architects as “a vessel within a vessel – within a vessel.” The structural frame is composed of concrete, while an inner bamboo layer and outer Okalux light-diffusing glass layer cocoon the interior spaces, and present a gentle aesthetic both internally and externally. Housed within these ‘vessels’ are, on the ground floor, two entrances at either side of the scheme adjacent to James Gibbs’ stone building, which in turn provide access to an open plan kitchen and lounge area, covering almost the entire footprint of the building. “The heart is the kitchen, and the kitchen table,” comments McVoy – the space benefits greatly from its double height. A separate counselling room is located on this floor, along with several seating areas and a secluded ‘pause area’ for users needing greater privacy. A bamboo staircase runs around the periphery. The first floor accommodates further seating areas, a library, and two more separate counselling rooms, where patients can receive advice and consultation from specially-trained staff. Ascending via the stair to the third floor, the user meets another open plan area serving as a yoga, Tai Chi, and event space. This opens onto a roof terrace featuring flowering trees, meeting the charity’s requirement for a garden on this tight infill site. “From there you can look out over trees and historic buildings – you feel like you’re in a British village, not in London,” says McVoy. McVoy notes that the planning process was long and drawn-out, with the planners requiring that the building link to the site’s heritage buildings, including the Great Hall located inside the adjacent original stone building. Accordingly, each floor provides direct access to its neighbours. In addition, new toilets in the basement of the centre and a new lift also provide the Great Hall with functional amenity as part of the planning agreement.

Regarding the design intent for the building’s exterior, Steven Holl uses the term “complementary contrast” to the creation of an authentically new piece of architecture that also doesn’t overwhelm the pre-existing buildings it adjoins. McVoy adds: “In order to be complementary, you don’t have to fit into the exact historical style. We don’t build in thick stone now, so why should we add in stone details that are just a few inches thick?” In this spirit, the new building was to have “a translucent glass skin that would be full of light, and soft, in contrast to the heavy stone facades of the surrounding historical buildings,” comments McVoy. The curved corners of the new centre were also designed in homage to the stone corner quoins of the original Gibbs buildings. The outer layer of the facade is composed primarily of matte white glass, arranged into 90 cm horizontal bands designed to resemble a musical stave. Its surfaces are etched both inside and out to produce a soft white membrane decorated with coloured glass fragments representing the ‘neume’ system of notation used in 13th century medieval music. The word neume has its etymological roots in the Greek word ‘pnevma’, meaning ‘vital force,’ which also spoke to the designers. As they put it in their statement: “It suggests a ‘breath of life’ that fills oneself with inspiration like a stream of air, the blowing of the wind.” The concrete structure beneath the glass “branches like a hand.” The ancient notation was also chosen by the architects for the facade to allude to the parallels between both the temporal and spatial effects of music and architecture. “Music engulfs you, it surrounds you,” says Holl, “and it has in it the quality of time. And, architecture surrounds you in the same sense. And as you move through, it has a sense of time.” He continues: “I think there’s something very similar about these two arts, and what’s interesting to me is when music inspires architecture.” When quizzed on how the building fits stylistically into the architects’ portfolio, McVoy echoes these thoughts, crediting light, along with time, as the primary creative inspirations for Steven Holl Architects’ buildings. In the context of Barts, the three-floor elevation and semi-translucent skin enable these themes to manifest fully. As the user moves into the building and ascends from the kitchen area, “each level unfolds in a different way.” McVoy emphasises how the elements of light and time work together at Maggie’s Barts. As day turns to night, the coloured glass elements slowly become more vivid from the building’s exterior as lighting glows from inside, while during the day coloured light is filtered through the building envelope and projected into its spaces. The complementary ‘neume’ colours were hand-selected by Steven Holl based on a set of studies. The building’s shape as well the material specified for the facade placed limitations on where the colour could be applied. Okalux glass is manufactured with short lengths of straw-like fibres in the material, and due to its physical properties colour could be applied only to flat surfaces. Some of the glass is both sloping and curving, “like a J-shaped hockey stick.” The architects discovered these parts could not be tempered, as McVoy notes: “You can’t heat-strengthen it because it would crack, so it’s laminated for safety.” In collaboration with Okalux, the architects experimented with various means of getting the colour into the glass, which concluded with a method consisting of placing film between two layers of the material. “We loved that because the colour at the edges of the film begins to blur because of the ‘straws’; the blur changes depending on the angle you’re looking at it,” remarks McVoy. “We worked very hard to develop that with them.” The centre also benefits from the insulating properties of the glass, which helped the building meet its energy goals. There are also two patches of clear glass on the centre’s facade; one at the James Gibbs Square entrance, which appears to lift the ‘musical stave’ from underneath as it slopes upwards around the envelope, and one on the roof – looking onto the roof terrace.

Openable windows are dotted around the building at regular intervals, allowing patients and staff to manually ventilate spaces, and space-saving sliding doors have been installed. In addition, staff and patients can slide the rooftop door open to let the outside in, and are free to move the seating and tables if needed. All of these features give users just that little bit more agency in contrast to the neighbouring hospital, where furniture is fixed, rooms usually have closed doors, and windows cannot be opened by users. Diffusing through the glass skin comes “boundless, glowing light,” comments McVoy, with the bamboo “giving a warmness that complements the concrete” on the interior, conjuring an overall calm feel for users. Another key feature for user wellness is how acoustics are controlled in the design of the building’s atrium, meaning that even when the centre is at maximum capacity, users can still easily hear the person they’re talking to, while also feeling enveloped in comforting background sound. Laura Lee, chief executive of Maggie’s tells ADF about the effect of the charity’s newest building: “Our visitors always comment on how uplifting the centre is from the moment you walk in. The light and different areas and floors give people the option of sitting with other visitors at places like the kitchen table, or on the rooftop, or sitting alone in one of the armchairs to read or take a moment to reflect.” Summing up the utility of the facade design, Lee says: “The soft grey frosted glass blends into the surrounding buildings, but the modern design allows the centre to be recognisable enough for people who are looking to visit.” It’s this sensitivity to both the site context and intended users which makes Stephen Holl Architects’ building a worthy, and appropriately distinctive, addition to the much-praised collection of Maggie’s Centres. 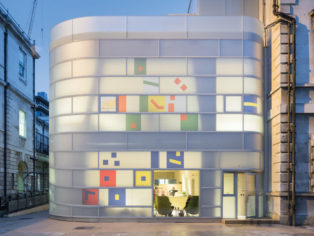 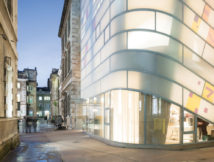 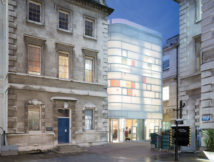 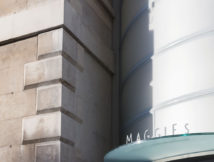 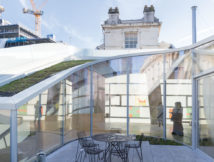 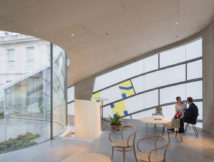 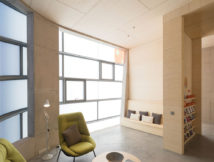 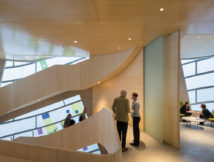