The UK’s ageing population poses a host of challenges, from pressures on the domestic economy to stress on already strained public services. There is a specific and pressing need to house an increasing number of elderly citizens with ranging abilities, needs, and demands.

Woodlands Court is a new residential build in Swanley, Kent, which follows on from its elder sister, Bonney Court, both having been designed by Pellings for West Kent Housing Association. Bonney Court and the new scheme together form part of a “hub and spoke” community for over 55s, while the nearby White Oak Court provides “hub” facilities to residents which include hairdressing, clinics and dining amenities. Woodlands Court acts as the newest “spoke” to the scheme which altogether aims to provide an enhanced offering, maximising the freedom of residents and their ability to live independently.

The scheme, built by contractor Chartway Group, had as its objective to provide accommodation in one and two-bedroomed apartments and make use of the pre-existing leisure amenities. A total of 31 units have been created to replace the 16 homes previously on the site. A key driver for the scheme was West Kent’s “Age – A Positive Experience” strategy, which seeks to provide homes that anticipate people’s changing needs and help them live independently for as long as possible.

Design brief
“Woodlands Court provides accommodation for the over-55s on the same basis as our hugely successful Bonney Court development just around the corner,” explains West Kent’s housing director Deborah White. “That scheme has proved so popular that we decided to provide more of the same.” The design brief for Woodlands Court was, therefore, largely to replicate Bonney Court, which was finished in 2010.

The new development, however, would include more units than its older sister. West Kent Housing Association also demanded that basic later-living principles be adhered to throughout the design, such as the need to accommodate scooters and wheelchairs, as well as being flexible to users’ various needs. Bathroom and kitchen facilities were also to be tailored depending on residents’ needs.

Given the site’s location, directly adjacent to Swanley Park, there were challenges in terms of planning. “The planning policy considered the site an amenity green space due to its open nature, even though it was in private ownership,” says Penfold. “After we were able to argue our case successfully, the plot was not in a conservation area so we had relatively free reign.”

Plan & provision
Penfold describes the design intent for the scheme in terms of its context: “We wanted to establish a strong presence on the corner by creating a communal court.” Two entrances were created; one on the building’s eastern flank at Moreton Close, and one to the south on Northview, both accompanied by private parking facilities. In plan, Woodlands Court takes the shape of a horseshoe, enclosing a central courtyard. Penfold highlights the steep topography of the site as a principal design challenge for the team. However, they took advantage of it and maximised on the views over the adjacent park.

“We wanted to keep to quite a traditional design,” says Penfold; “a pitched roof building, fitting in with the general feel of suburbia – that was the lead.” Initially, the design was for a four-storey building, however this was reduced to three – two plus the pitched roofs – to better blend in with surrounding buildings. In terms of materials, the building envelope combines timber cladding, zinc panels, and brick and render which together serve to “form three distinct elements to break the mass up”, according to Penfold.

Accessibility, comfort & sociability
According to the architect, “it was essential that flexibility be designed into the scheme”. A percentage of the units are designed for wheelchair accessible shower rooms and each flat has the capability of accommodating a Class 2 mobility scooter, as well as secure space at ground floor level for Class 3 mobility scooters.

“As part of the planning process, we consulted the existing residents living at Bonney Court,” explains Penfold. Current tenants were surveyed on their knowledge and use of existing services, the barriers to using them, and which services they valued, as well as what they would like to see provided in the future.

Emerging from this came the clear mandate for a communal lounge, central courtyard, and smaller breakout spaces on each floor with small sofas, as well as spacious rooms in each apartment – compared to NHS accommodation standards. These were all measures taken to make the living environment as welcoming as possible, while instilling a clear sense of sociability into the scheme.

White concludes on the importance of embedding sociability in such projects: “We know that loneliness can be twice as unhealthy as obesity. We must build more than just good quality homes.” 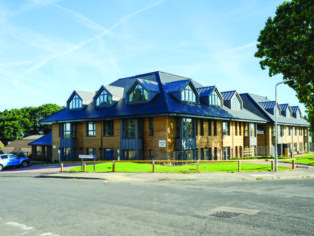